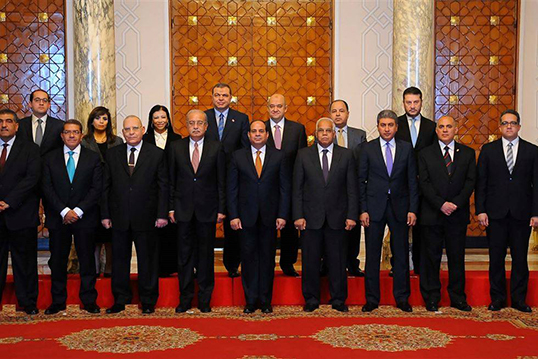 Since the January 2011 uprising, the Egyptian economy has been floundering. Economic growth has averaged a dismal 2.5 percent a year, the average unemployment rate has been close to 13 percent, with youth unemployment reaching 35-40 percent, and inflation in the double digits.

The picture on the external side is equally bleak, as evidenced by recent shortages of foreign exchange, and continual pressure on the Egyptian pound. The trade balance, measuring the difference between exports and imports, has been in deficit to the tune of $20 billion a year. Tourism collapsed in the wake of political upheavals and security scares, and foreign direct investment, considered an important indicator of a country’s economic prospects, amounted to less than half the inflows received in the five years prior to the start of the Egyptian revolution. The Central Bank of Egypt’s (CBE) reluctance to let the currency depreciate in the past five years has resulted in a loss of about half of its foreign exchange reserves.

During 2011-2013, there was virtually no major economic policy initiative undertaken by successive governments. During 2014-2015, there were some actions that gave rise to a degree of optimism that a turnaround of the economy was underway, or at least imminent.

First, the government of President Abdel Fattah al-Sisi took a major step to reduce subsidies in July 2014 by increasing fuel prices and electricity tariffs. However, even after the reforms, subsidies remained large, at 8.5 percent of gross domestic product (GDP), down from 10 percent previously. The expectation was that further cuts in subsidies would follow, but this has yet to happen.

Second, the government launched a number of megaprojects aimed at improving the country’s infrastructure. These included, among other things, the expansion of the Suez Canal, building a new administrative capital, and the construction of one million housing units. The Suez Canal project was completed in the record time of a year at a cost of $9 billion, financed entirely by Egyptian investors, and inaugurated in August 2015. However the other megaprojects remain on the drawing board.

Third, the government organized the Economic Development Conference in Sharm al-Sheikh in March 2015. At that conference, Egypt signed investment deals worth $38 billion and received additional pledges of support from Gulf Arab countries. More than half the deals were in energy-related projects and construction. So far, the pledges made at the conference, with the exception of the promises of the Gulf countries, have yet to be fulfilled.

This year, there have been important signals that the government of President Sisi is finally ready to move aggressively on the economy. On March 23, the government announced a major cabinet reshuffle that brought in a new economic team. Then a week later, Prime Minister Sherif Ismail presented the government’s plan to revive the economy to the parliament.

The major change in the economic team was the appointment of Amr al-Garhy, a well-regarded banker who has held leadership positions in several financial institutions, as Minister of Finance. Another banker, Dalia Khorshed, was appointed Investment Minister. Ashraf al-Sharqawy, who had previously served on the boards of state-owned Banque Misr and the CBE, was made Public Business Sector Minister. All three of these new ministers join Tarek Amer, Governor of the CBE, who also has a banking background. The Minister of Planning Ashraf al-Araby, Minister of Trade and Industry Tarek Kabil, and Minister of International Cooperation Sahar Nasr retained their posts and round off Egypt’s economic team.

While the new economic team brings in individuals with extensive private sector and financial experience, it is not clear that they have the necessary expertise and experience to undertake the structural economic reforms that Egypt desperately needs if it is to break out of its current economic malaise. This is in sharp contrast to the past decade, going back to the Hosni Mubarak era, when there were several economists in the cabinet. While this is not to say that having an economics background is necessary for success in reviving the economy, it is admittedly helpful to have policymakers with a broad economic vision and knowledge of the policies to achieve it. Many of the major problems in Egypt are in the real part of the economy and not in the financial sector. An economic team heavily weighted with financial experts may find it difficult to address these problems.

The new economic plan, unveiled by Prime Minister Ismail, has a long list of objectives to be achieved by the end of fiscal year 2017/18. The main targets

The list of objectives is extensive and quite precise, and if met, would indicate a clear turnaround in the Egyptian economy. So the next obvious question is: what are the policies and reforms necessary to achieve these objectives? Here the economic plan is much less specific. The only concrete policy action in the plan is the introduction of the value-added tax (VAT) to replace the Generalized Sales Tax (GST). While not explicitly included in the economic plan, the move to a flexible exchange rate regime announced on March 14 can be added to the set of policy actions. Other reforms in the plan are more general. The plan calls for reforms to develop the private sector, streamline investment and business regulations, combat corruption in the bureaucracy, reform state administrative bodies, and boost education, housing, and health facilities for lower-income Egyptians, but does not spell out the details of these reforms.

In summary, the new economic plan is long on objectives and short on policies. As yet, the plan has not impressed the international financial institutions. The International Monetary Fund (IMF) and the World Bank are both projecting growth in 2016 to be only 3.3 percent, and about 4.2 percent in 2017. The key to reaching a target of 5-6 percent growth by mid-2018 and then above 6 percent in later years, is investment. It will require a significant increase in investment from the current rate of 20 percent of GDP to at least 25 percent. The plan is silent on the size of the increase in investment, and therefore on how this increase will come about. Furthermore, it is important to examine the composition of this higher investment. Will it be primarily public investment, i.e. the megaprojects, or private investment?