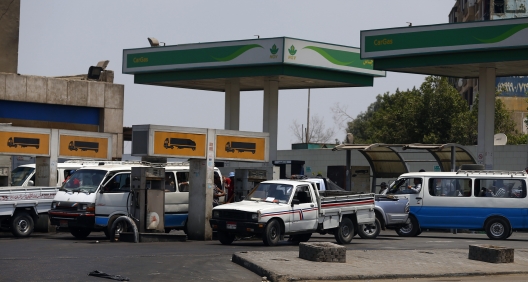 Photo: A microbus waits with other vehicles for fuel at a petrol station in Cairo July 6, 2014 (Reuters/Amr Abdallah Dalsh)

As part of the budget for the current fiscal year 2014/2015, the Egyptian government took a bold step to reduce fuel subsidies on July 4. Gasoline prices were increased by an average of 42 percent, with the lowest octane gasoline price rising by 78 percent, diesel by 64 percent, and compressed natural gas by 175 percent (Table 1). The government also simultaneously announced that electricity prices will double to eliminate power subsidies over the next five years.

This sudden move on fuel prices caught most observers and the Egyptian population by surprise. There was of course considerable speculation that the new government of President Abdel Fattah al-Sisi would have to move on subsidies because the fiscal costs of maintaining them was getting progressively unbearable. Subsidies for gasoline and diesel alone amount to 6.3 percent of the country’s GDP, only slightly below the comparable rate of 6.5 percent in Saudi Arabia, which as a wealthy oil producer can better afford them. Egypt cannot. Furthermore, if one adds subsidies for electricity and food the total amount swells to 11 percent of GDP and eats up more than a quarter of government expenditures in the budget.

The problems that subsidies create for public finances, and more broadly for the economy, are well known and have been debated for decades in Egypt. However, successive governments have been extremely wary of reforming the expensive and inefficient subsidies system. In a sense, subsidies were the “third rail” of Egyptian politics and no government was ready to touch them. Even Hosni Mubarak, with his almost total control of the political space, stayed away from subsidy reforms fearing the political fallout. The memory of the 1977 Bread Riots have not faded from the minds of Egyptian leaders.

At a technical level, the solutions to the problems of generalized subsidies are fairly straightforward and perfectly understood by Egyptian policymakers. Basically, they amount to removing price controls on fuels that give rise to subsidies, and protecting the poor from these price increases by offering them some type of cash-transfer as compensation. However, this is easier said than done because in Egypt, a culture of “subsidy entitlement” has become embedded over the years. All income groups, rich and poor alike, believe they are entitled to cheap gasoline, electricity, and natural gas. Compensating the poor from the costs of price increases when subsidies are removed still leaves a large segment of the population unhappy and opposed to any reform.

Recognizing this fact, all three governments that followed the uprising in January 2011, simply paid lip service to subsidy reform and left it to the next government to implement—effectively kicking the can down the road. President Sisi, taking advantage of the honeymoon period following his election and the desire of many Egyptians for “stability,” has taken an important step in reforming subsidies in the context of the first budget produced by his government. While some could argue that this was only a small step reforming subsidies, it is undoubtedly a critical first step in the process.

Even after the July set of reforms, subsidies in Egypt remain large. Subsidies (and social benefits) still amount to 30 percent of the budget for 2014/2015. In the previous year subsidies for petroleum were over EGP 150 billion. In this year’s budget they are projected to be EGP 100 billion, a saving of EGP 50 billion. But gasoline prices in Egypt are still low by international standards. For example, after the price increases 92-octane gasoline will cost only $1.43 a gallon—some $2 below the comparable US retail price, and well below European prices.

The impact of the fuel price increases on the fiscal accounts will certainly be positive. The government estimates that the reduction in subsidies, combined with increases in some taxes, will bring the fiscal deficit down to 10 percent of GDP this year from 12 percent last year. Inflation will of course rise, possibly adding as much as 2-3 percent to the current rate of around 9 percent as the fuel price increases work their way through the economy. The effect on economic growth and employment will be negligible.

What next on the subsidy reform agenda? The International Monetary Fund (IMF) has argued that a successful subsidy reform has at least four key components.

Egypt obviously dispensed with the communications campaign by seizing the moment and bringing in fuel price increases without too much preparation and fanfare. Given the muted protests in the aftermath of the announcement of price increases, this turns out to have been a good strategy. While the IMF has a point that a government should take time to prepare the public for price increases, the counterpoint to this is that it also gives the public time to prepare its opposition. Now that the process has been initiated, the government needs to articulate and communicate its longer-term energy sector and subsidy reform plan. The plan should spell out how prices will be changed on a set schedule over say a five-year period. The government already has such a plan for electricity prices and a similar one for fuel prices, which should also be communicated to the public. Naturally the plan should include measures to protect the poor through a system of targeted cash-transfers.

Egypt has taken a historic and difficult step in reforming subsidies. However, there is still a long way to go if the objective is to reduce subsidies significantly. Setting a path for achieving this objective and then faithfully following it is the next stage. It will be difficult, but is necessary.