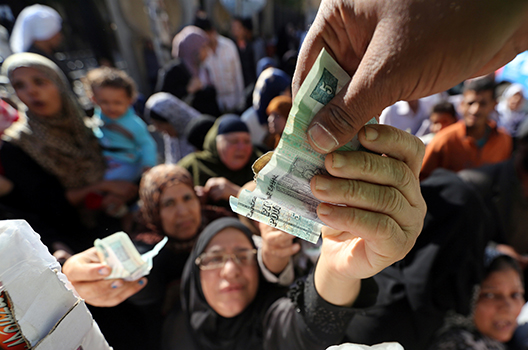 Egyptians gather to buy subsidized sugar and oil from a government truck, after goods shortage in retail stores across the country and after the central bank floated the pound currency, in downtown Cairo, Egypt, November 7, 2016. (Mohamed Abd El Ghany/Reuters)

On August 11 this year, the Egyptian government, the Central Bank of Egypt (CBE), and an International Monetary Fund (IMF) staff team reached an agreement on a three-year economic program under the IMF’s Extended Fund Facility worth $12 billion. The announcement of the agreement was greeted with considerable fanfare, as it showed Egypt was ready, with the help of the IMF, to undertake serious and necessary reforms to bring the economy out of the woods.

The two principal objectives of the program were:

The program was expected to be put to the IMF Executive Board in a matter of weeks. After approval Egypt could expect to receive the first tranche of $2.5 billion in early September. Yet almost three months later, the program has not received formal approval. Getting the IMF’s endorsement and financing is a matter of urgency, as Egypt is in dire straits with the economic steadily worsening on various indicators – growth, employment, the external balance of payments position, the fiscal situation, to the name the most important ones.

Why then the delay? On October 8, IMF Managing Director Christine Lagarde gave a strong clue on the hold up. Specifically, she said that some of the preconditions, or “prior actions” in IMF parlance, that Egypt had accepted had not been fulfilled. The IMF Executive Board would only consider Egypt’s request once the government and the CBE fulfilled these prior actions.

While the precise details of the program have not been made public as yet, it is widely believed that there were three main prior actions:

The Egyptian government made some progress on the first two prior actions during the last couple of months. In mid-October, Prime Minister Sherif Ismail said that Egypt had mustered some 60 percent of the required $6 billion in external financing, largely in the form of deposits placed in the CBE by the United Arab Emirates and Saudi Arabia. It is likely that the full amount will be available soon, with the IMF announcing that it held productive talks with China and Saudi Arabia to fill the $6 billion gap.

On the budgetary side, the parliament passed the Value-Added Tax (VAT) law on August 29 . The IMF had originally wanted the VAT tax rate to be set at 14 percent, but parliament wanted to move more gradually and agreed to 13 percent for the fiscal year 2016-2017 and 14 percent in the following year. This would be acceptable to the IMF as a good compromise. Cutting subsidies on fuel, electricity, and particularly food, is a politically sensitive issue in Egypt – often referred to as the “third rail” of Egyptian politics. But the government has shown that it can take politically difficult measures on this front. In July 2014, the government took a major step by raising fuel prices across the board and introduced a five-year plan to increase electricity prices and eventually eliminate the subsidy. The process to further reduce subsidies, apart from an increase in electricity prices in August this year, then stalled until last week when  fuel subsidies were cut again. Reducing food subsidies in the current environment is not an option, with inflation running at 14 percent and likely to rise further. In fact, in agreement with the IMF, the government plans to increase food subsides in December.

The obvious sticking point in the prior actions has been the exchange rate. Even though Egypt’s exchange rate system has been classified by the IMF as “managed floating,” successive governments and the CBE have been very averse to floating and have had a strong preference for managing the rate within certain bounds. In that sense, the exchange rate has been more managed than floating. This fear of floating stems largely from the belief by the CBE that the pound would be susceptible to sharp movements that would generate uncertainty for importers and exporters and that large depreciations would be inflationary via increases in import prices. Nevertheless, in March this year, the CBE devalued the pound by 13 percent to EGP 8.85 per US dollar and said it was planning to move to a more flexible system down the road. While acknowledging that a more depreciated pound would increase exports by making them more competitive, reduce imports by increasing their costs, and attract foreign investments, the CBE did nothing from March this year on the exchange rate. Instead, it relied on a mix of foreign exchange intervention, interest rate hikes, and controls on foreign exchange purchase and transfers to maintain the US dollar value of the pound.

Even though foreign exchange pressures were becoming progressively untenable, the government and the CBE tried to stay the course and maintain stability of the exchange rate. The lack of sufficient foreign exchange reserves and the IMF’s insistence on flexibility as a prior action finally forced the CBE’s hand. On November 3, the pound was floated and fell immediately to EGP 14.65 to the US dollar. By November 8, it had sunk to EGP 17.8 to the US dollar, about half its value when the rate was fixed at EGP 8.8 per US dollar and close to the rate prevailing in parallel market on November 4. This sharp decline has cut Egypt’s nominal GDP (in US dollars) by half from $350 billion to $170 billion.

Although it was expected that moving to a floating exchange rate would result in a substantial devaluation of the pound, the size of the fall in a matter of days was a real surprise. Obviously, the decline in the pound would have been much less had the CBE moved to floating when it devalued in March, as many recommended. Furthermore, it is also true that once a currency starts to depreciate in a market setting, the dynamics of where the rate will go are difficult to predict. What economists and financial analysts call “overshooting” becomes a reality. In other words, the currency can fall dramatically, driven by expectations and not the fundamentals of the economy. It is possible that this is what is happening in Egypt now as there is no obvious economic reason why the Egyptian pound should fall by more than 100 percent in value in a few days.

While there is good reason to believe that with appropriate policy actions, in particular raising interest rates, and the approval of the IMF program now that this prior action has been taken, the situation will reverse and the pound will strengthen and regain some of its lost value. Market traders and financial investors may also feel that this is a good time to buy assets denominated in Egyptian pounds to get a capital gain when the currency starts to appreciate in value. The sharp rise in the stock market this past week lends credence to this view.

Now that a decision has been taken finally to adopt a flexible exchange rate system, Egypt will have to change its monetary policy regime. So far the main objective of Egyptian monetary policy has been to maintain stability of the pound, with inflation control as a secondary objective. In the new environment of a flexible exchange rate regime, the priorities will have to change with inflation becoming the principal objective of monetary policy. The depreciation of the Egyptian pound is undoubtedly going to create inflationary pressures, although perhaps not as large as some might think, for two reasons. First, the “pass-through” from exchange rates to inflation is relatively small and weak, not least because imports represent less than 20 percent of GDP. Second, it is argued that the current rate of inflation already reflects to an extent the value of the pound in the parallel market, which coincidentally had reached EGP 17 to the US dollar prior to the CBE’s change in its exchange rate regime.

Although it has been a bumpy ride since August, it would seem that with all the prior actions having been met, the IMF staff can now take the program to the IMF Executive Board for approval. Indeed, Egyptian Finance Minister Amr El Garhy said on November 7 that the formal request for a board meeting will be sent in days. This time, all indications are that it will happen soon.

Mohsin Khan is a Nonresident Senior Fellow at the Rafik Hariri Center for the Middle East focusing on the economic dimensions of transition in the Middle East and North Africa.

Elissa Miller is an Assistant Director in the Atlantic Council’s Rafik Hariri Center for the Middle East.