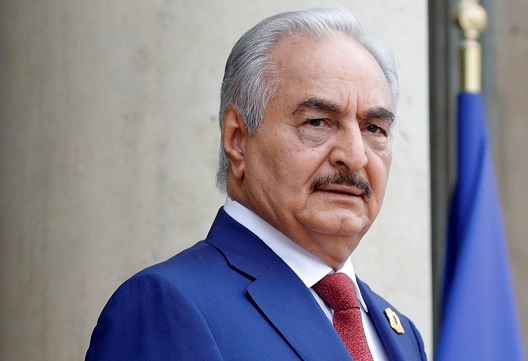 Read in Italian here. The military forces under the command of General Khalifa Haftar launched a large-scale attack on the Fezzan region in January, with the aim of taking control of the main areas of local oil production. Officially motivated by the need to strike at terrorist units operating in the region, the mission led by General Haftar has two main objectives. The first consists of securing the local oil installations, thus subtracting a substantial quota of production technically under the control of Tripoli—even if operated by the National Oil Corporation (NOC), which continues to exercise its functions in a paradoxical dual mode at the service of both political entities. The second objective is to extend the territory under the control of the so-called Libyan National Army (LNA), thereby lessening an opportunity for the Tripoli authorities to maneuver while consolidating the political and military capacity of Benghazi’s forces.

The conduct of this military campaign has involved an exceptional deployment of men and means, including some planes, demonstrating the determination of General Haftar in resuming the offensive against the allied forces of the government of Tripoli.

On February 9th, the El Feel oil installation was hit by three different aerial actions aimed at intimidating Ali Kennah, commander of the Sebha militia and an ally of the UN-backed Government of National Accord (GNA).

The El Feel oil field is operated by a subsidiary of the NOC and an Italian company, ENI, and produces around 70,000 barrels a day. The security of the surrounding territory is largely ensured by the Ali Kennah militias, which were formally directed by Fayez al-Serraj to command the Sebha region in the first week of February.

The air raid conducted by General Haftar’s forces was framed in the press as a “warning” to the local military commander, and, thus, is a signal to the GNA itself, with the intention of reaffirming authority over production facilities, as well as the exercise of territorial security.

Also on February 9, the spokesman for the LNA, Ahmed Al-Mismari, announced that the LNA had taken control of the El Sharara oil installation, the largest in Libya. In the following days, however, it emerged that the LNA forces had not yet managed to access the El Sharara camp facilities, occupying only a few peripheral facilities, while access to the main camp—apparently abandoned by the local militias before the arrival of the LNA forces—would not take place until February 12.

The news of the LNA gaining control of El Sharara and the subsequent denial have fuelled critical speculation in the Libyan press—especially the one closest to the government of the GNA—and some media have reported they are convinced that the forces of the LNA have not yet managed to enter the main camp. This comes despite numerous images of LNA soldiers circulated within what seems to be the main facility of the field. The military operation for the control of the El Sharara facilities was conducted by the militia known as Brigade 173, under the command of a Tuareg called “Aghlas,” which joined the consortium of military formations that make up the so-called army of Khalifa Haftar.

The intervention of the LNA forces was instead denounced as a terrorist act by the GNA forces of Tripoli, while Fayez al-Serraj formally asked the United Nations Security Council to condemn General Haftar’s activity in the region and order it to stop.

Several times in the last years, the Italian intelligence has pointed out to political authorities the growing French activism in Libya, characterized by the ambiguity of officially supporting the government presided by Fayez al-Serraj on one hand of coordinating with General Khalifa Haftar and the military projection of the LNA units on the other.

The growing domestic tensions of the Italian political system, however, have determined a general decline in attention towards foreign policy—in particular, the Libyan crisis—and, the recourse to a strongly anti-French narrative. This, however, has been fed not by the pre-eminent national interest in Libya, but rather by a superficial criticism of France’s post-colonial relationship with some West African countries. The vast range of reasons that Italy could have expressed in support of its criticism over French action in Africa, therefore, has been ignored through the trivialization of a narrative that has been easily and vigorously opposed and denied both by France and African actors (specifically those who benefit from the adoption of the West African CFA Franc currency).

In this way, therefore, the size of the French commitment in Libya and the direct support to General Haftar—which should constitute the main factor of interest and fear of Italy—have been largely neglected by the executive; determining the need for an autonomous mission of the Italian external intelligence (AISE) during the first days of February upon urgent invitation of the GNA authorities.

In Tripoli, together with a large Italian delegation, the vice-director of the Agency, General Giovanni Caravelli, personally met Prime Minister Fayez al-Serraj, and numerous members of the Presidential Council. Although no official communications were made on the sidelines of the visit, it is fair to assume that the Libyan Prime Minister asked Italy for guarantees and coordination to contain the expansion of territorial control of the LNA in Fezzan.

The Italian intelligence mission in Tripoli was followed by some Libyan online sites and by the announcement of an imminent and equivalent French mission, led by Emmanuel Macron’s advisor for Libya and the region, Paul Soler, who was accompanied by the top management of the French external intelligence for North Africa (DGSE). The local press closest to General Haftar’s political positions hastened to argue that the purpose of the mission would be to offer political and military support to al-Serraj, especially in contrast to the role of local Tripolitanian militias, in order to make the French position appear as impartial as possible.

However, it is evident that France, unlike Italy, has defined a precise strategy for its intervention in Libya and is supporting it adequately on both the political and military levels. The vision of Paris is substantially based on the will to act as a political actor of reference of the Libyan political transition, to the detriment of Italy and through the identification of General Khalifa Haftar as primary actor of the transition process. Such a position, moreover, fully satisfies the logic of the intense and ever-increasing relationship of France with the United Arab Emirates, which are the main political and economic promoters of General Haftar. Industrial relations in the defense sector between Paris and Abu Dhabi represent, in fact, an element of primary importance of the French national interest, the pursuit of which is the result of a precise and rigorous political and economic calculation.

France’s interest in the government of Fayez al-Serraj, officially recognized by the United Nations and the international community, is therefore to encourage acceptance of General Haftar’s role and position in the process of national reconciliation. France and the political leadership in Tripoli are well aware, however, of the general’s real political ambitions, in which he aims for full and absolute control of national politics – making the process of national reconciliation impossible.

It is therefore clear that the positions and interests of Italy and France are in total opposition to each other. For Italy, Libya assumes a connotation of strategic and vital importance from the viewpoint of energy and security policy; for France, the country represents a mere potential opportunity.

The overall picture of Libya is rather complex and often not easy to read. The first layer of the political dimension remains characterized by the contrast between the Government of National Accord (GNA), led by Fayez al-Serraj and officially recognized by the international community, and by the Parliament of Tobruk, to whose orders—ideally—respond to the so-called Libyan National Army under the command of General Haftar. This division, officially built on the opposition of the Parliament of Tobruk in conjunction to the Islamic organizations within the GNA of Tripoli, hides, on the contrary, the personal political ambition of General Haftar to take political control of the country with support from Egypt and, above all, the United Arab Emirates, in the fight against the Muslim Brotherhood, of which some Islamic organizations in Tripoli are an expression.

The power struggle between the two apical components of the political clash, however, are expressed through the military capacity of the militias which support them and on the whole set of interests—above all, economic—which revolves around the areas placed under their control. This balance, therefore, makes the dimension of the apical political framework rather aleatory and unstable, placing objective difficulties in the search for a concrete and lasting solution.

While the position of Fayez al-Serraj is judged as structurally weak—a consequence of the absence of a direct military capacity under the command of the authorities of the GNA of Tripoli and the contextual necessity of resorting to the protection of the militias present on the territory of Tripolitania—General Haftar is widely recognized by the international community as an expression of a cohesive and less conflictual military system. The military solidity of Haftar, however, is also built on the role of a plurality of militias, often with conflict amongst them and characterized by what is often considered a temporary common interest, in the perspective of the consolidation of their own.

The evolutionary scenario of the current crisis, therefore, evokes a pessimistic outlook regarding the possibility of a peaceful solution of the contrasting local political and military interests, above all, in the light of the growing foreign interference and the wider dimension of the interests behind it, from Europe to the Persian Gulf.

Karim Mezran is a resident senior fellow at the Rafik Hariri Center for the Middle East. Follow him on Twitter @mezrank.

Image: Photo: Khalifa Haftar, the military commander who dominates eastern Libya, arrives to attend an international conference on Libya at the Elysee Palace in Paris, France, May 29, 2018. REUTERS/Philippe Wojaze/File Photo