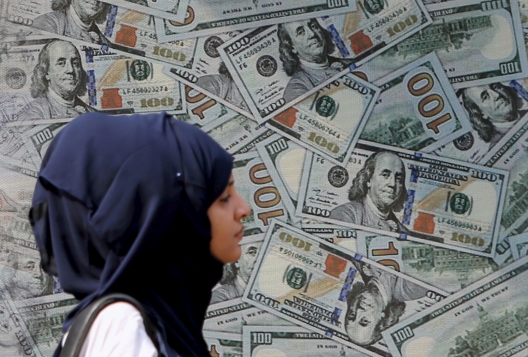 On assuming office in June 2014, President Abdel Fattah al-Sisi committed to revive the Egyptian economy, which had been in the doldrums for the past several years, and set it on a path of sustained high growth and low unemployment. To achieve this objective he identified a mixture of populist and traditional free-market policies to address the challenges of massive youth unemployment, high internal and external debt, low foreign exchange reserves, and a serious energy crisis. The three main pillars of the Sisi economic plan were:

Actions on these three fronts in late 2014 and early 2015 led to considerable optimism that a corner was being turned in Egypt’s economic fortunes, and that 2015 would be a much better year. In some respects this turned out to be so. Growth in 2015 rose to 4.2 percent, almost twice the rate of 2.2 percent registered in 2014. However, this increase in the growth rate did not have much of an impact on the unemployment rate which remained close to 13 percent, with youth unemployment still hovering at almost 40 percent. Furthermore, inflation rose to 11 percent from 10 percent in 2014. A bold step was taken to reduce subsidies in 2014 and as a result, in combination with falling world oil prices, the subsidies bill for the government fell sharply from 14.2 percent in 2014 to 11.7 percent in 2015, bringing the overall fiscal deficit down from 13 percent of GDP in 2014 to 11.7 percent in 2015.

The main disappointment in 2015 was in the country’s external accounts. The external current account deficit increased from 0.8 percent in 2014 to 3.7 percent of GDP in 2015. Exports stagnated and workers remittances and tourism receipts did not increase sufficiently to cover the trade account deficit of close to $28 billion. Tourism revenues were on track to reach $7.5 billion, but the downing of the Russian airliner in October prompted the UK, Russia and other countries to suspend flights to Egypt. The number of tourists for the year fell by 6 percent to 9.3 million and tourism revenues reached only $6.1 billion. As a point of comparison, in 2010 the number of tourists reached its highest number historically of 14.7 million bringing in tourism revenues close to $12 billion. Foreign direct investment, which is the best indicator of a country’s economic prospects, rose by $2 billion in 2015 above the $4.1 billion figure in the previous year. This was, however, a far cry from the peak of $13.2 billion inflows in 2008.

There was continuous pressure on foreign exchange reserves of the Central Bank of Egypt throughout the year. Simply to maintain the level of international reserves at a little over $16 billion, the government had to attract substantial external financing. Most of this financing came from the Gulf countries that were fulfilling their commitments made in 2013 and 2014, as well as the pledges they had made at the Economic Development Conference in Sharm al-Sheikh in March 2015. Egypt also tapped the international capital markets in mid-2015 and sold $1.5 billion Eurobonds with a 10-year maturity.

All in all, while there were some signs of improvement in 2015, the outcome in general was not something to truly boast about. The country needs to grow by at least 7 percent on a sustained basis to absorb the new entrants into the labor force each year. What then will 2016 look like?

There doesn’t seem to be any particularly persuasive evidence that 2016 will be much better than 2015. While the government is projecting growth of around 5 percent, most other observers, including the World Bank and the International Monetary Fund, expect growth in 2016 to be only 4 percent or less. Evidence that growth is slowing down shows up in the movements of the Egyptian Purchasing Managers Index (PMI), measuring economic activity in a country, which has been falling for the last four months. Unless there is a major improvement in security, both foreign direct investment and tourism, both of which are key to Egypt’s growth, will be fairly sluggish. Unemployment would probably decrease slightly as a result of the megaprojects the government launched in the past year, including the expansion of the Suez Canal, the building of the new administrative capital, the construction and rehabilitation of 3000 km of new roads, the construction of 1 million new housing units, and the reclamation of 1 million acres of land.

The three main problem areas that Egypt faced in 2015 will still be present in 2016. While there has been some progress in reducing energy shortages and Egypt has signed multiple agreements to expand physical capacity, the lack of energy will continue to be a major constraint for industry and new investments. The fiscal deficit will remain in double digits and all signs indicate there will be no further action on subsidies. The country’s dependence on external financing is expected to be fairly large in 2016 and beyond. For this reason, the World Bank has approved a $3 billion loan to be disbursed over the next 3 years, and Saudi Arabia has agreed to invest $8 billion in Egypt on favorable terms to 5 years. Furthermore, in January 2016, Saudi Arabia added another $3 billion in loans and grants support the economy.

Based on all these indicators, 2016 will not be a breakout year for the Egyptian economy and will most likely turn out to be a mirror image of 2015, and quite possibly worse. It will take time for the megaprojects to yield positive results for energy, employment, and overall growth. The only way to get a quick growth spurt is through a fiscal stimulus. But given the state of the public finances, the government does not have the financing to engage in this policy. Therefore, barring any further domestic or external shocks, Egypt will have to focus on reducing the fiscal deficit by increasing tax revenues and reducing subsidies, encouraging foreign direct investment, and implementing the economic reforms to encourage the private sector to expand and invest. President Sisi recognized that it would take a while to transform the economy and warned that “…maybe a generation or two will not reap the benefits (of reform)”. The turnaround observed in 2015 will need to be maintained in 2016 and beyond, and the Egyptian people will have to be patient.