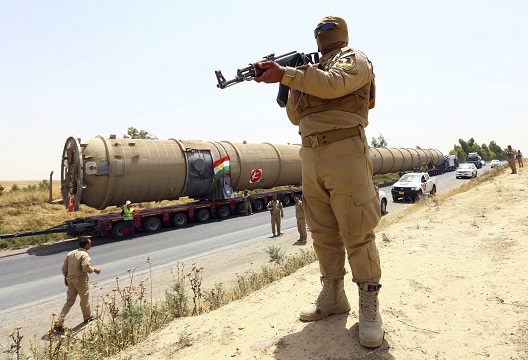 As the jihadists of the Islamic State, formerly known as the Islamic State of Iraq and al-Sham (ISIS), capture more and more territory in Iraq, the question on the minds of observers is what will become of the Iraqi state? The countries in the region and the broader international community have been focusing on the dangers the Islamic State advances pose for security and for political and geopolitical stability. But there will be an economic fallout as well. If the Iraqi economy were to deteriorate significantly, this would add to political instability and greater insecurity in Iraq and its neighbors.

To determine the potential impact of the Islamic State gains and the continuing fighting, one has to understand the basic structure of Iraq’s economy, characterized by two main features:

In sum, the structure of the Iraqi economy is largely unchanged from the end of the US occupation in 2004. The Coalition Provisional Authority (CPA) had a grand vision of Iraq being transformed into a vibrant, diversified, and modern economy led by the private sector, and outlined the economic and institutional reforms that would bring about this outcome. Iraq today still depends almost exclusively on oil and the state still dominates the economy, a picture virtually unchanged from the economy of Saddam Hussein days. The government has not implemented any major economic reforms or developed economic institutions over the past decade to achieve what the CPA envisioned. Undoubtedly, the CPA’s policies to transform Iraq have been an abject failure.

Since Iraq remains a one-product economy, fighting with the Islamic State will affect the economy through disruptions of the oil sector. Were there to be a significant drop in Iraq’s oil production, the effects on the Iraqi economy would be devastating. One could find an analogous example in the case of Libya, where the economy went into a freefall in 2011 as the uprising to overthrow Muammar Qaddafi resulted in a sharp cut in oil production. The drop in oil production from 1.6 mbd in 2010 to less than 0.5 mbd in 2011 led to overall GDP being more than halved (from $75 billion to $35 billion)—a catastrophic collapse of GDP by any standard. Over the past year, as militias fight to achieve their political aims and oil production has fallen dramatically, the Libyan economy is once again experiencing an economic meltdown.

Could the Libya scenario emerge in Iraq? As yet, the Islamic State has not taken control of any significant part of Iraq’s oil facilities. It has captured some small oil fields and Iraq’s largest oil refinery in Baiji, which supplies most of the gasoline and diesel for the northern part of Iraq. More significantly, Kurdish forces now have complete control of the giant Kirkuk oil field. If the Kurds hold on to Kirkuk, Iraq would lose about a quarter of its oil production. In addition, the Kirkuk-Ceyhan pipeline, which has a capacity of 1.6 mbd, has been shut down due to frequent attacks since March this year and exports from the northern oil fields of Iraq have been sharply curtailed.

While serious, Iraq can still manage effects of this loss of oil production. Real GDP, which only recently was expected to grow by 6 percent in 2014, will now likely either remain flat or fall by 2-3 percent. The reason the decline is not larger is that about three-quarters of Iraq’s oil production is in the southern part of the country where most of the Shiite population that support the government live. Foreign oil companies have played a major role in developing and rehabilitating the southern oil fields and most of Iraq’s oil flows through the oil terminals of the port city of Basra on the Gulf. In addition, the government is spending some portion of its $80 billion of international reserves to compensate for the loss of oil export revenues from the northern part of the country.

As long as the ongoing war with Islamic State does not escalate further, and the Kurds stay part of the Iraqi state, the economy will likely be able to cope. In Iraq, like in other Middle East oil producers, as goes oil so goes the economy. The government does not have to do much to keep the economy moving along at a steady, perhaps low, pace as it has a momentum of its own based on oil production and world oil prices. This is the optimistic and relatively benign scenario.

But the potential for a more pessimistic grim scenario cannot be excluded. The country could be divided between the Shiites, Sunnis, and Kurds, with each of these three parties controlling the areas where they maintain a majority. This splitting of the country is unlikely to happen peacefully. The Kurds could declare and independent state, leaving the Iraq government and the Islamic State to battle it out on what parts of the country each would rule over. The resulting full-blown sectarian civil war would be devastating for Iraq. In this scenario, Iraq could wind up looking not like Libya but more like Syria, where the economic costs of civil war are nothing short of staggering.

While the odds still favor a variant of the optimistic scenario, the probability of the pessimistic scenario in some form is not so small that it can be safely ignored. The attention so far has been on security and politics. Ignoring the economics is a mistake. All three aspects have to be considered together. If the Shiite-led government in Iraq is to make peace with the Sunni population, and defeat the Islamic State, it will have to adopt both political and economic inclusiveness. For the past decade, unfortunately, it has done neither.

Image: A member of the Kurdish security forces takes up position with his weapon as he guards a section of an oil refinery, which is being brought on a truck to Kalak refinery in the outskirts of Erbil, in Iraq's Kurdistan region, July 14, 2014. (Photo: Reuters)