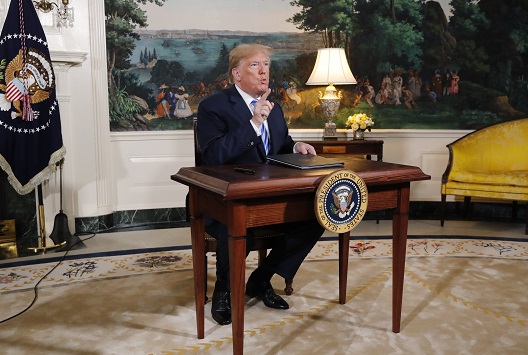 As reported previously by this writer, senior Iranian former officials repeatedly told him and other Americans in unofficial, track II discussions preceding the nuclear deal, that Iran had no intention of weaponizing nuclear energy. The reason offered had nothing to do with Koranic proscriptions. To paraphrase one of the Iranian ex-officials, “Look at all we have been able to accomplish in the region—in Lebanon, Iraq, Syria, and now Yemen—without nuclear weapons. Now imagine us going nuclear and provoking nuclear proliferation everywhere in the neighborhood. Do you think we want a nuclear war crisis every time we dispatch General Soleimani somewhere?” When the ex-official was asked “What then is the purpose of these negotiations?” he quickly replied, “We need relief from sanctions.”

Well, Iran has gotten some relief, and now it stands to lose some of what it has gained. Clearly Tehran has used some of the benefits derived from the JCPOA to finance destabilizing activities throughout the region. Yet those who criticize aspects of the deal—including this writer—must evaluate the negative implications of driving wedges between allies over this issue when a united front is needed to confront Iran on the ground.

Much criticism leveled at President Trump for having taken steps to kill the JCPOA entails the implicit assumption that Iran was hell-bent on nuclear weaponization prior to July 2015, and now the barrier to doing so is being carelessly demolished. If it was indeed determined to go nuclear—and there seems to be evidence that Iran’s weapons program stopped in 2003—then removing restrictions that pushed Tehran’s “breakout” time from two or three months to perhaps a year would seem reckless. If, however, Iran did not intend to build a nuclear arsenal, then the JCPOA has amounted to a blank check for paying Tehran to do what it intended to do anyway, and President Trump would be correct in labeling it “the worst deal ever.”

Notwithstanding what he and others were told by track II interlocutors, this writer is in no position to know whether the JCPOA sidetracked (or derailed) the inevitability of Iranian nuclear weapons. If it did, then President Barack Obama was right to pursue it and implement it as an executive agreement, although his sacrifice of civilian protection for Syrians (to appease Tehran) was entirely gratuitous and catastrophic. If he did not know he was stopping something otherwise inevitable or likely, then the wrong rabbit was pursued down the wrong hole diplomatically. If all Iran wanted was to be paid handsomely for agreeing to do something it already wanted to do, then sanctions relief and cash transfers are simply underwriting Tehran’s program of regional destabilization and hegemony, for nearly nothing in return.

One prays Obama knew—or thought he knew—that absent a JCPOA, Iran would surely be mounting nuclear warheads on ballistic missiles. If he did not know it, or believe it to be probable, then his pocket was picked. What is known for sure is that President Trump and Israeli Prime Minister Benjamin Netanyahu both believe that Tehran hungers to have nukes, JCPOA or no. This being the case, one would have expected more caution in trying to tear down an edifice which, though far from perfect, resulted from a multilateral bargaining effort involving important American allies. Moreover, the official United States position seems to be that Iran has been essentially in compliance with a “worst deal ever,” one that nevertheless moves the breakout period to the left.

The view here is that Iran’s activities in the Levant, Mesopotamia, and the Gulf are entirely destructive and destabilizing. The United States should oppose them, starting in eastern Syria by stabilizing territories liberated from ISIS (ISIL, Daesh, Islamic State). To fight a three-plus year war against the fake “caliph” only to turn liberated areas over to the very parties—Iran and the Assad regime—whose atrocities breathe oxygen into the lungs of Islamist extremists everywhere would be to elevate deliberate, conscious negligence to national security policy.

Yet stabilizing Syria east of the Euphrates River to seal the victory over ISIS and set conditions so extremists of all stripes cannot again take over would be a long and difficult task. Washington will need partners and allies to share the burdens of securing the Euphrates deconfliction line, rebuilding the destroyed city of Raqqa, and enabling competent, legitimate indigenous governing and security forces to take hold. This would be a sustained and heavy lift, not one to be put exclusively or even mainly on the backs of American taxpayers.

Yet given how the administration is handling the JCPOA issue, is the possibility of successful outreach to allies to work together to block Iran in Syria being maximized? This seems not to be an American diplomatic priority. Perhaps the administration has decided to make its attempted destruction of the JCPOA the totality of its anti-Iran pushback.

If the JCPOA is “it,” the victory over ISIS could be forfeited by a rapid American withdrawal from Syria, one that Tehran would applaud. The lessons of Iraq in 2003 and Libya in 2011 will have been ignored, and conditions ripe for the revival of Islamist extremism in eastern Syria will have been reestablished.

But if the administration is interested in blocking Iran on the ground and rallying partners to the task, it may be missing an opportunity by seeming to run roughshod over JCPOA-related allied concerns. American allies are feeling disregarded, disrespected, and bullied by an administration they think is savaging the JCPOA mainly because of Obama fingerprints. American diplomacy would not seem to be setting the conditions for cooperatively beating Iran on the ground, even if one wishes to believe that Iran bamboozled the West or that the deal is substandard in other respects.

If the Trump administration is interested in making life hard for the Iranian Revolutionary Guard Corps and their employees in Syria and Lebanon, it might use the fate of the JCPOA as leverage to build a united front to face the central challenge: Iran’s destabilization of a region important to the national security of the United States and its allies. Keeping in place and working to improve an imperfect and perhaps unnecessary deal might be a small price to pay for a multilateral effort in which burdens and risks are shared equitably. Perhaps it is not too late to do so.

Frederic C. Hof is a nonresident senior fellow at the Rafik Hariri Center for the Middle East.

Image: U.S. President Donald Trump speaks after announcing his intent to withdraw from the JCPOA Iran nuclear agreement in the Diplomatic Room at the White House in Washington, U.S., May 8, 2018. REUTERS/Jonathan Ernst