Lebanon is scheduled to hold a parliamentary election on May 15, which should have been an opportunity for a two-year-old opposition movement to begin unseating a political elite that has dominated the country for the past three decades with disastrous consequences.

However, the dozens of opposition groups—popularly known as the “thawra”—that emerged in the wake of the October 2019 anti-government protests were unable to capitalize upon widespread public anger and frustration with the traditional political class, failing to present a unified and coherent front behind which the electorate can rally. Instead of punishing the current crop of politicians who are largely responsible for what the World Bank has described as one of the top three worst economic crises of the last 150 years, it’s looking increasingly likely that the next parliament will remain relatively unchanged, with Iran-backed Hezbollah and its allies holding a slim majority.

Given Lebanon’s economic collapse, which has led to rampant inflation, and shortages of medicines, fuel, food, and other key commodities, most Lebanese regard the elections with pessimism, suggesting that turnout could be low.

The one party expected to increase its parliamentary presence is the Lebanese Forces headed by Samir Geagea. Its chief rival for the Christian vote, the Free Patriotic Movement (FPM) of Gibran Basil, is predicted to take a serious hit at the polls—reflecting the unpopularity of its leader—to the advantage of the Lebanese Forces and, potentially, the thawra candidates.

The size of Hezbollah’s membership (numbering tens of thousands) all but guarantees that its candidates will win seats in parliament, but the party has quietly signaled unease over possible low voter turnout from its broader Shia support base. Hezbollah hopes for mass participation in the elections, as it needs its supporters in the relevant constituencies to help elect candidates belonging to its struggling ally: the FPM.

It’s unclear if the Amal Movement of Nabih Berri, Lebanon’s veteran parliamentary speaker, will also lose seats at the election. Hezbollah’s disciplined cadres can be expected to dutifully vote, but many Amal supporters may choose to stay home. Popular support for the so-called “Shia duo” of Hezbollah and Amal has been declining for several years, especially since the scale of Lebanon’s economic and financial malaise became known in October 2019, triggering a mass protest movement.

Notions of continued resistance against Israel carry little weight when Shia breadwinners are struggling to feed their families. The crime rate is skyrocketing in the predominantly Shia-populated southern suburbs of Beirut, with armed robberies, shootings, burglaries, and car and motorcycle thefts a daily occurrence. Many residents of the area openly speak to me of their disdain for Hezbollah and Amal and say they won’t vote for either party.

Former Prime Minister Saad Hariri’s January announcement that he is stepping away from politics and that his Future Movement wouldn’t contest the elections has thrown the Sunni community into disarray. Some Future Movement MPs resigned from the party to run as independents. Others have called for a boycott of the election. With Hariri gone and the Future Movement effectively dormant, no other central figure nor party can represent the Sunni community at a national level. Until some new figure emerges—possibly from the ranks of the traditional grand Sunni families—the community will be fragmented and limited to politicians with local purviews scattered across the country. This has granted Hezbollah an opening to snap up some floating Sunni electoral candidates, a move that could offset any losses experienced by its Christian FPM ally at the polls, senior Sunni political sources have admitted to me ruefully.

Perhaps the greatest disappointment for many Lebanese is the failure of the thawra groups to forge a united front ahead of the elections. There were multiple attempts to find common ground, but the sheer number of groups, big and small, and their different priorities complicated the process. While they agree on the somewhat nebulous strategic aim of ending the sclerotic political system and its leadership, the thawra is often at odds on how to achieve this goal and what an alternative system should look like.

For example, some groups seek to address the weighty issue of Hezbollah’s arms as a priority, while others view the subject as too sensitive and prefer to leave it to later. There were also disagreements on whether to oppose or welcome Sami Gemayel of the Kataeb party and former MP Michel Moawad of the Independence Movement, both of whom are drawn from the political establishment but have joined the ranks of the opposition.

Other than rivalries and tactical disagreements, the thawra movement is politically inexperienced, which has made it vulnerable to meddling from a political elite that has adopted measures—sometimes with the complicity of state security agencies—to encourage factionalism, disagreement, and dissent within the opposition ranks.

The election also represents a watershed moment in Lebanon’s faltering attempts to begin a process of economic recovery. In early April, the government of Prime Minister Najib Mikati reached a staff-level agreement with the International Monetary Fund (IMF) to release around $3 billion of financial assistance in return for a flurry of financial and administrative reforms. While $3 billion is a drop in the ocean—given that Lebanon’s financial losses are estimated at $69 billion (and still climbing)—the package should begin a process that will restore confidence and encourage further investments, grants, and loans.

None of these reforms are expected to materialize ahead of the election, and herein lies the problem. If the election is held on time (there is a faint chance that it will be postponed for contrived reasons), tackling the urgently required reforms to gain IMF approval for the broader package deal will have to wait until a new government is formed. The current government will continue to exist after the election but will operate in a limited caretaker capacity and won’t have the power to discuss and approve the reforms.

Given the usual snail-like pace of government creation in Lebanon, it could mean that the pending reforms could languish on the sidelines for months, almost guaranteeing a further deterioration of conditions in Lebanon. The Mikati government alone took thirteen months—August 2020 to September 2021—to be formed due to incessant bickering over who would have control over what portfolio.

Additionally, even if the next government is formed quickly, Lebanon has a poor track record in implementing reforms. In April 2018, Lebanon won pledges amounting to more than $11 billion to improve infrastructure in a fundraising event in Paris on the condition that a raft of reforms would be undertaken. The reforms never materialized and, thus, neither did the urgently needed $11 billion.

The situation is considerably more desperate today, but the fundamental reality is that implementing the reforms required by the IMF could prove existential to the political elite’s hold on power. Since 1992, the cross-sectarian political cartel—many of them militia leaders during the civil war—have plundered the state’s coffers and ushered in self-serving legislation to feed their patronage networks and stay in power. This resulted in years of corruption, mismanagement, and wasted spending, which led to the current economic crisis. Most Lebanese believe that those politicians who created the financial disaster in the first place lack the will and ability to implement sector-wide reforms. Small wonder, perhaps, that the Lebanese are eyeing the looming elections with a mix of apathy and cynicism. 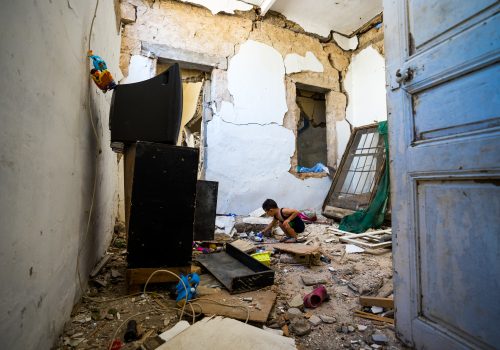 Journalists Zahra Hankir and Lynn Chaya spoke to dozens of survivors about their experiences before, during, and after the August 4 Beirut blast. Here are some of their stories. 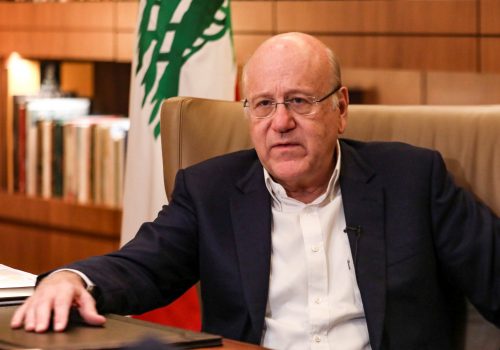 For a government formed less than two months ago after more than a year of bitter political wrangling, it is becoming increasingly doubtful if it will survive long enough to reach the date of parliamentary elections four months away. 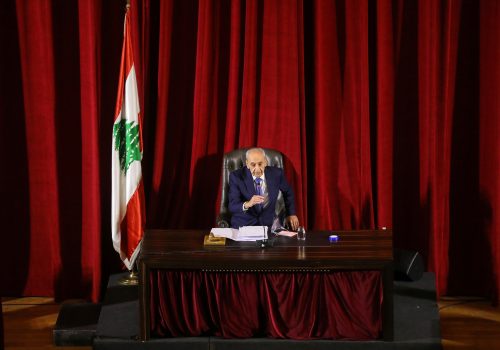 A reform scenario for Lebanon

The Lebanese system is defined in a formal constitutional document and an informal, though equally binding, National Pact. Both will need to be radically altered for genuine reform to take place.

Image: A man sits on a roadside near a torn electoral campaign sign, ahead of the parliamentary election that is scheduled for May 15, in Beirut, Lebanon April 27, 2022. Picture taken April 27, 2022. REUTERS/Mohamed Azakir