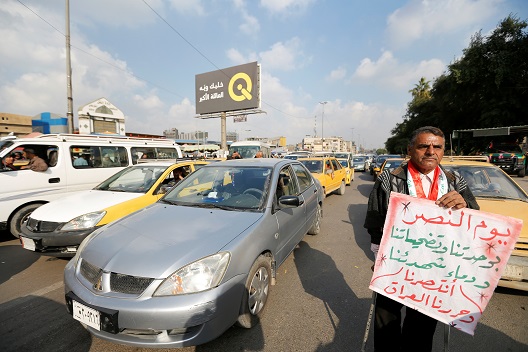 On December 10, 2017, former Iraqi Prime Minister Haider al-Abadi declared victory in the battle to liberate Iraqi territories from the self-proclaimed Islamic State of Iraq and al-Sham (ISIS). The Iraqi Army, Special Forces, and Federal Police, supported by the Popular Mobilization Forces (PMFs) and the Peshmerga, fought for every inch of territory that was occupied by the terrorist group. Iraq was not alone in this fight. An international coalition, led by the United States, offered significant military help in the form of air support, logistics, and invaluable advisory assistance on the ground.

During the three-year battle, the Iraqi armed forces were not only fighting to reclaim lost territory and restore security; rather, they were battling for the very existence of the country. Many observers and analysts went on record predicting the end of Iraq as a nation-state while others went as far as declaring the end of the Sykes-Picot border between Iraq and Syria. Iraqi soldiers were also fighting to restore their self-confidence and the trust of the nation, which they lost after the catastrophic defeat on June 10, 2014 that left ISIS in control of more than one-third of Iraq’s territory. Still, in the end Iraq proved its resilience, restored its complete sovereignty, and bolstered its national unity.

In the post-ISIS era, Iraq worked to strengthen its defense capabilities, improve security by significant measures—November 2018 witnessed the lowest violent death toll in six years—and held two elections: May 12, 2018 national elections and the September 30, 2018 Kurdistan Regional Government (KRG) elections. Despite disputes over the election results, the Iraqi Parliament convened on September 3, 2018 and held several votes to appoint a new Iraqi president, a new prime minister, and fourteen ministers within the constitutional deadlines. The post-2003 peaceful transition of power took place for the fourth time in a country that was known for violent coups d’état.

The Road Ahead for Iraq

Despite all these positive developments, Iraq still has a lot of short-term work to do to set the stage for the fulfilment of strategic long-term objectives such as effective governance and service provision. The victory over ISIS was not cost-free. Thousands of young Iraqis lost their lives in battle, billions of dollars were spent on military equipment, and billions of dollars will go to reconstruction cost, not to mention the irreparable damage to Iraq’s cultural heritage and the long-term impairment of social norms. Over two million Iraqis are still internally displaced (IDPs) or refugees abroad. The return of IDPs will require massive efforts to rebuild their towns, restore security and services, and provide their communities with economic viability. All of this requires significant funds, time, and government capacity. Prime Minister Adil Abdul Mahdi is still struggling to finalize his cabinet as he faces a parliamentary stalemate over the highly coveted security ministries—the Ministry of Defense and the Ministry of Interior. The failure to agree on candidates for these two ministries has held up the confirmation of six other ministers whose candidacy and qualifications are not in dispute.

On the governance front, Prime Minister Abdul Mahdi’s government needs to pursue an aggressive agenda to meet the post-ISIS challenges of reconstruction, reconciliation, and reducing the epidemic of corruption to manageable levels. The Iraqi economy needs immediate attention to get on the right track toward diversified revenues and the creation of employment opportunities. Iraq’s relatively large oil exports are not enough to meet its economic needs, and the fluctuation of oil prices keeps the country in a constant predicament. The coming years require creative planning to create a vibrant private sector to increase national productivity and curb the oversaturation of Iraq’s public sector. This effort will require many supporting steps from the creation of a functional banking system to business and investment-friendly laws and a myriad of infrastructure projects.

Another chronic challenge is the problem of electricity. Despite large expenditures in past years and a multitude of projects, Iraq’s electricity supply remains inadequate for meeting the basic needs of consumers and is unable to support productive industrial projects. The new government has only a few months before boiling summer temperatures inflame popular resentment over power cuts. Success on this front will earn the government a great deal of goodwill that can overshadow other shortcomings and buy the government time. However, the current budget of Iraq’s Ministry of Electricity will only fund operations at the current performance level. To meet the actual needs of electricity generation and distribution, the budget needs to be increased significantly.

Overall, Iraq’s trajectory is positive: it is taking steps towards democratizing and, considering the tremendous external factors that interfered with this process, we can be very optimistic that Iraqis are determined to continue until they reach the finish line. The outcome of various state actors’ invasion of Iraq in 2003—and its subsequent regime change—came at a great cost. The international community, and especially these state actors, need to continue to support Iraq’s nascent democracy.

Image: Photo: Iraqis with security forces stop during a minute of silence, marking the one year anniversary of the military defeat of Islamic State, at Tahrir square in Baghdad, Iraq December 10, 2018. REUTERS/Thaier al-Sudani