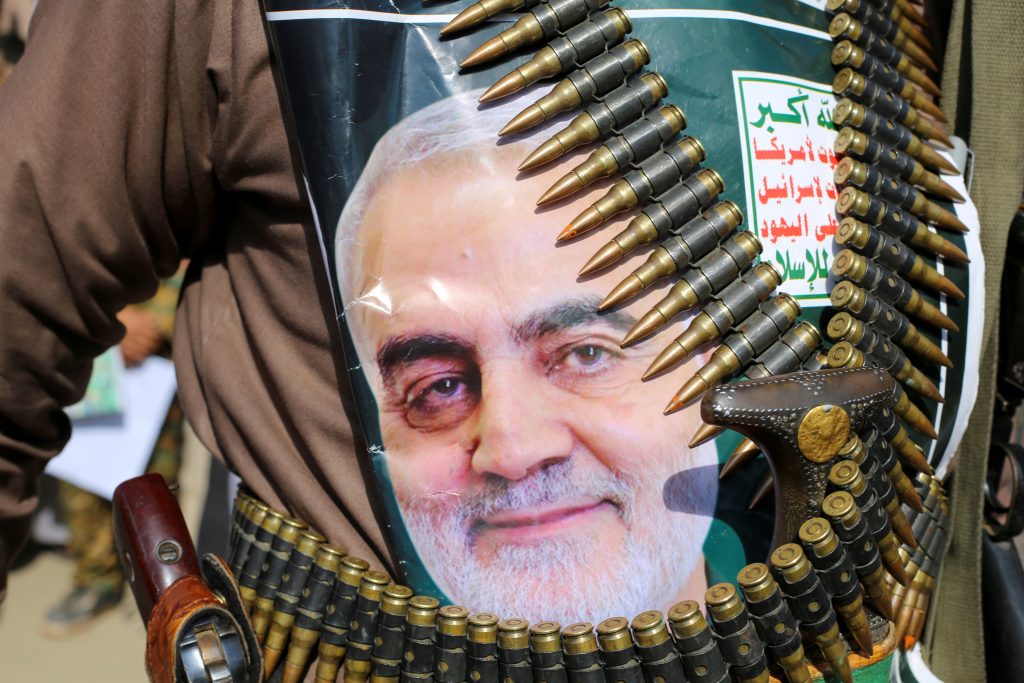 A supporter of the Houthis has a poster attached to his waist of Iranian Major-General Qassem Soleimani, head of the elite Quds Force, who was killed in an air strike at Baghdad airport, during a rally to denounce the U.S. killing, in Saada, Yemen January 6, 2020. The writing on the poster reads: "God is the Greatest, Death to America, Death to Israel, Curse on the Jews, Victory to Islam." REUTERS/Naif Rahma

How the killing of Iranian Major General Qasem Soleimani will ultimately play out geopolitically remains to be seen. Ideally, the decision to eliminate Soleimani was embedded in a carefully constructed strategy; one aimed at achieving a tightly defined overarching objective, one supported by identified resources (including allied support) deemed essential for mission accomplishment, and one fully cognizant of potential ramifications, including unintended consequences. Indeed, to proceed without this kind of careful deliberation would have been an act of breathtaking negligence. Provided sobriety and deliberation guide Washington’s policy, the death of Soleimani can contribute mightily to American-Iranian escalatory parity and form the foundation for an eventual resumption of bilateral or multilateral negotiations.

This writer has believed for decades that the Islamic Republic, as incredible as it may seem, thinks and acts as if it possesses escalatory dominance over the United States. This Iranian belief is dangerously destabilizing, no matter how often it seemed to work for Tehran. It goes back to the 1979 embassy hostage crisis, to the disastrous 1980 rescue mission, and especially to 1983, when Iran orchestrated the deadly bombings of the American Embassy in Beirut and the headquarters of the US Marine Corps element of the multinational peacekeeping force housed adjacent to Beirut’s airport.

The US Department of Defense commission investigating the Marine bombing concluded that Iran—with Syrian support—orchestrated the attack. This act of unconventional warfare—using a single individual driving an explosives-laden flatbed truck (as opposed to an air or artillery assault)—was the Levantine equivalent of Pearl Harbor. No doubt Tehran thought it had covered its tracks, and no doubt it was pleased when the commission (on which this writer served) erroneously labeled this state-on-state warfare an act of terrorism perpetrated by a shadowy Lebanese organization. No doubt Tehran was relieved (as was Damascus) when the United States chose not to respond militarily to its blatant aggression.

Indeed, emboldened by its sense of escalatory dominance, Tehran doubled-down by encouraging its Lebanese proxies to take American hostages in Lebanon. And again, its murderous activities proved consequence-free. Indeed, the Reagan administration sought out Islamic Republic “moderates” to whom it could sell arms to help finance insurgency in Nicaragua and purchase the release of hostages. In those days Democrats were quick to point out the lunacy of labeling anyone affiliated with a violently kleptocratic regime “moderate.” But, times have changed.

The point is that the Islamic Republic was conditioned early on to believe that the world’s only superpower was spineless and stupid. This was dangerous. A major confrontation was narrowly averted in the late 1980s when the United States re-flagged oil tankers in the Persian-Arabian Gulf. The liberation of Kuwait in 1991 also got the attention of Tehran. But Iran’s sense of escalatory dominance was restored over time.

In November 1995, the Lebanese arm of the Islamic Republic, Hezbollah, killed nineteen people by bombing a building in Saudi Arabia housing United States Air Force personnel. A lengthy investigation established Iranian culpability. US President Bill Clinton reached out futilely to the Iranian “moderate” du jour—Iranian President Khatami—to ask that the perpetrators be brought to justice. Iran’s sense of impunity was strengthened immeasurably by its perception of American weakness and the spectacle of Washington believing that accountability could be obtained from the perpetrators themselves.

Initially cowed by the 2003 American invasion of Iraq, Iran regained its nerve when it realized Washington had no plan for post-combat stabilization. Over 600 American service people were killed in a Shia militia campaign orchestrated by the late Soleimani. Although it was fully understandable that US President George W. Bush had no desire to widen an already catastrophic conflict, Tehran’s sense that it could do as it pleased to Americans without consequence was inevitably strengthened.

The administration of US President Barack Obama seemed to go out of its way to strengthen Iran’s sense of escalatory dominance. Tehran was pleased (though probably not surprised) to discover that the August 2011 Obama call on Iranian client Bashar al-Assad to step aside as Syria’s president had no operational content. The late Soleimani oversaw the introduction of Hezbollah into the conflict, organized the establishment of foreign fighter and Syrian militias to support the scorched earth survival campaign of Iran’s Syria client, and reacted with delight when the chemical weapons “red line” warning of the American president proved to be a bluff.

The reported letter of Obama to Iran’s Supreme Leader in the fall of 2014 promising that the war on ISIS (ISIL, Daesh, Islamic State) would not touch Assad no doubt struck Tehran as consistent with the long-term American policy of preemptively ceding escalatory dominance. When Soleimani went to Moscow in the summer of 2015 to urge Russian military intervention in Syria, both he and Russian President Vladimir Putin felt confident that passivity would prevail in Washington.

The conclusion of a multilateral nuclear agreement in July 2015 promised to unblock funds and unlock economic sanctions for an Iran still fully employed attacking American interests in the Middle East. The belief here is that Tehran succeeded in getting paid to avoid doing something it was reluctant to do in any event for fear of sparking regional nuclear proliferation that might complicate or even cripple its Soleimani-led campaigns to dominate the Arab Levant and Mesopotamia.

The Trump administration withdrew from the nuclear agreement, implemented a “maximum pressure” economic sanctions program, but initially continued longstanding American policy vis-à-vis military confrontation with Iran. Failure to respond militarily to drone shootdowns and an attack on a Saudi oil facility convinced Iran that business-as-usual was in play and that American troops in Iraq (now suppressing ISIS) were once again fair game. Yet, as Qasem Soleimani would discover in an intensely personal way, business-as-usual had ended.

Yet, as Qasem Soleimani would discover in an intensely personal way, business-as-usual had ended.

The killing of Soleimani may, as its defenders claim, lead over time to modifications in Iranian behavior that can stabilize current tensions and produce decent diplomatic outcomes. To believe, however, that it will do so on its own without a broader diplomatic context is to engage in magical thinking.

Soleimani’s death may, as critics of the operation claim, produce geopolitical setbacks for the United States in Iraq and beyond. Indeed, far too much of the critical commentary seems to root for a home team defeat in the hope of humiliating the incumbent American president. It is precisely this sort of attitude that will, if adopted by the Democratic Party, contribute significantly to Mr. Trump’s reelection.

Even defenders of and apologists for the Islamic Republic must recognize that Tehran’s sense of escalatory dominance and impunity—long in the making and perhaps only temporarily arrested by the killing of Soleimani—is dangerously destabilizing. One is free to blame America for everything negative that has transpired between Tehran and Washington since 1979 and still counsel caution to one’s Iranian friends. As infuriating as it may be to President Donald Trump’s detractors, the killing of Qasem Soleimani may turn out to be the one act that, if followed-up properly, erased America’s image of craven weakness in Tehran and halted the slide toward war encouraged by that image. Iran, of course, has a “vote” in this matter. Yet so does an American president whose public statements should be moored to his administration’s foreign policy and whose private deliberations should encourage input from Congress, experts, and even critics.

This is not a call for American military recklessness rooted in a new-found sense of escalatory dominance over Iran. A rough parity between the parties, one in which both sides recognize the dangers of armed escalation, could more than suffice to prevent war and keep alive the prospects for negotiated understandings and settlements.

For the better part of forty years, American action and inaction have persuaded the Islamic Republic that it could act with impunity; that the United States feared the escalatory implications of push-back. That dangerous, destabilizing belief seems to have been suspended with the killing of Soleimani. It must never be permitted to arise again if war between the United States and Iran is to be avoided.

Ambassador Frederic C. Hof is Bard College’s Diplomat in Residence and a Distinguished Senior Fellow at the Atlantic Council.

China’s response to the Soleimani killing

Anything that affects the Gulf states’ ability to get energy to market hurts China’s economy, which in turn erodes the performance legitimacy model of the Chinese Communist Party.