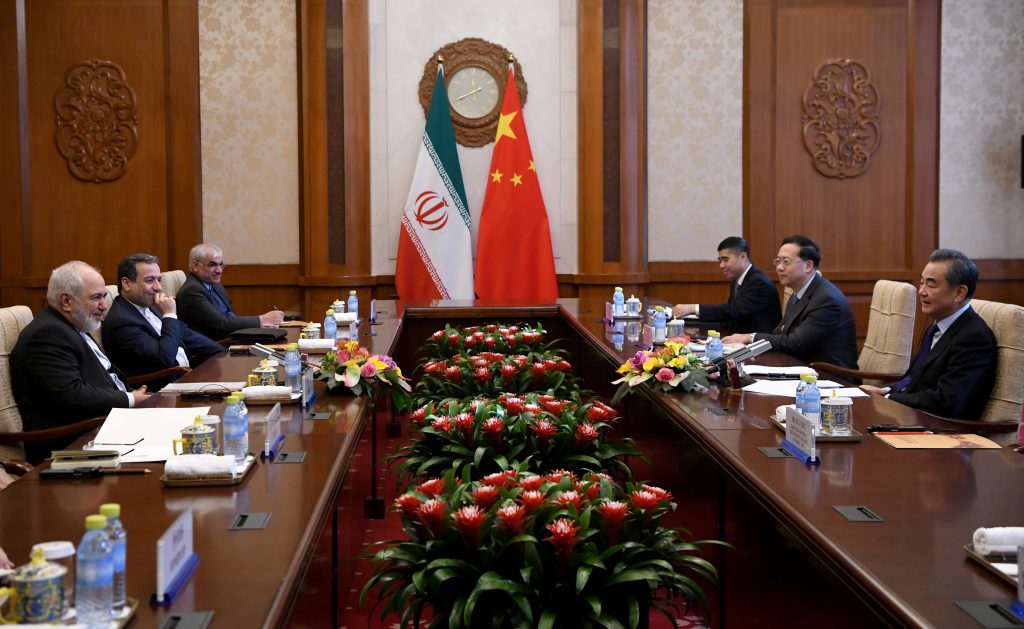 The US assassination of Qasem Soleimani, leader of the Quds force of Iran’s Islamic Revolutionary Guard Corps, is going to have ongoing consequences throughout the Middle East and beyond. Given China’s increasingly deep footprint in the Gulf, Beijing’s response is an important consideration.

The China-Iran relationship has drawn a lot of attention recently. Iranian Foreign Minister Mohammad Javad Zarif visited Beijing four times in 2019 and was in town again on December 31 following a short trip to Moscow. Both meetings took place in the wake of a trilateral China-Russia-Iran naval drill featuring exercises in the Gulf of Oman and the northern Indian Ocean. Zarif’s meeting with China’s Foreign Minister Wang Yi focused on the war games and provided an opportunity to brief him on the Iranian nuclear issue. Perhaps as a reflection of the poor state of China-US relations, Wang was uncharacteristically blunt, saying China will stand with Iran “against unilateralism and bullying,” and claiming, “the unilateral withdrawal by the US from the Joint Comprehensive Plan of Action, giving up on its international commitments and [attempts] to exert maximum pressure on Iran are the sources of the current tension arising over the Iranian nuclear issue.”

That Soleimani was killed three days later only reinforces Chinese concerns of US policy in the Middle East. The Foreign Ministry spokesperson initially offered the normal calls for restraint, but with an edge, singling out the United States, and expressing hope that all parties follow the “basic norms of international relations.” In case that wasn’t clear, Wang made it more explicit in a call to Zarif, complaining that the “dangerous US military operation violates the basic norms of international relations and will aggravate regional tensions and turbulence.”

This emphasis on norms is an important one. Chinese leaders are consistent in their opposition to the use of force in international politics, stating a preference for development-based solutions to political and security problems. Chinese officials frequently make this point addressing concerns in the Middle East, such as when Li Chengwen, China’s Ambassador to the China-Arab States Cooperation Forum, said “The root problems in the Middle East lie in development and the only solution is also development.” Given this orientation it is not surprising that they would take issue with what appears to be a reckless and impulsive political killing. Regardless of the rationale, Soleimani’s death will contribute to a more uncertain environment in the short term.

For Beijing this uncertainty is troubling because it considers Gulf stability important. Energy is obviously a significant consideration. China is the world’s largest importer of oil and gas and Gulf states are major suppliers for China. Anything that affects the Gulf states’ ability to get energy to market hurts China’s economy, which in turn erodes the performance legitimacy model of the Chinese Communist Party. Beyond energy, China has massive investments in the Middle East, with over $123 billion worth of investments and construction contracts since 2013. It has a large expatriate population in the United Arab Emirates, further increasing the costs of a potential conflict.

Beijing’s interests therefore lie in a stable Middle East, and it has long been assumed that this would eventually require some kind of Chinese security role. However, a long list of Trump administration decisions in the Middle East have made for a more combustible region, which in turn seems to be speeding up the process of China’s regional military involvement.

The four-day joint naval exercise between China, Russia, and Iran was the first time the three states cooperated in this type of event; at different points all three had engaged in bilateral exercises with each other, but never trilateral. It was announced in September, shortly after the drone strikes on Saudi Aramco’s facilities in Abqaiq and Khurais. Given the heightened tensions in the Gulf at the time, it is curious that China agreed to participate.

Li Jie, a Chinese naval expert, acknowledged this, saying, “The timing of the joint exercise might be a bit sensitive and some might take it as a show of China’s support for Iran should there be any military conflicts between countries. But it might well be a regular military exchange between the countries if it is held in international waters and without targeting another country.” It could also be linked to Iran’s September announcement of its Coalition of HOPE plan for maintaining regional freedom of navigation and energy security. Both Russia and China endorsed the plan, but no other power, regional or otherwise, has.

Described by Zarif as a reflection of a shared “commitment to secure vital waterways,” the trilateral exercises included drills to combat piracy and terrorism as well as rescue operations. Iran has made a lot of noise about the exercises, referring to “the new triangle of power on the sea” that will may have a serious international impact. Chinese officials were far less grandiose, describing it as “normal military cooperation.”

This should not be mistaken for deflection on Beijing’s part; the China-Iran relationship is the very definition of asymmetry. Iranian leaders often hype the comprehensive strategic partnership as a sign of China’s commitment to Iran, neglecting to acknowledge that China has many such partnership agreements, including with Saudi Arabia and the United Arab Emirates. China does not privilege relations with Tehran over its Gulf rivals. In fact, in economic terms the Gulf Cooperation Council is a far more attractive set of partners than a revisionist Iran, and certainly have more to offer its intra-regional connectivity plans with the Belt and Road Initiative. In short, Iran needs China much, much more than China needs Iran.

It is also important to point out that the joint naval exercises with Iran were not especially novel. China and Saudi Arabia held three-week naval exercises just the month before. Blue Sword 2019 between the Saudi Royal Navy and the Chinese PLA Navy focused on “building mutual trust, enhancing cooperation, exchanging experiences, developing the capacity of participants to combat maritime terrorism and piracy, and improving training and combat readiness.” And that was not the first time China and Saudi participated in joint military exercises, having conducted war games in China in 2016.

The Saudi and Iranian exercises being held so close together was not a scheduling mishap. They are a signal that China will continue its balanced approach to the region—also evident in Xi Jinping’s back-to-back state visits to Riyadh and Tehran in January 2016 when he signed the comprehensive strategic partnership agreements with both states. China is not a revisionist state. It does not want to reshape the Middle East and take over the responsibility of securing it. It wants a predictable, stable region—as much as that is possible—in which it can trade and invest. In killing Soleimani Trump has made that more challenging. In the short term that will increase the cost of doing business and most likely put a lot of people at risk. In the long term, however, it may increase China’s power and influence in the Middle East as it assumes a larger responsibility for securing its regional interests.

The Soleimani assassination: A view from Britain

While UK political commentators were phrasing Britain’s low-key response to the assassination as even-handedness, the actual response on the ground is likely to be anything but.