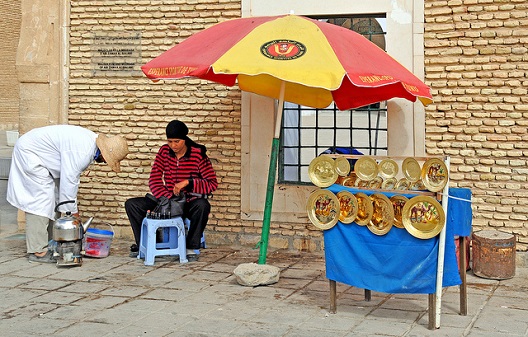 The uprisings that swept the Arab world began with the overthrow of President Ben Ali of Tunisia in January 2011. Egypt, Libya, Syria, and Yemen quickly emulated Tunisia’s example, giving hope to those countries’ citizens that major transformations were underway to meet their political and economic aspirations. Unfortunately, three years on, Tunisia is now the sole remaining country on course to realize these hopes as the other countries fall by the wayside, their transitions stalled for one reason or another.

In a recent speech in Washington, President Moncef Marzouki claimed that Tunisia was the only hope for democracy in the Arab world and that its success or failure would determine the future of democratic transitions in the region. Undoubtedly, Tunisia has made major advances on the political front. After a drawn out national dialogue involving the major political parties, the National Constituent Assembly adopted a new constitution in January 2014 and has set parliamentary elections for October 2014, with presidential elections to follow soon thereafter.

Tunisia’s five successive transitional governments since 2011 focused most of their attention on the political transition and security. President Marzouki publically stated that political change and security were the two main priorities of the current government. The economy mattered, but it remains a secondary priority, despite economic factors playing as important a role as political grievances in triggering the uprising. This lack of attention resulted in a floundering economy for the past three years with grim near-term prospects. Indeed, Tunisian politicians have not yet fully internalized the significant impact of economic developments on its still nascent transition. If the economy continues to limp along and economic grievances remain unaddressed, the potential political upheaval would undoubtedly result in a further deterioration in security.

Under the Ben Ali regime, Tunisia achieved emerging market status and appeared well on the way to joining the ranks of lower-income European countries. Economic growth over the 2000-2010 decade, while not spectacular, averaged a solid 4.5 percent per year. During the decade, inflation averaged a little over 3 percent and the country maintained a fiscal deficit below 3 percent. With tourism booming, large-scale workers remittances, and a substantial foreign direct investment (FDI) coming in, Tunisia was able to build up its international reserves to nearly $10 billion by 2010.

The relatively good macroeconomic performance, however, masked the growing structural fault lines in the economy that were exposed by the uprising, including:

Then came the uprising and the macroeconomic picture deteriorated sharply. The economy went into recession, with real GDP falling by nearly 2 percent in 2011. The unemployment rate rose to 19 percent and youth unemployment reached a staggering 42 percent. Due to the political instability and deteriorating security, tourism and FDI—the mainstays of Tunisia’s balance of payments—declined significantly. The ongoing European economic crisis also negatively affected Tunisia’s exports. As a result, the current account deficit widened from 5 percent of GDP in 2010 to 7.5 percent, and international reserves fell by $2 billion that year. The fiscal deficit jumped from less than 1 percent to 3.5 percent in 2011 as the government engaged in fiscal populism—increasing wages, public employment, and food and energy subsidies—to quell the immediate demands of the population.

In the following two years, the economy started to show signs of improvement. Real GDP grew at a modest 3 percent and unemployment declined somewhat to 17 percent. The government contained the loss of international reserves by attracting substantial external financing. In June 2013, Tunisia and the International Monetary Fund (IMF) agreed to a two-year Stand-By Arrangement (SBA) amounting to $1.74 billion. This program is currently on track and the fourth review is expected to be completed by late August this year, giving Tunisia a further $220 million.

In addition to IMF financing, Tunisia will receive $1.2 billion support from the World Bank in 2014. The country also tapped international capital markets successfully. In 2012, it floated $485 million in Eurobonds using the US loan guarantee. In 2013, it issued a $400 million Samurai bond and a $625 million sukuk. It intends to issue another $580 million sukuk this year and a Eurobond using the second US loan guarantee of $500 million, agreed to in June 2014.

With the IMF program, Tunisia partially succeeded in turning around the macroeconomic indicators. The government, however, has primarily focused on containing the fiscal deficit through efforts to tackle subsidies, allowing more flexibility in the exchange rate, and generating external financing to build up international reserves. Unfortunately, Tunisia has made no real progress on economic reforms that could sustain high rates of growth (approximately 7-8 percent per year) necessary to create jobs and make a significant dent in unemployment. While macroeconomic stability is a necessary condition for higher growth, it is not sufficient. To ensure higher, more inclusive growth and reduce income and regional inequalities, a range of structural economic reforms are required, which transitional governments have been unwilling or unable to implement.

What reforms are needed to get out of the low-growth, high-unemployment trap in which Tunisia finds itself?

Successive Tunisian governments recognized the need for such reforms, and the international community has pressed Tunisia to implement them. Yet, the five transitional governments have done little. The ostensible reason has been that deep economic reforms should be undertaken by an elected government. This is a myopic view. It assumes that a future elected government will be able to garner political support for these reforms. By not moving on the reform front means this government will leave the next government in 2015 an economy that has been in the doldrums for four years and in need of major transformation.

One could understand President Marzouki and Prime Minister Jomaa’s position that they do not have the mandate to push through difficult economic reforms. Nevertheless, the current government could greatly assist the future elected government by outlining the needed economic reforms made and the guidelines for their implementation. These types of reforms have been studied and analyzed at great length and introduced in many countries around the world. With technical assistance from the United States, the EU, IMF, and the World Bank, the Jomaa government could leave its successor a detailed blueprint of reforms, thereby avoiding the delays typically associated with a new government finding its bearings.

What could the international community do to incentivize the future Tunisian government to undertake major structural reforms? Certainly, some could provide external financing that would reduce the costs of adjustment resulting from the reforms. However, budget constraints would likely preclude any large-scale financing from the United States. Trade agreements that would require Tunisia to continue with reforms could also be an incentive mechanism. The Tunisian government has supported this idea and the business community would no doubt welcome trade deals with the EU and the United States committing the country to market-oriented reforms. Negotiations with the EU for a Deep and Comprehensive Free Trade Agreement (DCFTA) continue. The Tunisians are eager to have a Free Trade Agreement (FTA) with the United States, but to date the US has been reluctant to proceed even with the 2002 Trade and Investment Framework Agreement (TIFA). Some variant of an FTA or other trade inducements, however, could encourage reformers and businesses.

Tunisia is the poster child for the Arab Spring and its success or failure will have consequences for political and economic inclusiveness in other Arab countries. Political changes have taken center stage since the beginning of 2011 and the economy has largely been of secondary importance. This has been a mistake, and time is running short to rectify the balance. Tunisia is the last remaining chance for a successful democratic and economic transition. If it fails, the next Arab Spring will be a long time coming. Neglecting the economy surely increases the odds of that happening. Those touting Tunisia as a political success story should hedge their bets. If the economy does not improve dramatically—and soon—the transition could still unravel.

Image: A vendor selling goods next to the Mausoleum of Sidi Sahabi, May 2012, Kairouan, Tunsia. (Photo: Flickr/Dennis Jarvis)