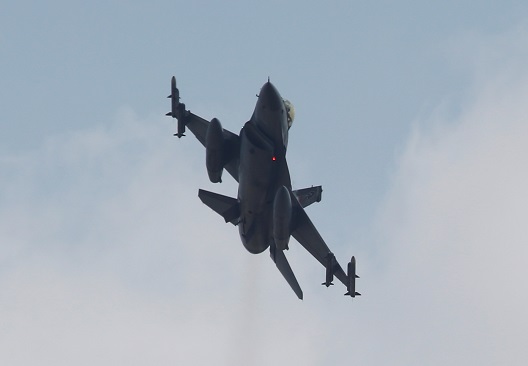 The failed coup-attempt on July 15, 2016 upended the Turkish Air Force and prompted the ruling Justice and Development Party (AKP) to purge pilots and air crews from the military. The Air Force played a central part in the failed coup attempt. Although only some two-dozen F-16 pilots took part in the coup in eleven aircraft, alongside tanker and transportation aircraft that refueled rogue fighter jets and moved troops around the country, the repercussions were dramatic and widespread for Turkey’s entire F-16 fleet.

In the days after the coup attempt, the Turkish Air Force purged more than 300 F-16 pilots, most of which had years of experience. The result: The cockpit to pilot ratio dropped from over 1.25 pilots per one aircraft to 0.8. This ratio is important to ensure that pilots get enough rest between flights without impacting the Air Force’s operational tempo. The Turkish F-16 fleet is primarily used to strike pre-determined targets clustered in the mountains north of Duhok in Iraqi Kurdistan. The F-16 also performed the close air support mission for Turkish forces operating as part of Operation Euphrates Shield and in Turkey’s Kurdish-majority southeast.

With such a small number of fighter pilots, Turkey now has both a “production” and “absorption” problem. Production refers to internal capacity to train new pilots and then assign them to operational units, while absorption refers to the assignment of new pilots to operation units to gain enough flight hours to be considered experienced. Although Turkey has a sufficient number of aircraft, absorption requires that inexperienced pilots be paired with an experienced pilot, so that the latter gain enough flying hours to upgrade from a wingman to a flight lead. Turkey does not have enough instructors and experienced pilots, both of which are necessary for recently graduated F-16 pilots to gain the requisite number of flight hours in operational units they are assigned to.

Turkey has approached a handful of its NATO allies for assistance, both to address the challenges the instructor shortage poses and to deal with the longer-term problems sustained pilot shortages pose for a modern Air Force. The United States and many of its NATO allies have grappled with this challenge for nearly two decades, after the reductions in military spending following the end of the Cold War in 1991. The United States, for example, has sought to adopt policies to address its own pilot shortages for well over a decade, albeit with mixed results.

The NATO-wide shortage of fighter pilots restrict the ways in which the alliance can provide assistance to Turkey. Since the failed coup, the Turkish Air Force has requested more assistance from the United States. Ankara initially asked for the US instructors to travel to Turkey, where they would most probably help with basic flight school and, then, to fly in operational units. The US, however, does not have any excess F-16 instructor pilots to send to Turkey. Recently, the US F-16 pilot shortage prompted the Air Force to shutter a healthy training unit in order to send the instructors to four under-resourced operational squadrons to help deal with US Air Force’s absorption problem, according to an interview with a military official. The US Air Force is also beginning to send newly winged pilots to the Marine F-35B and Navy EA-18G aircraft to help with absorption challenges. The other NATO F-16 users face similar challenges and, like Turkey, send pilots to the United States for basic flight training.

The Turkish press has interpreted the American refusal to send pilots to Turkey as a “political slap in the face,” when the reality is that the United States simply does not have anyone to send. In fact, the United States has worked with Ankara to increase the number of slots for the number of Turkish pilots that will be sent to the United States for basic training, despite an over-all reduction in international student pilot slots. This year, some 15 students will come to the United States. In Turkey, the Air Force Academy now has four classes underway and training flights have begun again at Cigli Air Force Base. The return to normal operations at the base was politically contentious, given that the Special Forces team tasked with killing President Erdogan on 15 July flew from the base to a hotel in Marmaris, where Erdogan and his family were staying on holiday. It will take four years for these new pilots to graduate, before they are assigned to an operational unit, where the instructor shortage suggests that it will then take some 15 months for the pilots to be fully certified. Following this, they then need upwards of three years to fly with experienced pilots in operational units before they are finally “absorbed” and become experienced pilots.

To address its instructor shortage, Turkey also sought assistance from the Pakistani Air Force to help address the production and absorption problem. The Pakistani Air Force flies the same Block F-16 as their counterpart’s in Turkey. However, Turkey’s options with Pakistan are limited by US International Traffic in Arms Regulations (ITAR), the regulatory regime that governs the US defense exports. In this case, Pakistani training would constitute a re-export of technical data, and thus is subject to US export control restrictions. The Pakistani Air Force is, however, reportedly assisting with training on single engine aircraft, the first in a three step training program for F-16 pilots. In 2016, Pakistani trainers were at Cigli Air Force Base, perhaps as part of the Turkish government’s purchase of 52 Pakistani Super Mushshak training aircraft.

The Turkish military has also sought to offer incentives to pilots that retired before the failed coup attempt to return to the Air Force. The voluntary efforts, however, failed to attract a significant number of pilots. More recently, the Turkish government has issued a decree that threatens 330 former pilots with the revocation of their civil pilot license, unless they return to Air Force duty for four years. These pilots also have the option to seek employment outside of Turkey with foreign airlines, but the decree mandates that they report within 15 days of begin summoned—a timeline that seems designed to prevent pilots from actually being able to find alternative employment.

The intent of the decree appears linked to the absorption issue, and thus these pilots should be expected to be placed in operational units. This would allow for these recently returned experienced pilots to fly with lesser experienced pilots to prevent the “broken unit” problem. It is unclear how the decision to compel a return to service will impact unit morale, a second order effect that could hinder training and pose a different set of challenges for the Turkish Air Force. The Turkish military has also consulted with allied air forces about the use of private contractors to provide a similar service, but appears hesitant to adopt the practice, according to multiple author interviews with officials involved with the issue. The idea of using private companies to assist with training is anathema, it appears, to the culture within the Turkish Air Force.

The post-failed coup pilot purge has led to considerable, long-term challenges for the Turkish Air Force. The current pilot-to-cockpit ratio has exhausted Turkish pilots and taxed air crews responsible for keeping the jets in service. The Turkish Air Force has adopted forced conscription to try and grapple with the issue, a practice that has no equivalent in the United States.

The longer-term problems the Turkish Air Force faces are easy to diagnose, but difficult to treat. The production and absorption problems will not be easily remedied and, after a year of trying to entice pilots to return to service, the Air Force has resorted to rather unorthodox measures to account for its current weakness. Unfortunately, the US has a pilot crisis of its own, and is unable to assist in a meaningful manner. The same is true of other NATO countries. The only certainty is that Turkey’s problem will not be solved in the near-term and Ankara will continue to grapple with the challenges of the mass purge more than 50 percent of its F-16 fighter pilots.