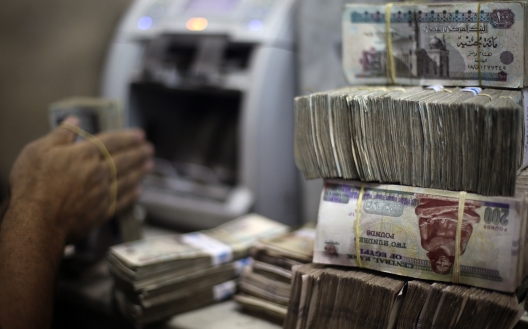 Recent movements in the exchange rate have generated considerable commentary and speculation in the media  and the public about what’s going on with the Egyptian pound and where it is headed. Historically, Egyptian policymakers, and in particular the Central Bank of Egypt (CBE), have placed a high premium on the stability of the values of the pound with respect to the US dollar. While the exchange rate system in Egypt is formally defined by the International Monetary Fund (IMF) as “managed floating,” there is no doubt that it is much more managed than floating.

For many years, the exchange rate was kept in a tight range of 5-6 pounds to the US dollar; this policy in fact persisted through the first couple of years following the uprising of January 2011. In mid-2013, in the wake of widespread protests against former President Mohamed Morsi, the currency weakened by about 9 percent, the largest fall in ten years. However, with the election of President Abdel Fattah al-Sisi in 2014, the CBE once again reverted to its previous policy of stability at all costs and used a mix of foreign exchange intervention and interest rate policy to keep a tight control on movements in the pound.

This obsession with stability has come at a significant cost. Take the period from the fall of Hosni Mubarak in February 2011 to the election of Mohamed Morsi in June 2012. The cost of keeping the pound stable resulted in a loss of international reserves of over $20 billion. Over those 18 months, the pound depreciated by only 3.5 percent with respect to the US dollar, while the country lost some 60 percent of its international reserves. Indeed, had it not been for the financing provided by Qatar to the Morsi government, and the $12 billion assistance from Kuwait, Saudi Arabia, and the UAE that came in 2014, Egypt by now would have completely run out of foreign exchange reserves.

There has been a fundamental change in the thinking of policymakers and the CBE in 2015. They finally recognized the well-known fact, taught in international finance courses in graduate schools, that fixed exchange rates, an independent monetary policy, and freely mobile capital form an “impossible trinity” or a “trilemma.” You can have two of these policies, but not all three. For a long time, Egyptian policymakers acted like they were the exception—but ultimately it became clear that they were not.

The trilemma concept does help to explain the actions of the CBE in 2015. In January, the pound was allowed to weaken to 7.24 pounds per US dollar. In February, the CBE also put a cap of $50,000 on the amount that could be deposited in a bank per month, ostensibly to wipe out the foreign currency black market, but it effectively also intensified capital controls that had been in place in a milder form since the beginning of the revolution. Further depreciation of the pound occurred in July, and then in October, when the currency crossed 8 pounds to the US dollar, the lowest it had ever reached historically.

Then came a surprise in early November, causing many to scratch their heads in disbelief. The CBE changed direction and started selling US dollars via banks in the market, leading to the strengthening of the pound against the US dollar. With everyone expecting a further weakening of the pound, this caught the market by surprise. The CBE was selling dollars when all the fundamentals—the negative effects on tourism following a Russian passenger jet, believed to have been downed by terrorists, crashing in Sinai, uncertainty about further Gulf financing because of low oil prices, and reduced foreign direct investment—would point to a move in the other direction.

The only plausible explanation is that importers, who are running short of foreign currency to cover their letters of credit, pressured the government and the CBE to provide the dollars. Others saw more sinister explanations, including punishing speculators who were betting on further devaluation of the pound or an artificial strengthening presaging a major devaluation, loosening of the peg, and even full flotation. Insofar as a prelude to floating is concerned, it would seem advisable to allow the currency to be weak, or undervalued, so that it would potentially appreciate when floating began. Doing it the other way around ensures a one way bet that the currency will weaken. To support the strengthening and generate greater demand for pounds, major banks raised interest rates on savings certificates to 12.5 percent, leading to the belief that the government would soon raise rates on its Treasury Bills.

It is obvious that the Egyptian pound is overvalued with respect to the US dollar. But by how much? A technical analysis by the IMF concludes that it is overvalued by as much as 16 percent. Other simple indicators confirm the overvaluation. For example, inflation in Egypt is running at around 10 percent a year, while it averages less than 2 percent a year in its principal trading partners. Egypt is thus losing external competitiveness by at least 8 percent a year. Furthermore, domestic short term interest rates are in the 10 to 12 percent range while interest rates on comparable maturities in the US are close to zero. From these two simple calculations, the pound is overvalued by 8-10 percent. It should be close to 9 pounds to the US dollar and all the signs are that it will be in 2016.

The IMF has argued that Egypt should move to a more flexible market-based exchange rate system. This would help exports, attract foreign direct investment, and reduce external imbalances that create the need for additional foreign financing. The Egyptian government and the CBE have a real aversion to floating, believing that this may result in a sharp depreciation, which would increase inflation by increasing the price of imports. But studies have found that the “pass-through” from exchange rates to inflation via an increase in import prices in Egypt is quite small and weak, not least because imports represent less than 20 percent of GDP. But successive Egyptian governments have subscribed to the exchange rate-inflation link, and it is difficult to disabuse them of this belief irrespective of the evidence.

All in all, the next governor of the CBE, Tarek Amer coming in on November 27, will find himself almost immediately in a quandary with respect to exchange rate and interest rate policy. If the pound depreciates, households fearing inflation, having been conditioned by government propaganda, will scream and importers would protest because they would have to pay higher prices for their goods. If the pound is kept stable, the country will eventually run out of international reserves and there will be a foreign exchange crisis with a sharp fall in the value of the currency. If capital controls are maintained, there will be strong objections from businesses and importers who cannot get the foreign exchange they need, not to mention that foreign investors will be extremely averse to investing in a country where it might prove difficult to transfer profits out. Finally, pushing interest rates high enough to create a demand for Egyptian pounds will make savers happy but raise business costs and thereby lower investment and growth.

In these circumstances, it is not surprising that CBE governor Hisham Ramez resigned and has left the CBE in the hands of an acting governor until Tarek Amer comes on board. In a sense, Hisham Ramez has gifted Tarek Amer with a poisoned chalice! But the good news is that Egypt is fortunate to have many able and knowledgeable economists, including in the CBE, who understand the problems relating to the exchange rate and monetary policy and have solutions to offer. Incoming governor Amer should listen to them and not to politicians, bankers, industrialists, and trade union leaders, all of whom have their own respective agendas and axes to grind. It is likely that these economists will press the CBE to reorient its managed floating regime to one that is closer to floating, possibly doing this gradually to avoid an abrupt large devaluation. The value of the Egyptian pound must be determined mainly by the market. It is up to the new governor of the CBE to convince the government there is no other way out.