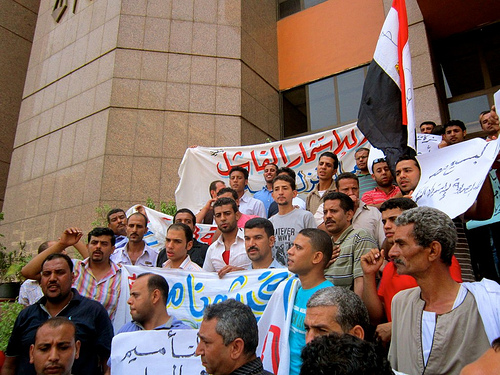 Saudi Arabia, the United Arab Emirates (UAE), and Kuwait rushed to congratulate the Egyptian military and offer fresh pledges of economic support to Egypt as soon as the generals threw out the Muslim Brotherhood and started massive arrests of its leadership over the last several days. Clearly happy with the change in Egypt’s government, the Gulf Arab countries moved fast to help the transitional government keep the economy afloat and prevent public finances and external imbalances from deteriorating further. With these recent announcements of support, all the major Arab oil producers—the larger Gulf countries, Iraq, and Libya—have a stake in Egypt’s fortunes. But whether these flows of assistance will increase long-term external political influence on Egypt’s future is by no means clear.

The new players at the table pledged $12 billion, consisting of grants, deposits in the Central Bank of Egypt (CBE), and transfers of oil products, in a space of 24 hours. The breakdown of the financing:

What did Qatar do?

Following the overthrow of the Mubarak regime, Qatar was the first mover among the Gulf Arab countries to provide financing to Egypt and still remains Egypt’s largest external financier. It delivered a total of $5.5 billion to the Morsi government, made up of $4 billion in deposits at the CBE and the rest in cash grants and shipments of liquefied natural gas (LNG). In addition, Qatar announced in 2012 that it would undertake an investment program in Egypt worth $18 billion over the next five years, although there has been no further word on this commitment.

The Egyptian government and the Qatar Central Bank agreed to convert $3.7 billion of deposits in the CBE into US dollar-denominated bonds. In May 2013, $2.7 billion was converted into an eighteen-month sovereign bond, and on July 1, a further $1 billion bond was placed carrying a three-year maturity. This operation gave Egypt immediate access to foreign exchange, albeit, at the cost of increasing the country’s external debt. For Qatar, the conversion was an equally good deal since it received a security that, if needed, could be sold to other investors; a simple deposit at the CBE could not. Furthermore, while a country could potentially default on a deposit in the central bank, it could not default on its sovereign bond issued in London without incurring heavy penalties and costs. Certainly this was a smart transaction by Qatar. It provided financing to Egypt and received a transferrable and guaranteed asset in return. Looking ahead, we should not rule out major new infusions from Qatar, despite the perception that they were committed to the Muslim Brotherhood. The Qataris relish surprises and they would certainly surprise their Gulf neighbours with a substantial new pledge to Egypt.

What does all this buy?

Egypt desperately needs external financing just to get through the next 12 months. The level of international reserves at the CBE has dropped to below $15 billion, of which some $3.5 billion is in gold. Useable foreign exchange reserves thus amount to only a little over $11 billion.

Over this fiscal year (July 2013-June 2014), the external financing needs of the country are projected to be around $18 billion, made up of foreign debt servicing of about $12 billion and an external current account deficit of $6 billion. One would need to add some increase in international reserves to this number, say $2 billion, to bring reserves up to $16 billion by the end of the fiscal year. In sum, the external financing gap for this year is about $20 billion.

How will this gap be filled? Presumably, a significant part of it, perhaps as much as $9 billion, could come from a rollover of a portion of Egypt’s maturing external debts. That leaves some $11 billion to come from elsewhere. The new financing from Kuwait, Saudi Arabia, and the UAE would cover $9 billion of this gap ($6 billion in deposits in the CBE and $3 billion in grants). However, it is important to note that all this Gulf financing would have to come in fairly fast so as to be effective. Gulf Arab countries have proven to be notoriously slow in disbursing their financial commitments. Even with this new financing, Egypt’s external position would remain precarious.

Of course, Egypt could reach agreement with the International Monetary Fund (IMF) on a program but this is highly unlikely in the short run. If it did, the financing picture would become much brighter. Not only would the IMF provide financing, possibly as much as $3 billion in the first year of the program, but the adoption of the program would also trigger additional financing from other donors and multilateral lenders. Absent an IMF program, with this additional new financing from the Gulf Arab countries, Egypt can only hope to keep its financial position from deteriorating further.

The political benefits are more ambiguous. The Egyptian military has received a quick highly visible seal of approval from those Gulf states most worried about the role of the Muslim Brotherhood in Egyptian politics. The military also can be confident that the Gulf funds won’t be subject to difficult conditions regarding a prompt return to a democratic process. The statements by Gulf states after the coup nodded to the new civilian president while heaping praise on the military.

For the new civilian leadership in Egypt, the aid will provide some breathing space as they get their economic and political act together, but it will also come with some not so subtle strings attached. The timing of the new flows made it abundantly obvious that they were directly linked to sharply limiting the role of the Muslim Brotherhood. Given that all of the funds are unlikely to be provided immediately and the probability that Egypt will need to ask for more soon, the secular democratic forces in Egyptian politics will find Egypt dependent on Gulf regimes with a strong interest in stability in Egypt and a very limited interest in progressive change, harkening back to the old days when Gulf leaders were on good terms with Hosni Mubarak.

The Saudis, Emiratis and Kuwaitis should not be under any illusion that their aid will make them popular or respected in Egypt. The huge swath of Brotherhood adherents will of course nurse a grudge for a long time. But most Egyptians resent their dependence on outside aid and many are not so subtly scornful of Gulf Arabs. Secular and many religious Egyptians fear the conservative religious influences emanating from the Gulf, and almost all Egyptians believe Egypt should be a country that does not need economic aid from the outside.

Coordinating with the US?

In an ideal world, the United States and the Gulf would lead an international effort to respond to Egypt’s needs in both the short and longer term, but this has proved an elusive objective since its initial attempts shortly after the Tunisian and Egyptian revolutions. The US economic aid program has been tied up by congressional holds, and is unlikely to respond quickly to the shaky, interim, ever changing civilian government in Egypt. Nonetheless, the United States and the Gulf should be focused on where things go from here. Egypt’s long-term economic and political stability depends on a return to an environment that attracts domestic and international private investment.

Current Gulf financing is only a temporary solution. All of Egypt’s friends and allies should be focusing on helping Egypt develop and finance a long term strategy to transform the economy and achieve sustained higher growth, significant job creation, and improved living standards for the population.

Mohsin Khan is a senior fellow in the Rafik Hariri Center for the Middle Eastfocusing on the economic dimensions of transition in the Middle East and North Africa.

Richard LeBaron is visiting senior fellow with the Rafik Hariri Center for the Middle East working on the Gulf region and leading a joint Hariri Center-Brent Scowcroft Center on International Security initiative, "A Strategic Dialogue for a New US-Gulf Partnership."