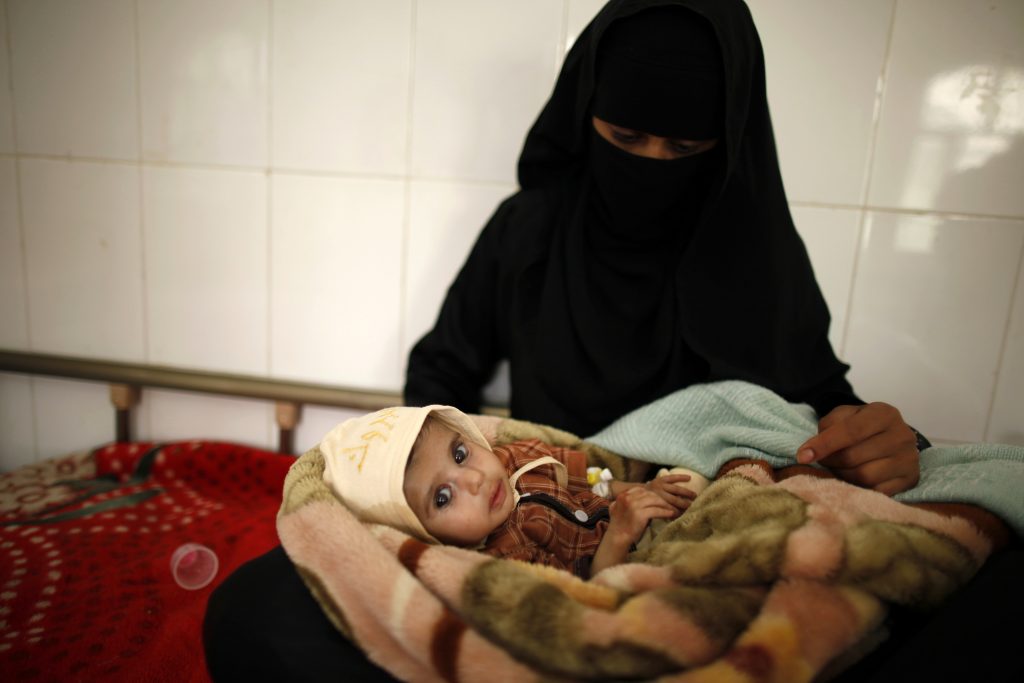 As drones and cruise missiles made their way 1,200 kilometers to strike Abqaiq and Khurais oil facilities in the north-east of Saudi Arabia, a day earlier Houthi fighters were carrying out raids in the Jizan region of Saudi Arabia. While the frequency of the Houthi drone and missile attacks on Saudi’s neighboring regions—namely Jazan, Asir and Najran, as well as targets up in the north from Mecca to Riyadh—has increased and caused political and physical damage in Saudi Arabia, so are the land-based incursions on the Saudi-Yemeni border. Meanwhile, a largely underreported environmental and humanitarian war is poised to take over. It will likely increase the frequency of humanitarian influx of Yemenis into Saudi Arabia.

The conflict in Yemen is one of the world’s largest humanitarian catastrophes and is caught up in a cycle of conflict, environmental degradation, water, energy and food insecurity. The water-energy-food insecurity nexus is one of the causes and a continuing result of the current Yemeni conflict. Saudi Arabia is accustomed to playing against known state actors and non-state actors—such as the Iranians or Houthis—and accounting for their actions and interests. However, it is not aware that it is also battling the environment in Yemen, and the consequences of exacerbating the water-energy-food insecurity nexus.

A classic example of a developing country facing climate change, Yemen is also plagued with natural resource scarcity—water, oil, and arable land—coupled with chronic natural resource mismanagement. It has long been flagged as one of the most water-stressed countries for decades; with ominous predictions that Sanaa would be one of the first capitals in the world to be deserted for drought.

Yet, the newest wave of conflict in Yemen, that fueled and legitimized the Houthi takeover, was due to the removal of energy subsidies by the Hadi government that heightened the cost of water extraction and fueled food price inflation. The removal of energy subsidies was due to the International Monetary Fund (IMF) recommendations—in the quest by the government, led by Yemeni President Abdrabbo Mansour Hadi, to access loans—and based on the IMF belief that the energy subsidy provided blanket aid that did not reach its intended targets and “which in 2013 accounted for about 7 percent of GDP, nearly 60 percent of the country’s hydrocarbon revenue, and more than 20 percent of total public expenditures.”

While the recent war has created around 3.65 million IDPs, there is an unaccounted internal migration from the south to north, and from rural to urban areas, fueled by the conflict, water, and food insecurity. Analysis of available data shows a correlation between change in active agricultural area (areas under cultivation) between 2014 and 2017 and the rapid displacement tracking with movement of the displaced to the north. With the decrease in proportion of active agricultural areas between 2014 and 2017, there was an increase in movement of displaced Yemenis both within and to other governorates.

Field evidence from the Tihama region confirms that the increasing price of energy cost of transport or irrigation pumps operation and water scarcity caused by destruction of water structures, have significantly affected agriculture and contributed to food insecurity in the area.

With agriculture employing more than 50 percent of the working force, the decline of agricultural activity due to environmental changes in addition to conflict is only pushing the population to migrate internally either in search of new agricultural opportunities, or to join the conflict as fighters. With 90 percent of Yemen classed as arid, semi-arid, or desert, the environmental war in Yemen will force the population to migrate north across the Saudi-Yemeni border.

Yemeni tribes are already present on both sides of the northern border. The Banu Hamadan clan—which includes the Yam, Bakil, and Hashid tribes—are spread across Al Jawf, Saadah, and Hajjah in northern Yemen and populate the regions of Najran and Asir in Saudi Arabia. Banu Al-Hakam and Khawlan are divided between Hajjah in Yemen and Jazan in Saudi Arabia. The Methhij clan in Yemen—under which several tribes are included in the governorate of Hajjah—are part of the larger Qahtan clan of Saudi Arabia, which populates Asir region in southwestern Saudi Arabia, north of Yemen.

Although the 1934 Treaty of Taif between Yemen and Saudi Arabia during the colonial British mandate relinquished the regions of Assir, Jizan, and Najran to the Saudis in return of Saudi withdrawal from Hodeidah and the Tihama coastline, many Houthis claim to have lost Yemeni territory during the reign of the penultimate Zaidi Imam Ahmad bin Yehya—who ruled the Mutawakkilit kingdom of Yemen before it split into the northern Yemen Arab Republic (YAR) and the southern People’s Democratic Republic of Yemen (PDRY) during the Yemen civil war—hence the reason they continue this ideological war against Saudi to reclaim it.

The ongoing conflict fostered by the Houthis further pushes thousands of migrants from the Horn of Africa to Saudi Arabia and the other GCC countries. They have also conducted raids into Saudi Arabia, most recently into Najran claiming the capture of 2,000 soldiers and mercenaries. With the food-water-energy insecurity pressure mounting and the corresponding migration to the north, it may be to the advantage of the Houthis to allow a humanitarian influx of Yemenis into Saudi Arabia to throw off its adversary preceding any military movement.

Saudi Arabia led a coalition into the civil war in Yemen in 2015 with an objective to decisively end the Houthi crawl on government and power in Yemen, stabilize the government against any renewed Arab Spring-style revolution, and neutralize the potential threat of Iran establishing a foothold in its backyard. Four years later, Saudi Arabia has found itself trapped in an endless war with an ever-evading political solution or military victory.

Before it jumps into finding solutions for the war with Iran and the Houthis, it needs to start addressing the environmental and humanitarian war at hand. Cutting oil exports to Yemen, weaponization of water, destruction of food supply chains, hampering of food and agricultural assistance are all counterproductive moves by Saudi Arabia. It will only increase the water-energy-food insecurity nexus and induce the environmental and humanitarian war in Yemen which will perpetuate the conflict.

Hadi Fathallah is director for Levant and Gulf Cooperation Council at NAMEA Group. He is also a fellow at the Cornell Institute for Public Affairs, and a Global Shaper, an initiative of the World Economic Forum. Follow him on Twitter: @Hadi_FAO.

When Yemen’s last peace talks in Stockholm took place in December 2018, only one female delegate was at the negotiation table. Assistant Secretary of the Yemeni Popular Nasserist Party, Rana Ghanem was the only female member, in the Yemeni government delegation. Over the past three Yemen peace talks, only three women have sat at the negotiation table.

When over $2 billion was pledged for the 2018 Yemen Humanitarian Response Plan (YHRP) earlier this year, it was considered not only a success but also the best funded response plan worldwide according to anonymous aid workers who spoke to the author during the UN General Assembly. So far, 65% of the pledged funds have been delivered. The delivery of the remaining funding is expected throughout this year.

In a piece published last year, I examined the interaction of water and conflict in Yemen and Syria, two countries whose severe water shortages have enabled competing actors to wield this precious resource as a weapon in violent conflict to the detriment of millions of civilians.

Image: A woman holds her malnourished boy at a therapeutic feeding center in northern Yemen (Reuters)