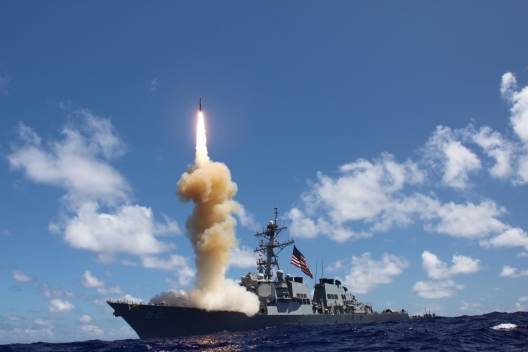 Attempting to defend Europe against a Russian ballistic missile attack would be “extremely challenging and costly,” according to the State Department’s top missile defense official.

Frank Rose, Assistant Secretary of State, said that “the size and sophistication of Russia’s strategic missile force” outweighs US and NATO defense interceptors otherwise “available to defend against such a large force.” Rose’s comments came at the Atlantic Council’s Annual Missile Defense conference.

Western officials have expressed concern over Russia’s rhetoric regarding nuclear weapons and intercontinental ballistic missiles (ICBMs). Rapidly deteriorating NATO-Russia relations, spurred by the conflict in Ukraine, have put the strength and efficacy of missile defense back into the spotlight.

Russian President Vladimir Putin recently announced that his country would add 40 new ICBMs to its arsenal. He credited the move to concerns over transatlantic missile defense systems near Russia’s borders. These missiles, according to Putin, would be able to “overcome even the most technically advanced anti-missile defense systems.”

Transatlantic leaders have countered the underlying rationale for this move, arguing that the missile defense architecture established in Europe is not directed at Russia, but Iran. US missile defenses “are neither designed nor directed against Russia,” according to Rose.

But Putin’s new ICBM announcement, the latest in a string of new pushes to modernize and bolster Russia’s defense, has raised important questions over where Europe’s missile defense systems should be pointed.

NATO’s missile defense systems, first rolled out in 2010, “were designed to protect against a limited threat like Iran, not a threat like Russia,” according to Friedrich Wilhelm Ploeger, who until recently served as deputy commander of NATO’s Allied Air Command.

But while the telemetry of NATO’s focus has changed from Iran to Russia since the Alliance first broke ground on its missile defense infrastructure in 2010, “the geography didn’t change,” according to Heather Conley, Director of the Center for Strategic and International Studies’ Europe Program. Despite Russian claims to the contrary, the EPAA was principally set up to deter against Iranian ballistic missile threats, not Russian threats, making it difficult to recalibrate existing infrastructure to fully deal with a threat from the East. Even if the missile defense systems could be fully repostured to face Russia, Rose cautioned that “we need to be very realistic about the technical capabilities of our missile defense systems.” Additionally, Rose conceded that “there is no political consensus in the Alliance” to enact such a change. And with an Iran nuclear deal still in flux, the opportunity cost of focusing missile defense to the East could mean leaving NATO’s southern flank exposed.

The second important question to answer is whether NATO’s missile defense system should be directed at threats from Russia. Proponents of such a move believe it will deter Russia from further aggression and reassure nervous Eastern European allies.

Ian Brzezinski, senior fellow at the Atlantic Council, argued that “we need to rethink NATO’s missile defense program to give it extra punch against Russian capabilities” and that the EPAA needs to be adjust to “better address threats to the East” and adapt to the new security environment NATO faces, which varies drastically from the environment it faced in 2010. Russia’s trend of using “rhetorical nuclear blackmail…is only going to ratchet up,” according to Conley, making a credible deterrent posture critically important to the Alliance.

Missile defense has become one of the most prescient issues in transatlantic security as Russia ups the nuclear ante, with NATO reticent to follow suit. On the nuclear question, Conley said NATO “is a bit rusty…reluctant, and reactive.” Nuclear deterrence has long been the elephant in the room of meetings among NATO’s leadership, but Russia’s “nuclear saber rattling” has brought it back to the fore. Nuclear weapons remain a “very controversial” issue in NATO, Conley believed, given the vestiges of anti-nuclear sentiments in Europe going back to the Cold War. But NATO “needs a new look at its nuclear doctrine” no matter how uncomfortable it is, Conley said. NATO should “not limit itself in its candid assessment” of its conventional and nuclear capabilities as it determines how to counter Russian military activities in Europe.

Missile defense has always been one of the most politically contentious issues in NATO-Russia relations, and NATO’s past rhetoric on missile defense may constrain its future posturing. For decades, “we have been going around saying that our missile defenses are not directed against Russia,” said Rose. If NATO were to suddenly change that line, Rose argued that it would “fundamentally give the Russians a political victory to say this is about us, we have been telling you all along.” The consequences of such a move are not relegated to Europe; the Chinese could worry that a similar situation would play out with the US missile defense architecture directed at North Korea turn toward them. But the question remains whether fears of an “I told you so” from Russia should command NATO’s missile defense posture – a concern that will only grow in NATO’s eastern members if Russia’s military aggression in Eastern Europe does not abate.

Robbie Gramer is Assistant Director of the Transatlantic Security Initiative at the Atlantic Council.