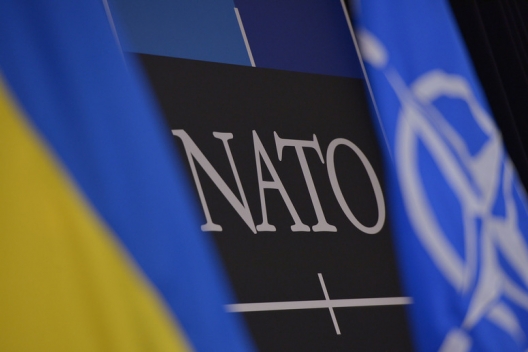 The New York Times asked seven experts; Should NATO be helping Ukraine face Russia?   Below are excerpts from each of their responses.

Andrew Bacevich:  The imperative of the moment is to restore NATO’s tattered credibility. Furthering enflaming the Ukraine crisis is unlikely to contribute to that end. Unless NATO members are willing to fight on Ukraine’s behalf, the alliance should refrain from meddling, tacitly acknowledging the existence of a Russian sphere of influence, much as it did in 1956 regarding Hungary and in 1968 with Czechoslovakia. Proud moments in freedom’s onward march? No, but in the long run prudent – as the presence of Hungary, the Czech Republic and Slovakia in the ranks of today’s NATO testifies.

So rather than further provoking Russia by suggesting that NATO’s eastward expansion will continue, the alliance should remove any doubts about its willingness to defend the territory it currently claims. Doing so requires more than brave speeches and more than creating a modest “rapid reaction force,” which will inevitably look more impressive on paper than in reality. You show what you’re willing to defend by putting boots on the ground.

Celeste Ward Gventer: There is nothing new about NATO conducting operations and providing assistance to nonmembers of the alliance. Indeed, it is routine (Kosovo, Afghanistan, Libya, et al).

Having recently spent four weeks in Ukraine working with its military, I do not believe that Ukrainian soldiers need others to do their fighting. They are tough, skilled and ready to battle ferociously for their nation. But their armed forces were starved for resources during the previous 25 years, particularly during the Yanukovich regime. Equipment was not modernized and Ukraine is now badly overmatched by new Russian weapons and surveillance assets. NATO allies could offer multiple forms of assistance that would plug gaps in Ukrainian capabilities and redress the imbalance. . . .

Ukraine needs and deserves much greater support from NATO and Europe, and quickly. It is not action that is provocative now, but diffidence and passivity. If the West fails to fully help Ukraine, it will go down in history as an abdication of responsibility, set the example for future aggressors, weaken the confidence of allies on the front lines such as Estonia and Poland, and expose NATO as a talk shop, divided by conflicting loyalties that can easily be exploited.

Celeste Ward Gventer, a former deputy assistant secretary of defense, is a national security fellow at the Clements Center for History, Strategy and Statecraft at the University of Texas at Austin.

Boris Kagarlitsky:  Of course, Western press blames Russia for what is happening in Ukraine — it is easier to do that than to analyze a complex situation or to recognize Western leaders’ own errors. And blaming President Vladimir Putin is also easy because it is true that Russia is in no way a model of democracy. The country has a well known record of electoral fraud and plenty of political prisoners. A year ago, Ukraine represented a merging democratic model for the post-Soviet region. But now, since the November 2013 coup, the country has it’s share of political prisoners, death squads and electoral fraud. As for the scale of corruption, the current Kiev government seems worse than the Yanukovich administration. . . .

The West is wrong to see President Putin and his entourage as the enemies. These people in power in Moscow are as liberal and pro-Western as they can be given the current mood in Russia. Their only goal is to be friends of the West, and to send their children and their money to London and Zurich. They even supply the Ukrainian army with spare parts for tanks and helicopters that are being used to fight against pro-Russian Donetsk forces and Russian volunteers. If there is to be a change of government and a free election in Russia, a leadership will emerge that will be far more hostile to the West and less liberal than Putin.

Boris Kagarlitsky is the director of the Institute of Globalization and Social Movements in Moscow at the Transnational Institute.

Jeffrey Sommers:  NATO should not be defending a nonmember nation like Ukraine, but it can help the country (and everyone) by saying no to NATO expansion. Conflict in Ukraine resulted from Russia’s concern that another former Soviet republic would fall into the orbit of Western Europe. For Russia, Ukraine’s admission to NATO would represent an existential threat as NATO encroached into the former Soviet bloc and then the former U.S.S.R. itself . . .

Europe can best help Ukraine by halting NATO expansion and working with Russia to develop it. The smart answer for Ukraine is “Finlandization” not NATO. Caught between East and West — and once part of the Russian Empire and war with the U.S.S.R., after World War II — Finland opted to develop its economy and security by engaging both Western Europe and the Soviet Union. The result was peace and prosperity in one of the great success stories of the 20th century.

Jeffrey Sommers is an associate professor at the University of Wisconsin–Milwaukee and a senior fellow at its Institute of World Affairs.

Ian Bond:  Ukraine is not some distant microstate whose fate can be safely ignored; it is a country of 42 million people bordering on four NATO allies. The country attacking it borders on four more. In 2008 NATO promised Ukraine membership, once Kiev met the conditions and if it chose to apply.

At the time of the Gulf War, Prime Minister Margaret Thatcher of Britain said: “Iraq’s invasion of Kuwait defies every principle for which the United Nations stands. If we let it succeed, no small country can ever feel safe again.”

Change that to read “Russia’s invasion of Ukraine,” and that is the reason NATO should support Ukraine. Inaction might encourage President Vladimir Putin to destabilize the Baltic States next, and other revisionist powers might follow his example elsewhere.

Ian Bond is the director of foreign policy at the Centre for European Reform in London and a former British Ambassador to Latvia. He is on Twitter.

Alexandra de Hoop Scheffer:  The Ukrainian crisis has revealed the political limits of the alliance, as leaders have been unable to promote the case for intervention. . . .

NATO’s deterrence policy clearly failed to prevent the conflict in Ukraine, despite the strategic partnership with Ukraine and the geographical proximity. Indeed, Russian leadership did not believe NATO would engage its forces as long as Article 5 was not at stake. The rigidity of Article 5 and Putin’s clever use of Ukrainian internal division have enabled the invasion of a European country, which was unimaginable a few years ago.

NATO’s future as a collective defense alliance is said to have found a new raison-d’être in the Ukrainian crisis. I would argue, however, that Putin’s bluff has also highlighted the divisions within the organization, and that this crisis could eventually widen the perception gap between eastern European and western European member-states.

Alexandra de Hoop Scheffer is a senior trans-Atlantic fellow and the director of the Paris office of the German Marshall Fund of the United States.

Artis Pabriks:  If we fail to change Russia’s aggressive behavior toward Ukraine, it will endanger the future security of other NATO members because the current Russian government view that “might is right” will be reinforced. If Ukraine falls, it is likely that Russian leadership will be unwilling, and even unable, to stop their revisionist policy. This will endanger neighboring members of the alliance, requiring greater political and economic resources to bring Russia to its senses and avoid future escalation elsewhere.

NATO and the European Union are both based on moral values that demand us to support weaker nations suffering foreign invasion who have chosen to become democratic countries.

Artis Pabriks, Latvia’s former minister of defense and foreign minister, is a member of the European Parliament.