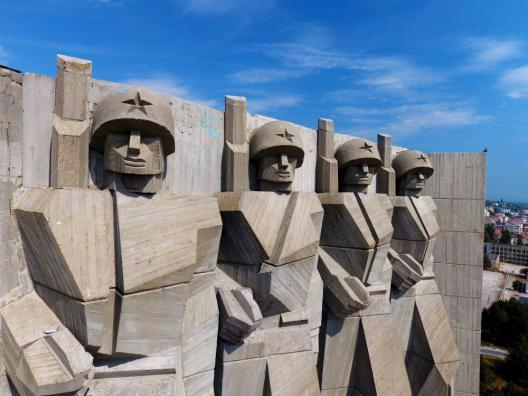 Massive concrete Red Army soldiers keep a watchful eye over the city of Varna (photo: Adam Maisel and Will DuVal)

The November election of Rumen Radev as president of Bulgaria has contributed to growing concerns that several former Soviet satellite states are drifting back into the orbit of Putin’s Russia. European anxieties have remained heightened since the 2014 Russian annexation of Crimea, state-sponsored proxy war in Ukraine’s eastern borderlands, and a myriad of other events including meddling in elections that allow Russia to impose soft power. A rash of pro-Russian candidates have expanded Russian influence over former Soviet states, and many worry that Bulgaria may become the next Trojan horse state. Considering Russian President Vladimir Putin’s unabashed ambitions to restore Russian greatness by hook or by crook, such political shifts take on more alarming context.

Further complicating a read on whether Bulgaria leans decidedly east or west is the narrow plurality recently won by center-right and generally pro-Western GERB party (headed by Prime Minister Boyko Borissov) in parliamentary elections. Still, in many ways President Radev personifies Bulgaria’s tightening diplomatic tug of war between courting a Russian East and a NATO-aligned West. The former MiG-29 pilot and chief of the Bulgarian Air Force served as an officer in a Warsaw Pact military, but has also received training at the United States Air Force’s Air War College at Maxwell Air Force Base. His past statements supporting Russia’s annexation of Crimea are worrying, and in light of other recent election results in Eastern Europe, Radev’s Russian sympathies have NATO officials wondering what Bulgaria’s trajectory may be: will it continue its balancing act between Western Europe and Russia or drift closer to the Russian geopolitical sphere of influence?…

A 2015 Alpha Research poll indicated that 62.8 percent of Bulgarian respondents said they would vote in favor of EU and NATO alignment if a referendum were held on the issue (compared with the 32.9 percent who would prefer alignment with Russia)….

The center-right and generally pro-European Union Citizens for European Development of Bulgaria party (GERB) pulled off a narrow victory in the general election this March to secure a slim plurality of parliamentary seats (ninety-five of 240) and installment of the prime minister. GERB will likely have to form a coalition government with blocs that do not share the same sentiment for the EU and NATO. The Bulgarian Socialist Party, championing pro-Russian and anti-Western messaging during the campaign, has seen their best results since 2005, presenting a challenge to pro-European policy initiatives for any incipient coalition. GERB has been in power for nearly a decade and is currently under the leadership of former Bulgarian Prime Minister Boyko Borissov, though the party lost ground in the recent election….

For Brussels, Bulgaria’s location dampens Russian influence in the Black Sea region and keeps NATO contiguous through the Balkans and Southern Europe. Inclusion of Bulgaria in NATO prevents political exploitation of nationalist sentiments between allies, such as resurfacing historical grudges between the Bulgarians and the Turks. Additionally, several of Bulgaria’s military bases now fall under joint US usage agreements, such as the Novo Selo Training Area that has evolved into one of NATO’s premier armored training facilities in Eastern Europe.

Maintaining Balkan stability has been a priority for both the European Union and NATO, and Bulgaria has already exhibited its commitment to NATO since 2004 through relatively generous contributions of personnel and assets for missions in Kosovo and Afghanistan. However, Bulgaria’s new president may hinder its willingness to participate in external NATO missions, permanently host NATO allies on Bulgarian soil, or support NATO exercises directed towards countering a possible Russian threat—like the decision not so support a joint NATO-backed naval force in the Black Sea.

Recent Russian interference in the internal politics of Balkan nations has caused concern in the region following allegations of a Russian-backed coup attempt in Montenegro last October. If similar events were to occur in a current NATO member state, it would likely sow doubt within the alliance and raise an important question about the vulnerability of the Balkan States to Russian destabilization efforts….

There may be a tendency to read too much into Radev’s election and what it may mean for Bulgaria’s future relations with both Russia and NATO. As the saying goes, all politics is local and domestic concerns tend to be a greater driver than foreign affairs. Despite Bulgaria’s rich history including centuries of Ottoman rule and collusion with the Soviet Union, its people still maintained a separate national identity. Still, there are plenty of reasons to remain wary, particularly if European election results continue to lean towards the East and shake the status quo; should Putin seek to further disrupt the EU and NATO states, Bulgaria—a former loyal Warsaw Pact country almost entirely dependent on Russian energy, deeply intertwined with Russia by trade, and reliant on Russian military hardware—looks to be an ideal candidate.

In Bulgaria, the Kremlin has many levers it can pull, but not all of them. Public opinion continues to favormaintaining Bulgaria’s membership in the EU and NATO over orienting foreign policy towards improving Russian relations. However, it is important to note the same poll discovered that Bulgarians (especially older ones) generally uphold their positive attitude towards Russia despite Russian actions in Ukraine. Ongoing European Union development projects including transportation and public utility improvements have provided significant investment in Bulgaria  that should reduce the country’s reliance on Russia. The notion that Bulgaria is a “Trojan Horse State” may be an exaggeration, but extensive (and increasing) political relations, economic dependence, and historical ties to a newly revanchist Russia could dampen Bulgaria’s commitment to European institutions and set the conditions for a particular form of “state capture.” One should not assume that Russian-Bulgarian ties are inherently nefarious in nature, but the greater the scope and depth of penetration, the more easily influence can be achieved. Continued development projects, sustained NATO cooperation (including support to de-Russifying Bulgaria’s military hardware), and support for anti-corruption agencies may deny Russia many of the levers—so apparent in the monuments, infrastructure, and other symbols that dot Bulgaria’s landscape—it seeks to manipulate.