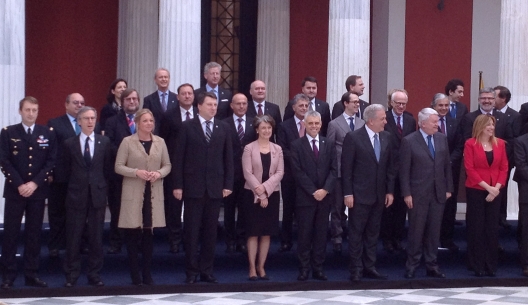 The informal meeting of EU Defence Ministers took place on 20 and 21 February in Athens, chaired by Greek Minister of National Defence Dimitris Avramopoulos on behalf of EU High Representative Catherine Ashton. It consisted of 3 working sessions dedicated respectively to the follow up to the European Council on security and defence, ongoing EU operations, and the situation in the Central African Republic.

At the end of the meeting Minister Avramapoulos stated: ‘Our meeting has confirmed the dynamic CSDP agenda. There is a lot of work ahead on the follow-up to the December European Council. And as we prepare to deploy in the Central African Republic, the EU will soon be conducting 5 military operations, a clear confirmation of the growing role of the Union as a security provider’.

The conclusions of last December’s European Council were discussed during the first session. These conclusions will shape the Common Security and Defence Policy (CSDP) agenda until June 2015, when leaders will again discuss security and defence. Ministers shared a positive assessment of the outcome of the European Council and called for maintaining momentum through concrete actions and tangible progress. Ministers addressed in particular the work towards a Maritime Security Strategy, rapid response, the support to capacity building of local and regional partners, and the development of a policy framework for more systematic and longer term defence cooperation within
the EU.

The discussions on Friday were dedicated to EU military operations, which remain at the heart of CSDP. Ministers first addressed the state-of-play and perspectives for the four ongoing EU military operations –EU NAVFOR Atalanta,EUFOR Althea, EUTM Somalia, and EUTM Mali– following briefings by the respective Operation Commanders. Ministers welcomed the tangible results achieved by these operations.

A separate session was devoted to the Central African Republic. The EU is actively involved in efforts undertaken by the international community to address the political, humanitarian, security and human rights dimensions of the crisis. The operation EUFOR RCA was established by the EU Council on 10 February and will be deployed as soon as possible with the specific purpose to protect civilians.

Ministers were briefed by the United Nations on its assessment of the situation, and by the newly appointed Operation Commander for EUFOR RCA, Major General Philippe Pontiès, on force generation and the state of preparation of the operation’s deployment. Ministers expressed concern at the situation in the Central African Republic and called for the swift deployment of the EU operation.