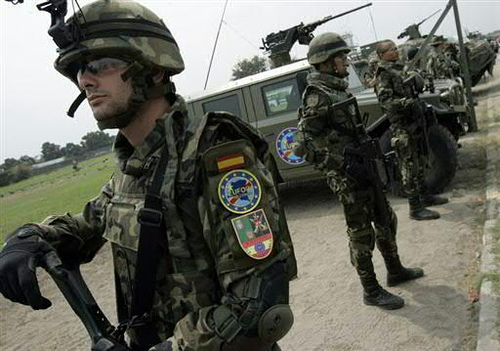 The EU has been spurred into action by communal bloodshed in Central African Republic that led a senior U.N. official to warn last week of a risk of genocide there without a more decisive international response.

Meeting in Brussels, the ministers approved an outline plan to send a battalion-sized force to the violence-torn country but detailed military plans still need to be worked out. It is not yet clear which countries will provide the troops. . . .

EU officials hope the EU force, which will be based around the capital Bangui and its airport, will start arriving in Central African Republic by the end of February.

It will stay for up to six months before handing over to an African Union (AU) force that is building up its strength on the ground. . . .

It is not yet clear which EU countries will contribute troops. Estonia has promised soldiers, and Lithuania, Slovenia, Finland, Belgium, Poland and Sweden are among countries considering sending troops, diplomats say.

Large EU countries such as Britain, Germany and Italy have said they will not send ground troops.

However, military officials told ministers that the battle groups would not be suitable for Central African Republic because they were equipped to deploy for just 120 days.