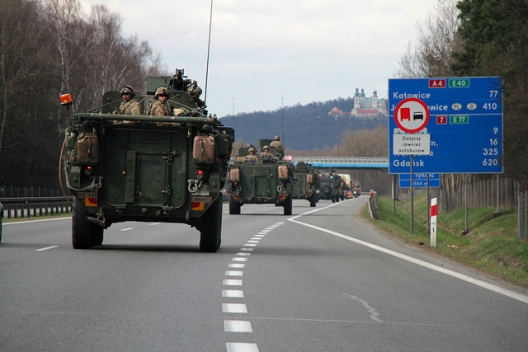 U.S. troops levels in Europe have reached record-low levels, slightly more than 27,000 soldiers, before the newest cut was announced.  Some of our NATO partner nations recognize the risks. France, Germany, the Netherlands, Poland and Sweden are increasing their military spending, a reversal of a post-Cold War trend that still means most European countries have flat defense budgets….

My NATO friends were very clear in their assessment that the modest nature of these events [recent US military exercises in Europe] and the American forces participating in them is readily apparent to both our European partners as well as to the Russians. In short, we’re not fooling anyone – we just don’t have enough there.

With only two combat brigades permanently stationed in Europe and a few other forces periodically rotating in from the Unites States for exercises, the U.S. presence is negligible in the grand scheme. American commanders are stretching that force as far as they can, but it is a thin line of defense to be sure. At some point—possibly very soon—the symbolism of U.S. support loses credibility.

I am troubled by continued efforts to reduce the size of America’s land forces and especially the U.S. Army. Sequestration has set us on a dangerous downhill trajectory that will send the U.S. Army to strength levels not seen since the opening days of World War II. This must be stopped, and stopped now, with some balance achieved in active, Guard and Reserve forces to providing us a combined fighting strength of 1 million or more soldiers, at least half in the active forces and half in the Guard and Reserve.

Clearly, the redirection of our diplomatic, economic and military power to the Pacific region is extremely important to U.S. interests in the future. However, recent events in Europe should show us that next to the defense of the homeland, Europe’s security is inextricably tied to our own and remains among our highest strategic priorities. It has always been this way and it will always be this way.

I am not convinced that the United States has or will have the wherewithal to demonstrably reassure allies and deter further aggression in this vital part of the world. For some reason, we seem to presume demonstrations of latent power will be sufficient. I remain skeptical.

Ret. Army Gen. Gordon Sullivan is president of the Association of the United States Army and was the 32nd Army Chief of Staff.