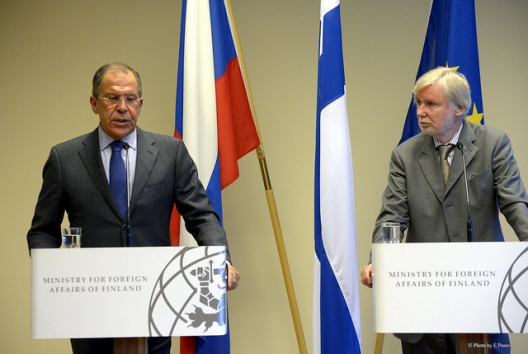 President Sauli Niinisto
WP: How have events in Ukraine and how have these violations in Finland’s airspace affected the mood here in Finland?
SN: We have a long history with Russia — not that peaceful all the time. So everything Russians are doing, surely the Finns notice and think very carefully what that might mean.

WP: This country was successful in staying non-aligned during the entirety of the Cold War. You say we’re at the gates of a new Cold War. The way this new Cold War evolves, is it possible to be non-aligned? Or is this a situation where you have to choose sides?
SN: We are not part of NATO. But we are part of the European Union and part of the West. I would answer your question by explaining how we see our security at the moment. It’s a balance. We still have conscription. We have a strong army. It’s 250,000 men.

WP: A lot smaller than Russia’s army.
SN: But 250,000 men is something you have to at least take notice of. We are increasing our defense budget. We are cooperating with Sweden very deeply and that is developing very fast. We are advanced partners of NATO. And in the end I like to mention the E.U. dimension. We all know according to the Lisbon Treaty we have given a guarantee that we will help member states if they face severe problems.

WP: But that’s not the same sort of ironclad guarantee that is Article 5 under NATO.
SN: No, it’s not the same kind of guarantee. But it’s nevertheless a very strong political statement. . . .

Foreign Minister Erkki Tuomioja
The Washington Post: How do you regard Russian violations of Finnish airspace this summer?
Tuomioja: We have a 1,300-kilometer border between Russia and Finland. From our point of view, but also from a Russian point of view, it’s the most stable and least problematic frontier they have, and I believe they want to keep it that way as long as they have no reason to believe that the Finnish territory would be used for hostile action. That’s the basis of our position since the second World War. . . .

WP: Do you think NATO membership is going to be an issue in the election this coming spring?
ET: I don’t think so, because no party has interest in doing so. The Conservative Party and the Swedish Party are very much in favor of NATO membership. But the electorate is not, so they are not going to win if they do it. And neither are we, the Social Democrats, going to make this into a bigger issue.Yes, people are concerned: Is this the return to the Cold War? I have never experienced any previous elections where there is so much interest in security and foreign policy. If I am at a meeting where I speak half about foreign policy and security and the other half about internal politics and economics, the discussion will mostly be about the first, nothing about internal politics. . . .

WP: When there are the violations, as there were this summer, what has your message been to [Russian Foreign Minister Sergei] Lavrov?
ET: We say this: We have the evidence and this is unacceptable. Can you see to it that this is not repeated? I think the Russian foreign ministry is not party to this. They are more embarrassed by this, including Lavrov himself.