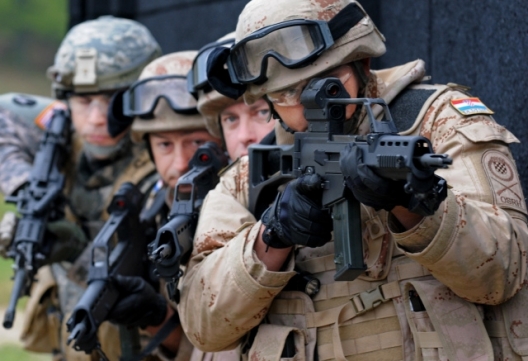 As ISIS consolidates its position across the Syrian and Iraqi divide, NATO must realize that it is only a matter of time before a wave of EU-passport-bearing jihadists will be headed back home to wreak havoc. Those AK-toting fundamentalists are a bit busy at the moment destroying two Shiite/Alawite regimes in Iraq and Syria, respectively, but the eye of Sunni extremism will inevitably turn its attention to the capitals of Europe. This means NATO must begin now to do all it can to undermine this potential future threat, and the key will be along the Turkish border. . . .

Lest we forget, the war now raging in Iraq is also a cyberbattle, full of dangerous activity — including jihadist propaganda, probes from ISIS and other radical Sunni groups, and social networks both for and against the Caliphate. NATO should be involved in understanding what is occurring on the cyberborders of the alliance just as much as it should focus on the physical boundaries. This means using individual national capability and fusing the information via the operations center at the Supreme Headquarters Allied Powers Europe, and potentially using the expertise resident in the NATO Center for Cyber Defense in Tallinn, Estonia. At the moment, this is not occurring at the level of NATO operations, and it should. . . .

[T]he relatively new NATO Special Forces Command, headquartered in Mons, Belgium, could supplement the U.S. mission to Iraq. If 300 U.S. Special Forces are going to Iraq, why are there not at least another hundred or so special forces from around the alliance with them? Why is this uniquely a U.S. mission? The NATO Special Forces Command is fully capable of putting such a force package together under direction of the supreme allied commander for operations and moving them forward alongside Americans. Unfortunately, there appears to be little appetite for this among many of the member nations. Nonetheless, the case for European engagement alongside the United States is quite clear, given the distinct dangers to Europe posed by the rise of a jihadist state. . . .

Finally, and certainly most controversially, NATO Special Forces could cross the Turkish border into both Syria and Iraq in order to understand what is happening on the ground, provide an unbiased conduit of information and intelligence, and prepare for possible NATO operations in either Syria or Iraq. There are U.S. and NATO air assets operating on the Turkish side of the border (mostly focused on helping Turkey with the Kurdish insurgency), that could potentially help support such a mission — at least with surveillance and intelligence. This would be a high threshold to cross, but the option should be under discussion by the alliance leadership. . . .

Simply “ruling out” NATO operations in both Syria and Iraq is not in the best interest of the alliance. This region of the world is spinning rapidly out of control, with dangerous implications for both Europe and the United States. The alliance has enormous capability, but does it have the political will to lean into this dangerous situation? Done in a measured and sensible way — with a focus on the Turkish border — would make sense. NATO needs a quick shot of strong Turkish coffee to get its energy level up and make some decisions about engagement — because what’s emerging now is a clear and present danger along the southern flank of the alliance.

James Stavridis is a retired 4-star Navy admiral who serves today as the 12th Dean of The Fletcher School of Law and Diplomacy at Tufts University.