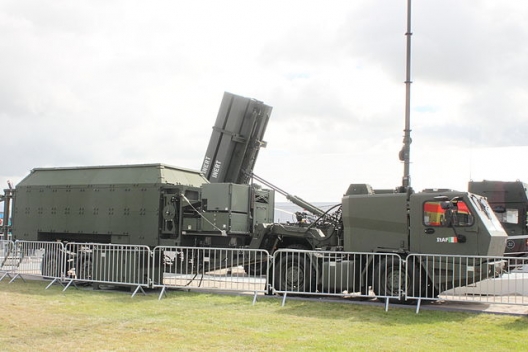 Lockheed Martin and MBDA Deutschland are expecting to sign a contract with Germany next year to produce the Medium Extended Air Defense System (MEADS) and with that stamp of approval the pair is setting their sights higher.

“We think that MEADS has the opportunity to be the NATO air and missile defense system,” Marty Coyne, Lockheed Martin’s MEADS director, told a few reporters at DSEI.

And the market for modernized air and missile defense capability is a gold mine. “We estimate it conservatively at $100 billion over the next 15 plus years,” Coyne said.

“We also consider ourselves right now in the lead,” he added, because the program is nearing the end of a 10-year development process that has culminated in three successful flight tests, bringing key components to a very high technology readiness level.

It wasn’t long ago when the future of MEADS was hanging in the balance. MEADS started as a tri-national agreement among the US, Germany and Italy. The US eventually scrapped plans to buy the air and missile defense system meant to replace Raytheon’s Patriot system, but agreed to spend $800 million to finish a two-year proof-of-concept phase that means all three countries can access the technology developed through the program.

The future of the program depended on Germany choosing the system because Italy, which wants MEADS, couldn’t afford to go it alone. So Lockheed and MBDA waited over a year for Germany to conduct an analysis before making a final decision on a system.

“Germany will not be the only MEADS customer, it will be the first,” Coyne said. “There always has to be a need and we are even more convinced after being at the show. The interest by all nations in Europe that come past our stand, that have stopped and wanted to get information about MEADS, is far greater than we ever expected.”

Why the interest? The threat is real, Coyne said. “All countries in NATO Europe have recognized this threat of a combination of ballistic missiles and cruise missiles and unmanned all coming from different directions and NATO has awoken to this.”

Russia’s incursion into Ukraine and its annexation of Crimea has only heightened the concern, according to Coyne, and there are only four NATO Europe countries — Germany, the Netherlands, Spain and Greece — that have air and missile defense systems, but these “don’t have a modern capability.”