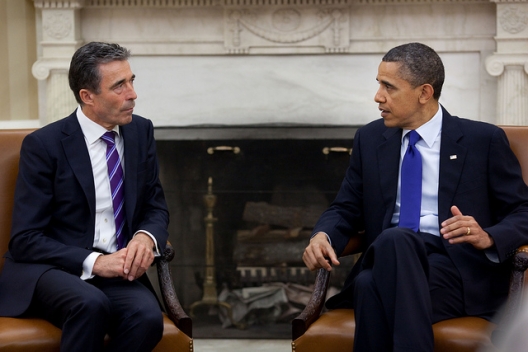 [P]ity [Secretary General Anders Fogh] Rasmussen’s successor. NATO is in bad shape, and morale is low. That is because of America’s changing attitude toward the alliance, the impact of the euro crisis on defense spending, and NATO’s uncertain future after the end of its combat mission in Afghanistan later this year.

Take U.S. President Barack Obama’s pivot away from Europe toward the Asia-Pacific region, a shift that one could have expected to take place much earlier. The move reflects only not America’s growing concern with the military rise of China but also its frustrations with Europe’s inability to create a strong security and defense policy. The U.S. administration, with its security guarantees for its allies across the Atlantic, is tired of being taken for granted by Europeans.

Yet within NATO, Washington’s changing attitude toward Europe and the transatlantic alliance has provoked no serious debate. It is as if the issue were taboo. Worse, it’s as if this strategic shift by the United States did not even affect NATO. Whoever takes over from Rasmussen will by necessity have to begin a major discussion about the meaning and durability of the transatlantic relationship. That will require a huge amount of support and input from Berlin, London, Paris, and Warsaw. . . .

To make matters even worse for the incoming NATO secretary general, member states are not going to spend more on defense, and they are not going do more “smart defense,” the two drums that Rasmussen has kept beating. That is not just because of the consequences of the euro crisis. It’s also because, as a whole, Europeans do not feel threatened. And as long as they do not feel threatened, leaders will be unable to justify increasing defense budgets, or sharing military resources if that leads to job losses.

This perceived lack of a threat is self-delusional. Very real threats exist on Europe’s eastern borders and in the Caucasus—not to speak of the implications of the civil war in Syria and the deepening crisis in Egypt.

By turning a blind eye to these threats and by pretending that America’s security interest in Europe is permanent, European leaders are proceeding down a dangerous cul-de-sac. NATO’s new secretary general will need nerves of steel, a bold imagination, and the tongue of an angel to make them turn around.