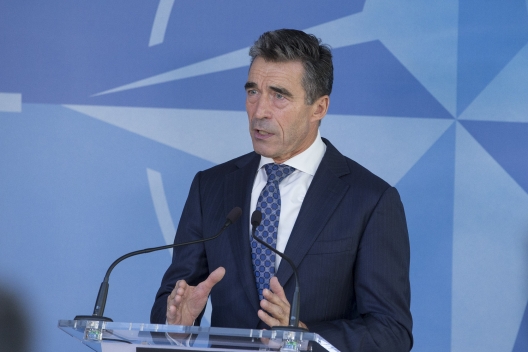 From AFP:  NATO said Wednesday it will continue to help Ukraine, which has close ties with the military alliance, to push ahead with democratic reforms.

“Ukraine is a close and long-standing partner to NATO. And NATO is a sincere friend of Ukraine,” alliance head Anders Fogh Rasmussen said.

“We stand ready to continue assisting Ukraine in its democratic reforms,” he said as he went into a regular NATO defence ministers meeting.

Rasmussen said recent developments in Ukraine, once a communist Moscow satellite, will be discussed at the two-day meeting at NATO HQ in Brussels.

From NATO:  RASMUSSEN: [L]et me stress that it’s for the Ukrainian people to determine what should be the future of their country. We take it for granted that all nations respect the sovereignty and independence and total integrity of Ukraine. And this is a message that we have also conveyed to whom it may concern. . . .

(Euronews) Q: Do you think that Ukrainian membership could be back on the agenda?

RASMUSSEN: That’s for the Ukrainians to decide. Actually, I don’t think it’s the most urgent priority for the new Ukrainian leadership. We all remember what we decided at the NATO Summit in Bucharest in 2008. We decided that Ukraine will become a member of NATO, of course, provided the country so wishes and provided the country fulfils the necessary criteria.

So it’s for Ukraine to decide. But I think there are more urgent priorities to address right now. We stand ready to continue our engagement with Ukraine. And tomorrow we will have a meeting in the NATO-Ukraine Commission and continue the high-level dialogue we have with Ukraine.