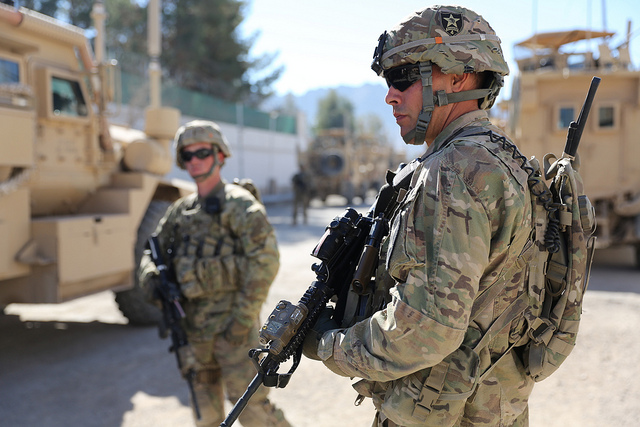 After months of tense negotiations over the size and role of a postwar presence in Afghanistan, senior North Atlantic Treaty Organization officials say they are planning a more minimalist mission , with a force consisting of fewer combat trainers and more military managers to ensure that billions of dollars in security aid are not squandered or pilfered.

The shrinking ambitions for the postwar mission reflect fears that the United States Congress and European parliaments might cancel their financial commitments — amounting to more than $4 billion a year, the largest single military assistance program in the world — unless American and NATO troops are positioned at Afghan military and police headquarters to oversee how the money is spent in a country known for rampant corruption.

The reduced scope is also a result of conflicting interests among military and political leaders that have been on display throughout the 12-year war. Military commanders have advocated a postwar mission focused on training and advising Afghans, with a larger number of troops spread across the battlefield. Political leaders in Washington and other NATO capitals have opted for smaller numbers and assignments only at large Afghan headquarters.

Any enduring NATO military presence in Afghanistan “is tied directly to the $4.1 billion and our ability to oversee it and account for it,” a senior NATO diplomat said. “You need enough troops to responsibly administer, oversee and account for $4 billion a year of security assistance.”

The senior diplomat — who, like other military officials, spoke on the condition of anonymity to discuss the alliance’s deliberations — described continued financing of Afghan security forces as vital to avoid political chaos and factional bloodshed after NATO’s combat role ends in December 2014. “It’s not just the shiny object, the number of troops,” he said. “Perhaps much more meaningful is, does the funding flow?”

NATO has endorsed an enduring presence of 8,000 to 12,000 troops, with two-thirds expected to be American. That is well below earlier recommendations by commanders, but senior alliance officials say larger numbers are unnecessary given the more limited goals now being set by political leaders.

The postwar plan depends on a security agreement between the United States and Afghanistan concerning the number, role and legal protection of American troops. But one lesson of the war in Iraq is that domestic politics in the war zone and in Washington can scuttle a security deal, resulting in zero American troops remaining. Afghanistan’s desire to assure the continued flow of billions of dollars in assistance is one reason American and NATO officials are expressing guarded optimism that an agreement will be reached. . . .

The NATO personnel overseeing the security aid would be assigned to Afghan ministries and military headquarters, where they would review payments to make sure the money went to its intended purposes, like fuel, supplies and training. They would review money allotted to and disbursed by those programs and provide regular reports to NATO leaders assessing whether the goals of the assistance were being met.

Military officials said that initial plans had envisioned a far larger enduring presence of foreign trainers and advisers, who would have been spread across the country and embedded within small units of Afghan troops as they carried on the tactical fight against the Taliban. Only over time would foreign troops have been reduced and withdrawn back to headquarters.

Under the new plans, NATO military personnel would be assigned only to the headquarters of the two security ministries, defense and interior; to the six Afghan National Army corps headquarters; and to the similar number of national police headquarters. They would also be well represented in army and police training institutions.