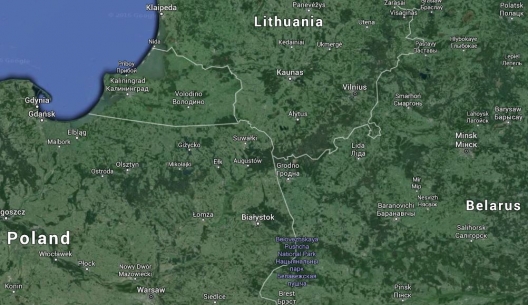 The Pentagon’s decision to quadruple its 2017 budget for European defence due to the perceived threat of Russian aggression and the recent RAND report noting the difficulties NATO would have defending the Baltic States, are once again bringing to the forefront the risks on Europe’s frontier states. The top brass of US military forces, like U.S. Army Europe commander Lt. Gen. Ben Hodges, have also already noted that a narrow piece of land connecting two NATO member states Poland and Lithuania – the Suwalki Gap ‒ could potentially be a target of Russian military aggression. Capture by hostile forces of Suwalki or bordering Lithuanian territory would cut off the three Baltic States from other NATO countries. Analysts have likened Suwalki to the Cold War era’s Fulda Gap in Germany where NATO planned and prepared for hypothetical Soviet attacks. In addition to the region’s problematic geography and militarized environment due to neighbouring Kaliningrad and Belarus, the Suwalki Gap is different and potentially an even more vulnerable target because the Kremlin could exploit the region’s historic ethnic tensions.

The territory dubbed the Suwalki Gap (“przesmyk Suwalski” in Polish) is a north-eastern Polish territory bordering Lithuania in the north-east, Kaliningrad in the north-west, and Belarus in the south-east. The nearly 64 miles wide land strip in the Sejny district is also so called “Suwalki corridor” or by the Lithuanians referred to as the “Suwalki triangle” (based on the three towns of Punsk, Sejny, and Suwalki).

Kaliningrad and Belarus: military build-up
The neighbouring and militarized Russian enclave of Kaliningrad houses part of the 56 warship-strong Russian Baltic Fleet at the port of Baltiysk, as well as submarines, land troops, a naval brigade and two military airbases. In case of a conflict, Russian missiles deployed in Kaliningrad could block the eastern part of Poland and a large part of the Baltic States from any naval or land support from NATO allies. Moreover, since 2003 the Russian military has access (albeit highly regulated) to transit through Lithuania to supply its troops in Kaliningrad. Meanwhile, neighbouring Belarus, which remains among Russia’s closest and most loyal political and military allies, has been in discussions to house a large Russian air base.

Historic Polish-Lithuanian disputes in Suwalki
Considering that Russia’s foreign policy and military operations in the post-Soviet space have often fuelled and exploited local ethnic tensions – such as in Ukraine’s Crimea and the Donbas, Georgia’s South Ossetia and Abkhazia, and Moldova’s Transnistria, ‒ it is crucial to understand the history of ethnic tensions in relation to the Suwalki triangle. This territory has been an object of Polish-Lithuanian disputes for nearly a hundred years. Today this area has a sizable Lithuanian minority. Lithuanians are mostly concentrated in and around the three towns constituting the Suwalki triangle: the town of Punsk totalling about 3.6 thousand or approximately 80% of the town’s inhabitants. The town of Sejny counts about 1.6 thousand Lithuanians or about 30% of its inhabitants, while the town of Suwalki also includes some 500 Lithuanians.

Historically the lands of the Suwalki triangle were part of the Grand Duchy of Lithuania, which after the final partition of Polish-Lithuanian Commonwealth in 1795 belonged to Prussia, Duchy of Warsaw and finally Tsarist Russia. In the end of 1910s, when the two nation states of Poland and Lithuania were forming and declared their independence, the Suwalki triangle became a battlefield of the two countries. Besides historical reasons, for Lithuania this area was important culturally – at the turn of 20th century many intellectuals were educated here and played a prominent role in the rebirth of Lithuanian state. Meanwhile, Warsaw sought to regain this territory due to the sizable numbers of Polish speakers. Thus, Lithuanian and Polish troops clashed in the Sejny Uprising of 1919 and the Battle of the Niemen River of 1920 after which the two countries signed the Treaty of Suwalki recognizing Punsk, Sejny, and Suwalki as part of independent Poland. Vilnius – the historical capital of the Grand Duchy of Lithuania – was also agreed to be part of Lithuania, but in two days it was captured by Polish troops and remained occupied until 1939. This military intervention, along with perception that Warsaw pursued polonization policies in the Suwalki triangle, resulted in tensions between the two countries that continued to reverberate until present day.

Contemporary Polish-Lithuanian Tensions
At the end of the Cold War and following the independence of both countries from Soviet domination, tensions between Poland and Lithuania persisted. Today they are driven mainly by the question of the Polish national minority in Lithuania, specifically issues related to their state-funded Polish-language education, Polish name and street spelling, and the repatriation of pre-Soviet land ownership rights. Similarly, the Lithuanian minority in Polish Sejny district complain regarding their education and language issues, humiliating monuments in Berznyk near Sejny, or attacks against local Lithuanian language inscriptions.

Poland’s historic occupation of Vilnius and the desire of the Polish minority for territorial autonomy in Lithuania in the 1990-1991 period have resulted in many Lithuanians having antagonistic views towards Poland. For instance, after Moscow’s annexation of Crimea in 2014, Poland was named as the second most hostile country to Lithuania after Russia in public polling. In October 2015 the bilateral tensions were again stirred up by the decision of newly elected Polish president Andrzej Duda to veto the law allowing the use of national minority languages (including Lithuanian) in Polish districts as a supporting language.

Russian Influence in Suwalki
In addition to the local Polish-Lithuanian tensions, there is also a potential dimension of Russian influence in Suwalki. While Russia has long sought to engage Russian speakers and even other ethnic minorities in the former Soviet republics through various youth military camps and militarized tournaments, Moscow has also seen some success in attracting the participation of Polish citizens. For instance, the International Strikeball Tournament “Put’ k Pobede” (Road to Victory) has been taking place in Russia since 2010 and drawn participants from Poland in 2014, 2013, and 2011. The event enacting real-life scenarios of potential Russian military conflicts is organized by the Spetsnaz Rus ‒ a Russian organization active since 2005 and composed of Veterans of Spetsnaz (Special Forces) and Participants of Military Operations Association. For instance in the 2014 event, a fight was simulated between the Syrian government (supported by Russian troops) and rebels (supported by the US).

In light of territorial conflicts and separatism that have rocked the post-Soviet states of Ukraine, Georgia, and Moldova it is also a worrying sign that Lithuanian radicals, with seeming affinity for Russia, from time to time put claims in social media arguing for Lithuania to regain the Suwalki triangle from Poland. While conflict between the two countries is highly unlikely, it is not out of the realm of possibility that ethnic tensions in Suwalki could be used to stir up local separatism, that radical calls could be made for the region’s incorporation into Kaliningrad (as pro-Russia radicals have suggested in the case of Lithuanian port city of Klaipeda), or that historic mistrust between Poland and Lithuania could impact the cooperation or perceptions of their populations (though less likely their governments and military that are bound by NATO agreements) in the face of a Russian attack.

In summary, the Suwalki Gap will remain a troublesome land strip for NATO due to the military build-up on its borders and Moscow’s ambitions in the post-Soviet space. This is further complicated by the historical and ethnic tensions of the region that still remain salient and could potentially be further enflamed. NATO would be wise to assess not only the military elements, but also these broader historical and cultural fault-lines in the region. Plans to launch a joint Polish, Lithuanian, and Ukrainian military brigade in 2017 will be a positive step in mitigating the regional risks and encouraging Warsaw and Vilnius to build mutual understanding to finally transcend the question of minorities and historical mistrust, but much could be done with the support of the United States and NATO.

Agnia Grigas is a non-resident Senior Fellow at the Dinu Patriciu Eurasia Center of the Atlantic Council. She is the author of Beyond Crimea: The New Russian Empire and The Politics of Energy and Memory between the Baltic States and Russia. Follow her @AgniaGrigas.

Image: The geo-strategic area around Suwalki, Poland has a rich and complex history (graphic: Google)