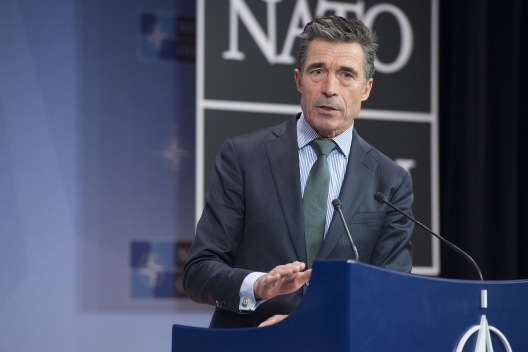 The crisis in Ukraine is calling into question the very principles upon which we have built the modern Europe.

Russia’s actions in Crimea are a violation of the territorial integrity and sovereignty of Ukraine. They undermine the rule of international law. And they flout the principle that every state is sovereign, and free to choose its own fate.

That is the principle which allowed us to heal the divisions imposed by tyranny after World War Two, and to move ever closer to a Europe which is whole, free and at peace.

This year we celebrate how much that principle has brought us – but the crisis in Ukraine is a reminder to us all that we must defend that principle. That is what NATO is doing.

2014 marks a number of significant anniversaries for the Euro-Atlantic family of nations. For NATO, it marks 15 years since the Czech Republic, Hungary and Poland joined the alliance; 10 years since the accession of Bulgaria, Estonia, Latvia, Lithuania, Romania, Slovakia and Slovenia joined; and five years since Albania and Croatia acceded.

This year also marks a decade since ten of those countries joined the European Union.

As Prime Minister of Denmark, I was at the NATO summit which agreed the 2004 enlargement. I chaired the EU summit in Copenhagen which agreed to the European Union’s enlargement. As Secretary General of NATO, I have had the privilege of working day by day with the new members of our Alliance.

In both capacities, I have seen first-hand the enormous benefits which the accession of new members to the two premier Euro-Atlantic organisations has brought.

At the same time, NATO benefited from their accession. The Alliance gained members who are strong and committed, who play a significant role in our operations and exercises, and who bring a wealth of diverse experience and insights to the table.

Moreover, Europe and the world benefited from their choice to join our organisations, because by their accession, they spread the space of freedom, democracy, security and stability ever further across this once-divided continent.

Their accession to NATO, and the EU, is one of the great success stories of our time. The peace and prosperity these accessions brought is the strongest vindication of our founding principle.

The task is not yet done. There are still countries which wish to join the Euro-Atlantic organisations.

NATO’s position is clear, and it is set out in Article 10 of our founding charter, the North Atlantic Treaty: any European state in a position to further the principles of the Alliance and to contribute to the security of the North Atlantic area can apply to join.

We stand by that principle. Right now, Bosnia-Herzegovina, the former Yugoslav Republic of Macedonia¹, Georgia and Montenegro all aspire to join the Alliance. They have made their sovereign choice.

Accession to NATO is a free choice, but it is not a free ride. As the members of the Alliance all know, it takes determined reforms, and years of work; but the rule is cast in granite: NATO’s door is open for those who are ready to do the hard work.

These countries are all working on the necessary reforms. NATO is supporting them. And once they have done all that is needed, we will take the necessary decisions.

Ukraine’s policy on Euro-Atlantic accession has changed over the past decade, but at every step, NATO has respected our partner’s choice. Our cooperation with Ukraine has grown steadily stronger as a result.

The Alliance’s policy of showing respect and supporting reform has been a clear win for peace and stability in Europe. It has made NATO stronger, it has made each country stronger, and it has given a strong motivation to the countries which want to accede to continue with their reforms.

This is the policy, and this is the principle, which has allowed the spread of peace and stability across Europe. It has allowed us to heal the divisions of the past, overcome conflicts which lasted generations, and build a community based on inclusiveness, democracy and cooperation.

The right of sovereign states to choose their own course is one of the foundation stones of modern Europe. That principle has stood us in good stead since the day NATO was founded. We must all stand by it today.