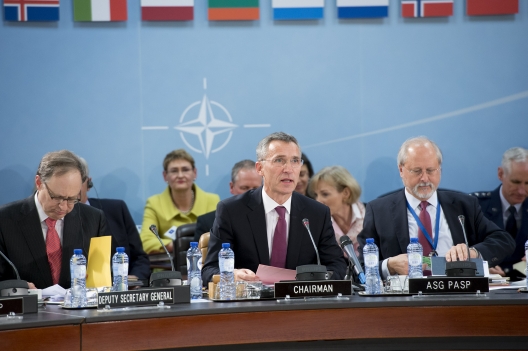 NATO will establish a prototype of a new rapid response force next year as it strives to improve its ability to deter a Russian attack, the alliance said on Tuesday.

Because of formidable operational and financial challenges, a permanent quick reaction force will not be established until 2016, the NATO secretary general, Jens Stoltenberg, said Tuesday during meetings here of the alliance’s foreign ministers. The interim force is intended as a temporary hedge against Russia’s more aggressive military posture.

“NATO hasn’t done this for two decades,” Douglas E. Lute, the United States ambassador to NATO, said on Monday. “What NATO faced in the last two decades was a different challenge. It faced a challenge on a very sort of deliberate, predictable calendar basis. . . .

“A senior NATO official, who declined to be identified because he was discussing internal planning, said that the interim force would be established by Jan. 1. It has not yet been decided whether the units that are to make up the force will be based in their home countries or kept at another location, the NATO official said.

But the readiness of the force would be raised so that an entire brigade of troops could be deployed within a few days. NATO officials, he said, are still discussing whether some lead elements of the brigade should be able to deploy more quickly.

The idea is that the quick response mission should be rotated among NATO nations. Individual nations will assume the additional cost of keeping the troops assigned to the force at a high level of preparedness. But there is discussion within NATO about establishing some sort of common fund to defray the cost.

President Vladimir V. Putin’s penchant for calling snap “exercises” and moving large numbers of Russian ground forces has made it vital for NATO to have a faster way to respond, the NATO official said. Russia used such exercises to mask its preparations for its intervention in Crimea. . . .

Unwilling to wait for NATO to act, Lithuania decided to forge ahead and create its own 2,500-member rapid-reaction force — it became active on Nov. 1 — that would try to hold off any outside incursion until NATO troops could mobilize and get there.