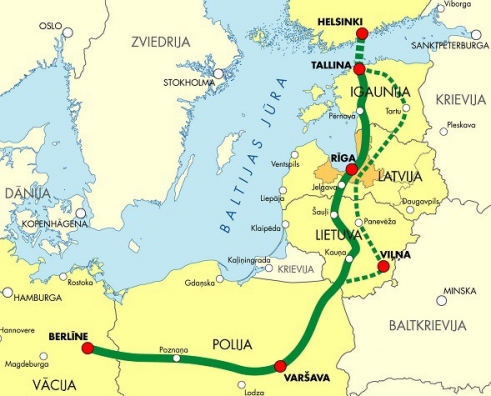 Earlier this month (October 2016), the governments of the Baltic States and Poland finally reached all the necessary political, financial and technical agreements to implement one of the most ambitious projects inside the European Union—linking Finland, the Baltic States and Poland with the unified Trans-European Transport Network (NRA, October 10). The agreed-upon project, which will also have important logistical implications for the North Atlantic Treaty Organization (NATO), envisions a continuous rail link from Tallinn (Estonia) to Warsaw (Poland), via Riga (Latvia) and Kaunas (Lithuania). The construction of this railway—known as “Rail Baltica”—is planned to start by 2020 and should be completed by 2030. The section from Helsinki to Tallinn will for now be operated by existing commercial ferries.

Altogether, the European Commission has allocated 442.2 million euros ($485 million) for the construction of Rail Baltica until 2020, or 81.83 percent of the project’s co-financing. The railway line will be built according to the 1,435-millimeter European standard gauge (LETA, April 30). This past summer, Michael Cramer, the chairman of the European Parliament’s Transport and Tourism Committee, emphasized the importance of this railway connection: “In 2003, I traveled by train from Berlin to Tallinn. This trip lasted 60 hours, and I had to transfer nine times. Before World War II, the same route could be accomplished within 27 hours. Thus, the Rail Baltica project is very important both ecologically, because trains are more environmentally friendly, and, of course, it is necessary to connect the Baltic States with the rest of Europe” (Lsm, August 28).

Last September, Latvian, Lithuanian, Estonian and Polish parliamentarians announced, that Rail Baltica would be the most important project for the Baltic States in the 21st century. This railway will be of crucial to the Baltics’ national security, regional economic growth, as well as the promotion of solidarity and good neighborly relations among these states. The Rail Baltica project had long been stalled by disagreements over how to share the value added tax (VAT) related to the project’s construction. In July, the Lithuanian, Latvian and Estonian ministers signed a preliminary agreement on the allocation of VAT (BNN, September 19). But the final agreement was not reached until early October….

A typical train can move up to 120 armored units—tanks, armored vehicles or other machines—in a single trip. It is possible to move even more equipment at a time by sea; but compared to rail, the time required for this transport is longer. While most NATO member states have railroads that use the standard 1,435 mm gauge, the Baltics still rely on the wider, Russian- and Soviet-built 1,520 mm rail lines. But even these are extremely limited in their density. When built, the new Rail Baltica line would thus allow the North Atlantic Alliance to move large volumes of military cargo from Germany and Poland to the Baltic States without interruption—saving time and limiting the numbers of personnel and transport equipment involved in the logistics. This railway, therefore, has the potential to become crucial to the Baltic States’ defense.