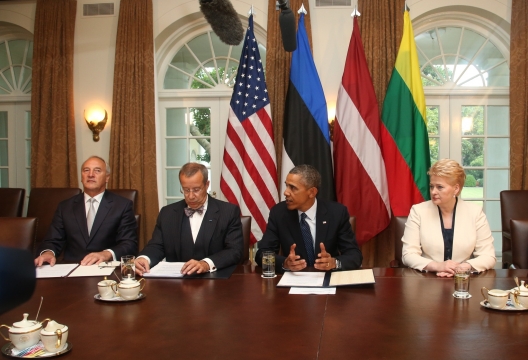 From the White House:  The President spoke separately with Prime Minister Cameron, President Hollande, and Prime Minister Renzi today about Ukraine. The President welcomed the strong, unified stance of the United States and the European Union regarding Russia’s military intervention in Ukraine, including in the conclusions of the March 6 European Council. The leaders reiterated their grave concern over Russia’s clear violation of international law and reaffirmed their support for Ukraine’s sovereignty and territorial integrity.

The President also spoke with President Berzins, President Grybauskaite, and President Ilves on a conference call today. The President reaffirmed the United States’ unwavering commitment to our collective defense commitments under the North Atlantic Treaty and our enduring support for the security and democracy of our Baltic allies. The Baltic leaders welcomed the provision of additional support to NATO’s Baltic Air Policing mission, and the leaders agreed to continue coordinating their efforts closely.

All of the leaders agreed on the need for Russia to pull its military forces back to their bases, allow for the deployment of international observers and human rights monitors to the Crimean peninsula, and agree quickly on the formation of a contact group that could lead to direct dialogue between Ukraine and Russia to de-escalate the situation and restore Ukraine’s sovereignty and territorial integrity. The leaders rejected the proposed referendum in Crimea as a violation of Ukraine’s constitution and underscored that all decisions about the future of Ukraine must include the government in Kyiv. The leaders made clear that Russia’s continued violation of international law will isolate it from the international community. They also discussed the need for the international community to provide strong support to the government of Ukraine as it works to stabilize its economy and prepares for elections in May. They agreed to continue close coordination, including through appropriate international organizations.

From the Office of the President of Lithuania:  President Dalia Grybauskaitė spoke on the phone with U.S. President Barack Obama about the security of the Baltic region and the situation in Ukraine. Taking part in the telephone conversation were also the Presidents of Latvia and Estonia, Andris Bērziņš and Toomas Hendrik Ilves.

President Grybauskaitė said that the ongoing developments in Ukraine posed a threat to the security and stability of the whole of Europe. It was therefore necessary to continue seeking ways to stop the escalation of the conflict as quickly as possible. The Presidents of the three Baltic countries and the United States underlined that the international community would never recognize the annexation of Crimea.

The four heads of state also stressed that if the situation in Crimea continued to deteriorate, a range of sanctions would be imposed on Russia.

President Grybauskaitė said that Russia’s actions in Ukraine were in violation of international law and the existing international agreements. Russia must withdraw its troops to the bases established by international accords, stop escalating the conflict and spreading disinformation.

President Grybauskaitė further said that to open a political dialogue and to attain a peaceful crisis resolution, international observers must get access to Crimea. Until this moment, no international mission has been allowed there.

President Barack Obama reaffirmed the strong commitment of the United States to defend the Baltic States under Article 5 of the North Atlantic Treaty.