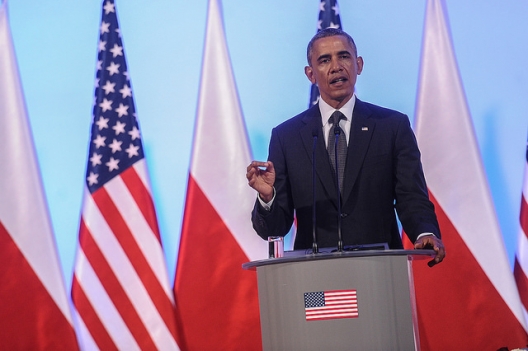 In Warsaw, Obama also announced a $1 billion “European Reassurance Initiative” to support regional partnerships and fund U.S. presence in the region. He called the fund “a powerful demonstration of America’s unshakeable commitment to our NATO allies.”

The new initiative is a “much-needed step of President Obama’s administration and an important commitment to the security and territorial integrity of Central Europe,” says Simona Kordosova of the Atlantic Council in an email to Trend Lines. The fund still requires approval from the U.S. Congress, however, and therefore “doesn’t provide any immediate, visible assistance for the region,” she says.

Kordosova adds that Poland continues to worry that even if the money comes through, it won’t be enough to deter further Russian aggression. Poland wants “more tangible reassurance measures to be put in place, such as a permanent ground presence of NATO troops,” she explains. . . .

One of the most high-profile projects in the works is a planned U.S. missile defense site in Poland, operated by the U.S. Navy, planned for deployment in 2018 to complement a planned site of the same type in Romania. The system is part of the Obama administration’s European Phased Adaptive Approach (EPAA) for missile defense, announced in 2009, which replaced the Bush administration’s plan to place a “third site” for missile defense in Eastern Europe to complement sites in Alaska and California.

Kordosova calls the planned missile defense site “one of the most tangible signs of U.S. commitment to the region.” She says that the United States should ensure that the EPAA, which has already been adjusted in response to technological and budgetary developments, moves forward as planned “regardless of external factors.”