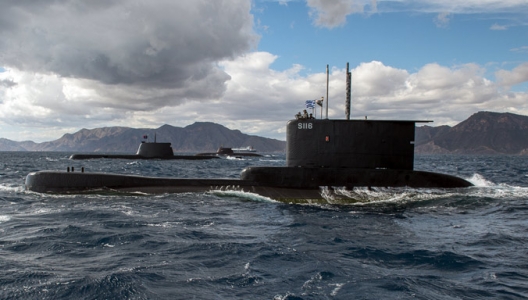 A large fleet of naval vessels is taking part in the multinational “Noble Justification” military exercise which is underway in the Mediterranean Sea and Atlantic Ocean. More than twenty warships, and several submarines and aircraft, are involved in the drills. “The exercise Noble Justification is a substantial opportunity for NATO to develop force integration, multinational inter-operability and enhance readiness, by using of an improved technology”, said NATO’s Maritime Commander, Vice Admiral Peter Hudson.

The aim of the event is to test the collective defence and crisis response capabilities of NATO’s Response Force. It will also test NATO naval forces to respond to crisis situations anywhere in the world, at short notice. More than five thousand military personnel are taking part from fourteen NATO nations: Belgium, Canada, France, Germany, Greece, Italy, the Netherlands, Norway, Poland, Portugal, Spain, Turkey, the United Kingdom and the United States. Two partner nations, Finland and Sweden, are also involved.

“It exercises a high-density, high-threat scenario in which NATO responds to a threat to its integrity, and the sovereignty, of its member states,” said Vice Admiral, Peter Hudson. The event is being directed from NATO’s Maritime Command at Northwood in the United Kingdom. The exercise is running from 13-26 October.

A wide variety of aircraft are participating, including U.S. B-52 bombers. Anti-submarine and electronic warfare units are also taking part.