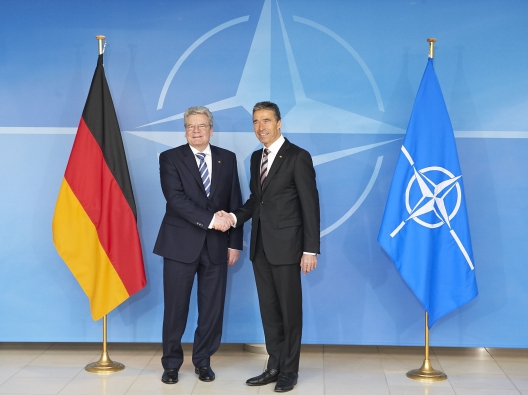 Germany is globalised more than most countries and thus benefits more than most from an open world order. A world order which allows Germany to reconcile interests with fundamental values. Germany derives its most important foreign policy goal in the 21st century from all of this: preserving this order and system and making them fit for the future. . . .

[W]e are entering a world in which individuals can buy a quantity of destructive power which was the preserve of states in earlier times. A world in which economic and political power is shifting and entire regions are arming themselves. In the Middle East, there is a danger that individual crises will converge and engulf the whole region. At this very moment, the world’s only superpower is reconsidering the scale and form of its global engagement. Europe, its partner, is busy navel-gazing. I don’t believe that Germany can simply carry on as before in the face of these developments.

For some time now, it’s been impossible to ignore the fact that this change is gradually gnawing away at German certainties. We’re committed to the European idea. However, Europe’s crisis has made us feel uncertain. We’re also committed to NATO. However, we’ve been debating for years about the direction the Alliance should take, and we’ve done nothing to stop the depletion of its financial resources. We’re not calling the alliance with the United States into question, but we have observed symptoms of stress and uncertainty about the future. We have great respect for the rules-based world of the United Nations. However, we can’t ignore the crisis in multilateralism. We’d like to see the new players on the world stage participate in the global order. However, some of them are seeking a place on the margins rather than at the heart of the system. We feel surrounded by friends, but hardly know how to deal with diffuse security threats such as the privatisation of power by terrorists and cyber criminals. We rightly complain when allies overstep the mark when they use electronic surveillance to detect threats. And yet, we prefer to remain reliant on them and hesitate to improve our own surveillance capacities. . . .

Let me ask a few leading questions. Are we doing what we can to stabilize our neighbourhood, both in the East and in Africa? Are we doing what we have to in order to counter the threat of terrorism? And, in cases where we have found convincing reasons to join our allies in taking even military action, are we willing to bear our fair share of the risks? Are we doing what we should to attract new and reinvigorated major powers to the cause of creating a just world order for tomorrow? Do we even evince the interest in some parts of the world which is their due, given their importance? What role do we want to play in the crises afflicting distant parts of the globe? Are we playing an active enough role in that field in which the Federal Republic of Germany has developed such expertise? I am speaking, of course, of conflict prevention. In my opinion, Germany should make a more substantial contribution, and it should make it earlier and more decisively if it is to be a good partner.

Germany has long since demonstrated that it acts in an internationally responsible way. But it could – building on its experience in safeguarding human rights and the rule of law – take more resolute steps to preserve and help shape the order based on the European Union, NATO and the United Nations. At the same time, Germany must also be ready to do more to guarantee the security that others have provided it with for decades. . . .

For it is crystal clear to me that we need NATO. And it is precisely at times when the United States cannot keep on providing more and more that Germany and its European partners must themselves assume greater responsibility for their security.

Furthermore, it should today be natural for Germany and its allies to not simply refuse to help others when human rights violations multiply and result in genocide, war crimes, ethnic cleansing or crimes against humanity. Not only do all Western democracies consider respect for human rights to be one of their defining features, it is also a cornerstone of any guarantee of security, of a peaceful and cooperative world order. . . .

So, will Germany reap “more trouble” if it plays a more active role? There are indeed commentators who think that a Germany that shows initiative will inevitably experience friction with its friends and neighbours. This assumption is, in my opinion, based on a misconception. “More responsibility” does not mean “more throwing our weight around”. Nor does it mean “more going it alone”! On the contrary, by cooperating with other countries, particularly within the European Union, Germany gains influence. Germany would in fact benefit from even more cooperation. Perhaps this could even lead to the establishment of a common European defense. In our interconnected world, there are problems that no country can solve on its own, however powerful it may be. The ability and willingness to cooperate are becoming the defining trademark of international politics. In line with this, responsibility is always shared responsibility.

As a globally plugged-in economy, Germany has no alternative but to find partners, be considerate and make compromises. Germany has long known that it must guard against going its own special way. A democracy must, of course, have the right to remain on the sidelines on occasion. But such a step should be well considered and should remain the exception. Going it alone has its price. . . .

I am most firmly convinced that a Germany which reaches out more to the world will be an even better friend and ally. It will also be a yet better partner within Europe. . . .

The Federal Republic of Germany has lived in peace with all its neighbours for more than six decades. Civil and human rights have been upheld for six decades. The rule of law has prevailed for six decades. Prosperity and internal security are among the country’s defining features. Germany is home to a vibrant civil society which identifies errors and can help to correct them.

In the past, when the Germans put their country above everything, “über alles”, as the national anthem proclaimed, a form of nationalism evolved that progressed through all the phases of an unenlightened sense of national identity, from forced self-assurance to self-delusion to hubris. Our affirmation of our nation today is based on all the things that make this country credible and trustworthy – including its commitment to cooperation with our European and North Atlantic friends. We should not trust in ourselves because we are the German nation, but because we are this German nation.

Let us thus not turn a blind eye, not run from threats, but instead stand firm, not forget, neglect or betray universal values, but instead uphold these values together with our friends and partners. Let us be seen to be living by them, let us defend them.

Excerpts from “Germany’s role in the world: Reflections on responsibility, norms and alliances” speech by Federal President Joachim Gauck at the opening of the Munich Security Conference, January 31, 2014.