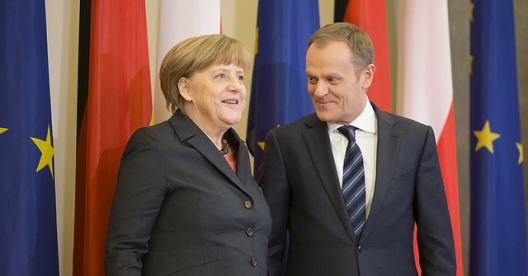 To the east Russia is on the march. After a spike in violence over the weekend in eastern Ukraine, the Kremlin on Monday cut gas exports to the country, using an economic cudgel to go with the military one. The bad-case scenarios there are 1990s Yugoslavia, a revived proto-Soviet empire, or both.

Yet the bigger surprise of March’s Crimea crisis came from the west with Berlin’s muted response to Russian aggression, and its rejection of Warsaw’s calls for a stronger NATO response.

The German language has a new phrase for the political and business establishment’s attitude: Russlandversteher, or “understanding Russia.” Over half of Germans claim to “understand” Vladimir Putin’s annexation of Crimea and the bloody conflict it is fomenting in Ukraine—in part blaming America’s support for Kiev’s democrats for provoking the Kremlin. . . .

Further west, the continent’s divisions get amplified. The French are moving ahead with the $1.6 billion sale of two Mistral naval assault vessels to Russia later this year over the objections of Washington and the newer NATO allies in Poland and the Baltic states. Britain has sold the City of London along with its soul for a pot of dirty Russian money.

To Poland’s south are wet friends within the so-called Visegrad Group, founded in 1991. The Russian attack on Ukraine has effectively killed this club of four Central European countries.

As the Poles pressed for permanent NATO (preferably U.S.) military bases in Central Europe, Czech Defense Minister Martin Stropinsky last month invoked the 1968 Soviet invasion of Czechoslovakia to explain his opposition. After President Obama in Warsaw this month called for rotations of American military units through the region, Slovak Prime Minister Robert Fico, whose country relies on Russia for 100% of its natural gas, ruled out Slovakia’s participation. Picking up on the Czech’s morally and historically daft comparison between NATO and the Warsaw Pact, he said, “Slovakia has its historical experience with participation of foreign troops.” As Hungary turns nationalistic and authoritarian under Prime Minister Viktor Orban, it’s also in the camp of understanding Putin. Poland’s one solid eastern EU ally is Estonia, population 1.3 million.

Mr. Kaminski is a member of the Journal’s editorial board.