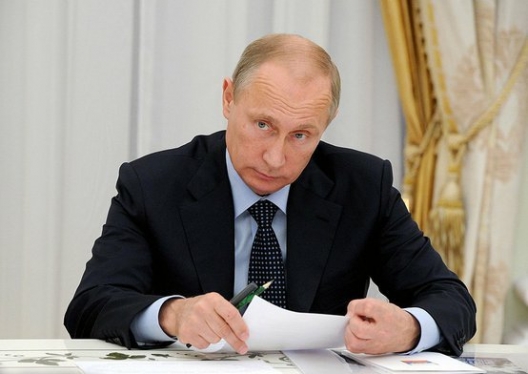 From Vladimir Isachenkov, AP:  Russia identified NATO as the nation’s No. 1 military threat and raised the possibility of a broader use of precision conventional weapons to deter foreign aggression under a new military doctrine signed by President Vladimir Putin on Friday [Dec. 26, 2014]. . . .

The new doctrine, which comes amid tensions over Ukraine, reflected the Kremlin’s readiness to take a stronger posture in response to what it sees as the U.S.-led efforts to isolate and weaken Russia.

The paper maintains the provisions of the previous, 2010 edition of the military doctrine regarding the use of nuclear weapons.

It says Russia could use nuclear weapons in retaliation to the use of nuclear or other weapons of mass destruction against the country or its allies, and also in the case of aggression involving conventional weapons that “threatens the very existence” of the Russian state.

But for the first time, the new doctrine says Russia could use precision weapons “as part of strategic deterrent measures,” without spelling out when and how Moscow could resort to them.

Among other provisions, the paper mentions the need to protect Russia’s interests in the Arctic, where the global competition for vast oil and rich resources has been heating up as the Arctic ice melts. . . .

Earlier this month, Russia flexed its muscle by airlifting the state-of-the art Iskander missiles to its westernmost Kaliningrad exclave bordering NATO members Poland and Lithuania. The missiles were pulled back to their home base after the drills, but the deployment clearly served as a demonstration of the military’s readiness to quickly raise the ante in case of crisis.

Russia has threatened earlier that it could permanently station the Iskander missiles, which can hit targets up to 480 kilometers (about 300 miles) away with high precision, in retaliation to U.S.-led NATO missile defense plans. . . .

The 29-page doctrine is a stand-alone document outlining top threats to Russia’s security and possible responses. The current edition is the third since Putin was first elected in 2000.

From Reuters:  Moscow’s previous military doctrine, signed by Putin in 2010, also identified NATO expansion as a top risk to Russia, but the stakes have risen sharply over the past year.

Russia said this week NATO was turning Ukraine into a “frontline of confrontation” and threatened to sever remaining ties if Ukraine’s hopes of joining NATO were realized.