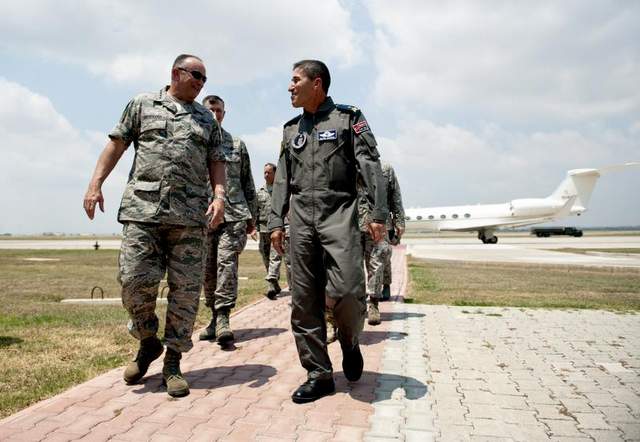 Q. How have this year’s budget cuts affected readiness in Europe?

A. All of these budget uncertainties have had a significant impact on EUCOM. We grounded two and a half [Air Force] fighter squadrons, had to stand them down. Just recently, we have started reflying them, but we lost currency in aviators, we missed maintenance … and it will take us time to recover. For our Army units, most of them are either recently returning from or just getting spun up for [Afghanistan] rotations, so there are less impacts on the readiness of our Army units. For the Navy … steaming time and flying hours were reduced by 22 percent for deployers in our area, so a lot of missed engagement with European nations.

Q. How have the budget cuts affected the U.S. partnership with NATO?

A. What we did have to cut are those mil-to-mil training events where we’re training our partners to go downrange so that we don’t have to, a 45 percent cancellation in those kinds of training events for our Army units. … From 2007 to 2011, EUCOM units trained a little over 40,000 partners and NATO soldiers to go downrange — that means 40,000 Americans didn’t have to go downrange. What we have seen in our Army is a degradation in our ability to do those mil-to-mil events and do the training that allows those units to stand the watch downrange.

Q. Fewer of today’s troops are deploying and living in Europe. Are you concerned that the NATO alliance may suffer because the next generation may not have the same personal and cultural connection with NATO partner countries?

A. It is absolutely a concern. … We will have a generation of officers who have not served here as we did in the past, haven’t made the personal connections to the leadership … and will not be able to pick up the phone and call a familiar face to solve those tougher problems, which you know we always solve in personal format. … [The Europeans] will continue to be the allies of choice in the future. These are the most capable nations in the world to fight alongside of, and it does concern me that we would lose contact.