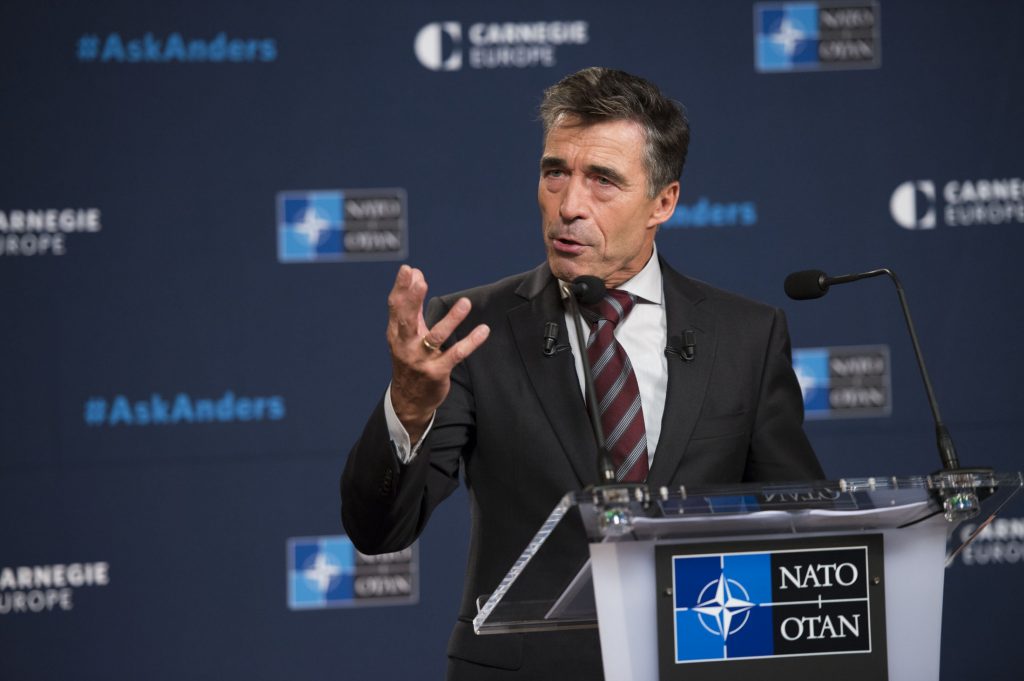 We live in a world in transition. And transition often leads to turmoil and turbulence. In such times, we need something strong. Stable. And secure. For 28 nations in Europe and North America, that pillar of strength is NATO. We are seeing tragic turmoil and turbulence just beyond NATO’s south eastern border. We have also recently seen renewed efforts by the international community to stop the terrible bloodshed in Syria. . . .

[E]very crisis around the world is different. And NATO cannot be the response for every crisis. But I do believe that NATO is the foundation on which any Ally or group of Allies can build their response to any crisis. Our political consultations. Our common standards and procedures. Our military command and control structures. And our common experiences in combat and in peace-keeping on three continents. All these make NATO unique. They mean that Allied nations stand ready to act. And that when they act, they can be more effective.

Today, in many parts of the world, Allies are acting under NATO’s command and control –often with partner nations. To safeguard security at home. And to help bring stability and safety to troubled areas of the world. In Afghanistan and Kosovo. In the Mediterranean and off the Horn of Africa. Over the Baltic states and near Turkey’s border.

This clearly demonstrates that NATO remains an essential source of stability in an unpredictable world. . . .

I cannot predict today what NATO’s next mission will be. But whatever the next challenge is, we need to remain ready to face it. To do that, I see three priorities.

Collective defence and deterrence is the greatest responsibility of our Alliance. And it will always be a transatlantic task. Because the security of Europe and the security of North America are indivisible.

The nature of collective defence is not the same as it was when NATO was founded in 1949. The threats are not the same, and neither are the means to address them.

It is no longer sufficient to line up tanks along our borders to patrol and protect them. Today’s threats – and tomorrow’s – often come from the other side of the world, even from cyber space. And they come in many forms and guises. . . .

[W]e saw in Estonia in 2007 how cyber attacks can harm our economies and our security. We have made good progress in improving our cyber defences. For me, the next step should be to consider how we could assist Allies who come under cyber attack. I believe this, too, is modern collective defence. . . .

Our second priority is to strengthen the transatlantic relationship and rebalance the Alliance.

North America and Europe remain each other’s partner of choice. And we can only be fully effective by working together.

I would like to see European Allies playing their part to acquire more drones to improve surveillance. More large transport and air-to-air refuelling aircraft to enhance their ability to deploy on operations. And more upgraded radars on their ships so they can be integrated into our NATO missile defence.

Finally, a strong Europe will require strong political will. To increase defence spending when our economies start to recover, as they will. To develop long-term procurement and investment programmes. And to assume more security responsibilities in Europe’s neighbourhood. . . .

Finally, our third priority is to develop a truly global perspective of security, and the partnerships to match that perspective. . . .

NATO’s unique expertise and experience means we are particularly well suited to helping countries manage difficult political transitions. Modernise their security sectors. Train their forces to deal with internal challenges. And assist them in operating together with their neighbours’ forces to manage crises together. Projecting stability without the need to project forces. That is good for our partners. And it’s good for our Allies too. . . .

I would also like to see NATO further develop co-operative relations with regional organizations – such as the Arab League, the Gulf Cooperation Council and the African Union. To contribute to regional security including, if they so wish, by developing their capacities to manage future crises.

All these steps will not lead to NATO becoming a global policeman. But they will lead to a better global understanding by NATO. And this is essential for NATO to be ready to deal with the security challenges of today’s globalised world.