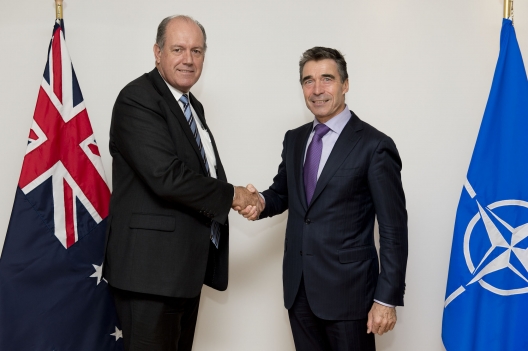 Australia’s participation in Afghanistan under the NATO banner is viewed with tremendous pride by Australians and profound respect by NATO members whose forces fought alongside them. Indeed, Australian Defense Forces have proven themselves tactically sound while Canberra has remained strategically and politically steadfast. Australia continues to demonstrate its commitment to a secure and stable Afghanistan through political and military agreements to play a role in Operation RESOLUTE SUPPORT.

The war in Afghanistan has undoubtedly accelerated the Australia-NATO partnership as evidenced by the establishment of an ambassador to Brussels, frequent military exchanges, increased dialog on national security matters, and improved information sharing. Nevertheless, Australia sees challenges to maintaining its current level of inclusion and participation in NATO strategy development. These concerns appear even more tangible as NATO’s European members return their focus to their own region and Australia looks increasingly toward developments in the Asia-Pacific.

Australia’s prosperity and primary security challenges remain anchored in Asia and its ability to prevent and deter attacks on Australia and its national interests remain the cornerstone of its strategy. Focused on capabilities rather than a specific threat, Australia’s military must deliver a defense force that can protect Australia from direct attacks and secure and advance its interests. Specifically, the security of trade routes and prevention of non-geographic threats such as those from cyberspace, terrorism, transnational crime, human trafficking, and illegal fishing are of greatest importance. Due to the scope of these challenges, Canberra’s partnerships with NATO and regional partners are essential to Australia’s security and prosperity.

Australia welcomes a greater NATO role in the Asia-Pacific and aspires to participate in strategic dialog akin to its involvement vis-à-vis Afghanistan. As one of four Pacific NATO partners, Australia can provide unique insights into the region, as well as political and military capabilities enhancing NATO planning and operations. Canberra’s modernization in the air and maritime domains with the recent acquisition of F/A-18s, F-35s, CH-47s, E3 AWACS, AGEIS radar equipped ships, and installation of advanced ground-based radars – all of which are easily integrated into NATO command and control systems – signify Australia’s commitment to NATO and demonstrate its desire for the Alliance’s involvement in the region.

Canberra recognizes, however, that NATO must first address the immediate challenges in its east, but cautions against becoming strategically ambivalent in the Asia-Pacific. The rise of China and the US pivot toward Asia offer Europe and NATO strong incentives to develop a security strategy for the Asia Pacific as the eastward shift of economic and political influence continues toward the region. Global economic interdependence suggests the shifting balance of power in Asia affects European economic security and as trade with Asian countries becomes of greater value, stability in the Asia Pacific region is increasingly in Europe’s interest. Of particular interest are Europe’s increased military sales within the region which provide European governments a channel to discuss security issues with their Asian counterparts. Australia welcomes this potential and wishes to be part of the planning and discussion.

Australia seeks to use its continued partnership in Afghanistan as the foundation to potentially expand the dialog not only to include Canberra’s support to NATO efforts in the greater Middle East, but also for the Alliance’s activities in the Asia-Pacific. In fact, as a first step demonstrating Australia’s willingness to partner with NATO outside Afghanistan, Prime Minister Tony Abbott committed military cargo aircraft to support humanitarian operations in northern Iraq while hinting at the possibility of expanding operations, if necessary.

NATO Secretary General Anders Fogh Rasmussen recently visited all of NATO’s Pacific partners and remarked how he was struck by the Australians’ knowledge of NATO and their enthusiasm to do more with the Alliance. The upcoming NATO Summit presents an opportunity to capitalize on this ground swell and solidify a long-term partnership between the Alliance and Australia. Specifically, Australia welcomes discussion and development regarding two of Canberra’s top priorities – cyber defense and space – in helping Australia improve and better integrate its emerging cyber security and satellite development programs. Expanding intelligence sharing, such as addressing the jihadist threat from regional extremists returning from Iraq and Syria, is of increasing importance. Operationally, Australia and NATO would also benefit from deepening planning, training, and integration for anti-piracy and disaster relief operations.

Canberra and the Alliance should seek to establish mechanisms to deepen integration through greater Australian contribution of staff in NATO commands, such as the SOF and maritime headquarters, but also consider an Australian leadership role in Alliance counter-piracy missions. Beyond participating in NATO operations, of which Australia is a credible and willing nation, Canberra should be viewed a partner in planning and one who should be consulted rather than simply informed.

Recognizing the Alliance’s current challenges, and urging caution in expanding in either members or regions, Australia neither expects or desires significant changes in NATO’s commitment to the Asia-Pacific in the near- to mid-term. Instead, individual NATO members who possess shared economic and security interests in the region might seek to partner with Australia through bilateral or multilateral approaches toward common goals.

Commander Chris Musselman is the US Navy senior fellow in the Brent Scowcroft Center on International Security at the Atlantic Council.