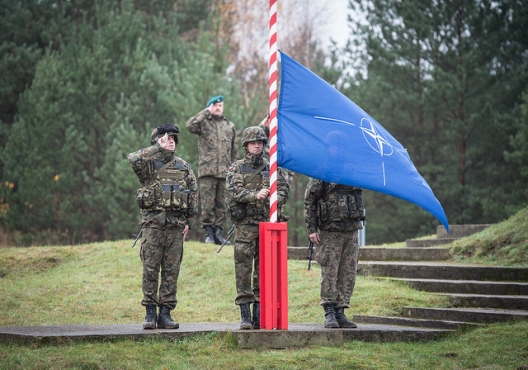 According to the German magazine Spiegel, NATO is examining scenarios in the event of a Russian military move in Eastern Europe. Alarm bells are already ringing in eastern states, and NATO is keen to show it could cope.

The article, which appeared in Spiegel’s online edition in German on Sunday, cites an internal North Atlantic Treaty Organization (NATO) draft document pertaining to discussions occurring within the military alliance and among individual members about possible scenarios if Russia were to launch a military campaign in Eastern Europe.

The draft document arrives at the conclusion that Russia’s ability to “execute a significant military action without much warning poses a wide-reaching threat for maintaining safety and stability in the Euro-Atlantic zone. . . .”

According to information obtained by Spiegel, however, NATO would have a difficult time defending against a potential Russian incursion under Article 5 of the North Atlantic Treaty. . . .

“When Baltic states joined NATO, there wasn’t a military threat from Russia,” German EU parliamentarian Elmar Brok, a long-time veteran of EU foreign affairs, told Spiegel. “The alliance stuck to the agreement with Russia and didn’t station any troops east of the Elbe. Now that it appears [Russian President Vladimir] Putin’s policies have changed, NATO has to find an answer.”

Polish Foreign Minister Radoslaw Sikorski told Spiegel that it was time for NATO to repeat what it had done in Western European nations in countries like his.

“There are bases in Great Britain, Spain, Germany, Italy and Turkey. But there aren’t any bases where they are actually needed,” he said.