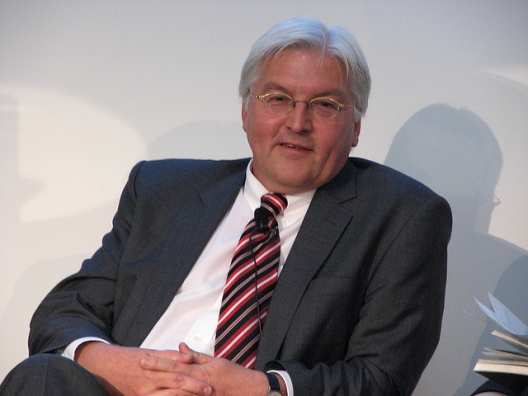 [I]t is abundantly clear from the Review that our partners expect a more active – and even more robust – German foreign policy in the future. Expectations are high – perhaps too high at times. So it is up to Germany’s people to answer the difficult questions: Where do our interests lie? How far do our responsibilities extend? What, in short, is the “DNA” of German foreign policy?

The basic tenets of Germany’s foreign policy – close partnership with France within a united Europe and a strong transatlantic alliance in terms of both security and economic cooperation – have withstood the test of time, and will remain a cornerstone of our approach….

In confronting crises, German foreign policy must strengthen its focus on reconciliation, mediation, and prevention – or risk being left with no other option but damage control. Germany is willing to do more in this area internationally. We want to act sooner, more decisively, and in a more substantial manner – not just when crises become acute, but also by focusing on conflict prevention and post-conflict management. This requires that we hone our tools and develop new ones, ranging from early-warning mechanisms to enhanced means of international cooperation….

Above all, we must prevent a strategic dilemma in which Germany felt forced to decide between its competitiveness in a globalized world and European integration. Europe should benefit from Germany’s strength, just as we benefit from Europe’s. As Europe’s largest economy, we must invest in integration. That is the source of our strength.At the same time, we must withstand the temptations that come with Germany’s current stature. In very different ways, the US, Russia, and China are offering Germany a privileged relationship….

We have no reason to shrink from these challenges. Even under the pressures of a globalized world, democratic systems that champion the rule of law are more resilient than the illiberal regimes that many – including some in Europe – are praising nowadays. But this does not mean that we can defuse any crisis by means of preventive action or clever intervention. Now more than ever, understanding the limits of one’s capabilities is an essential part of a viable foreign policy.

This does not mean embracing moral relativism. Our foreign policy must retain its hopefulness and ability to act responsibly. Yet holding firm to our moral precepts must go hand in hand with a realistic assessment of constraints. Germany’s global inter-connectedness, which has long been vital for our prosperity and security, does not allow us to pretend that we are either an island or a world historical force.