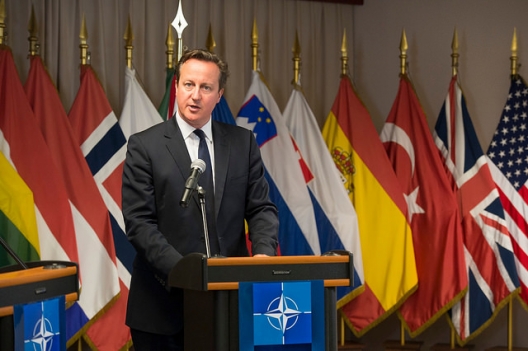 With less than 6 weeks to go until the NATO Summit I wanted to write to you personally to set out what I hope we can achieve, building on the ideas already put forward by Secretary-General Rasmussen.

This will be the first NATO Summit in the United Kingdom since Margaret Thatcher hosted the London Summit in 1990, just as the Cold War was ending. That summit proved a turning point for the alliance as leaders charted a new course for NATO and for a Europe “whole, free and at peace”.

In 2014, the world is more unpredictable than ever and we meet at another pivotal moment in the history of the alliance. In Afghanistan, our combat mission is coming to an end. To the East, Russia has ripped up the rulebook with its illegal annexation of Crimea and aggressive destabilisation of Ukraine. To the South, an arc of instability spreads from North Africa and the Sahel, to Syria, Iraq and the wider Middle East. So we must use the summit to agree how NATO should adapt to respond to and deter such threats; and to ensure the continued collective defence of all its members. We should have 5 goals.

First, 6 months into the Russia-Ukraine crisis we must agree on long-term measures to strengthen our ability to respond quickly to any threat, to reassure those allies who fear for their own country’s security and to deter any Russian aggression. All NATO allies have already contributed to the alliance’s response to this crisis and we should agree how we can sustain a robust presence in Eastern Europe, consistent with the NATO Russia Founding Act, to make clear to Russia that neither NATO nor its members will be intimidated. We should agree specific actions including: a new exercise schedule adapted to the new security environment; the necessary infrastructure; pre-positioning of equipment and supplies; and an enhanced NATO Response Force. This should be part of a broader action plan that enables us to respond more quickly to any threat against any member of the alliance, including when we have little warning.

We must also review our long term relationship with Russia. While NATO has only ever sought to be a partner to Russia, not a threat, it is clear that Russia views NATO as an adversary. We must accept that the co-operation of recent years is not currently possible because of Russia’s own illegal actions in NATO’s neighbourhood and revisit the principles that guide our relationship with Russia.

Second, as the ISAF mission in Afghanistan draws to an end, we must consider how to support the Afghan government in the years ahead, ensuring they maintain the progress we have made together and stop the country from once again becoming a safe haven for terrorists. We should review plans for NATO’s new mission to train, advise and assist the Afghan security forces from the start of next year. And we should discuss the future financial sustainment of the Afghan troops as we work towards the long-term goal of Afghanistan being able to sustain its own forces.

Third, we must agree how NATO will address the risks and challenges from an unstable world of failed states, regional conflicts, terrorism and cyber-attacks. We must ensure that NATO has the capabilities it needs to respond to changing threats. That requires investment. The UK is already one of 4 members of the alliance to meet the target of spending 2% of our GDP on defence and I would urge other allies to make the strongest possible commitment to increase their defence spending, and to devote at least one fifth of it to equipment and research. As our economies start to recover, reversing the decline in defence spending and investing in our defence capabilities would strengthen alliance cohesion and signal that NATO means business.

While we invest in our forces at home, we should also do more to provide practical support to other countries that need to strengthen their own security. We have learnt in Afghanistan the benefit of supporting a country to build up its forces so that they are better able to protect their own region. In Wales, I would like us to agree on new defence capacity building missions to other parts of the world, for example Georgia or the Middle East.

Fourth, as the world’s broadest security network with partnerships with over 40 countries and organisations on 5 continents, we should demonstrate a clear commitment to working with others who share our values and to maintaining an international rules-based order that promotes freedom, democracy and the rule of law. I support the proposed interoperability initiative with 24 of our partners to sustain these skills and relationships and I would like our defence ministers to meet with a smaller group to discuss enhanced opportunities for working together.

Fifth, and finally, we should recognise the sacrifices made by our armed forces. In the UK, we have enshrined an Armed Forces Covenant in law to ensure that our armed forces get the respect and support they deserve. Building on this, I would like the alliance to establish a new charter that makes clear our shared commitment to our armed forces. This is a personal priority for me – a “North Atlantic Armed Forces Charter”, signed by us all, would underline our commitment to treating our armed forces and their families fairly and providing them with the necessary support and care when they retire or are wounded or killed. We should also agree to share more systematically our best practice in this area, starting with the provision of medical care and support for injured service personnel and bereaved families.

These are ambitious priorities. Our foreign and defence ministers made good progress at their meetings in June. Our technical experts will continue this work in the coming weeks. But in Wales in September we must find the political will and decisive leadership required to overcome the remaining stumbling blocks.

At the London Summit in 1990, leaders agreed that “we need to keep standing together, to extend the long peace we have enjoyed these past 4 decades”. That remains just as true today. By working together we will be stronger together. The Wales Summit should prove that NATO is a rock solid alliance with strong partnerships around the world that fosters global peace and stability, creating a secure environment for economies to grow. It is an alliance that reassures our 900 million citizens that together we can protect them from the changing and multiplying threats of an unpredictable world.