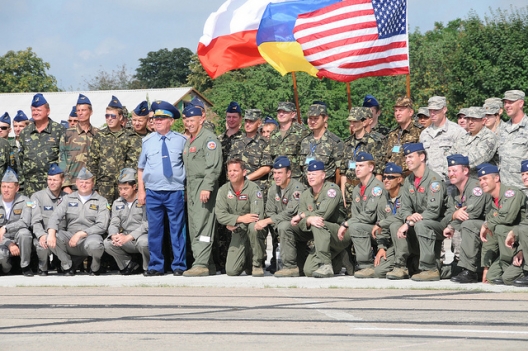 Atlas Vision is canceled. But Rapid Trident is still a go.

The status of two annual U.S. Army Europe military exercises that were scheduled for July — one in Russia, one in western Ukraine — is being affected differently by the situation in Ukraine, which has been described as the worst crisis since the end of the Cold War. The fact that the U.S. and its allies chose to go ahead with an exercise in Ukraine while canceling the one in Russia demonstrates Western support for Kiev in its confrontation with Moscow. . . .

That exercise, in Lviv, near the Polish border, is to “promote regional stability and security, strengthen partnership capacity, and foster trust while improving interoperability between USAREUR, the land forces of Ukraine, and other (NATO and partner) nations,” according to the USAEUR website.

In addition to USAREUR troops, Rapid Trident 2014 will include units from Armenia, Azerbaijan, Bulgaria, Canada, Georgia, Germany, Moldova, Poland, Romania, the United Kingdom and Ukraine, Westover said. It will feature a combined U.S. and Ukrainian battalion headquarters practicing a peacekeeping operation, he said. “Exercise planning will continue until we are told otherwise.”