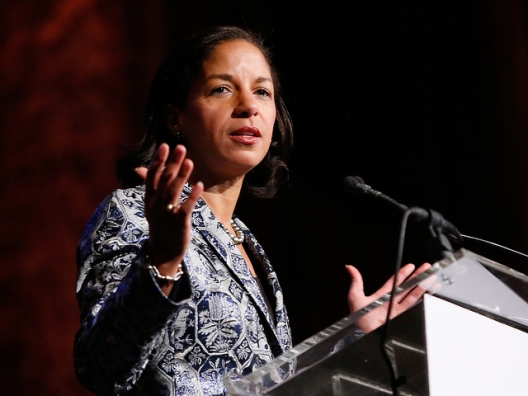 Collective action has long been the hallmark of effective American leadership. The United Nations, NATO and our Asian alliances were all built on the foundation of American strength and American values. American leadership established the Bretton Woods system and supported open markets, spurring a rapid rise in global living standards. Nor is this approach the province of one political party. It was President Reagan who negotiated the Montreal Protocol, hailed today as our most successful international environmental treaty. President George H.W. Bush insisted on UN backing and assembled a broad coalition before sending American troops into the Gulf. And, President Clinton led the campaign to enlarge NATO, opening Europe’s door to the very nations who, as Secretary Albright put it, “knocked the teeth out of totalitarianism in Europe.” Our history is rich with successes won not as a lone nation, but as the leader of many.

Now, our approach must meet the new demands of a complex and rapidly changing world. The architecture that we built in the 20th century must be re-energized to deal with the challenges of the 21st. With emerging powers, we must be able to collaborate where our interests converge but define our differences and defend our interests where they diverge. Our coalitions may be more fluid than in the past, but the basics haven’t changed. When we spur collective action, we deliver outcomes that are more legitimate, more sustainable, and less costly.

As global challenges arise, we turn first, always, to our traditional allies. When Russia trampled long-established principles of sovereignty, territorial integrity, and international law with its illegal annexation of Crimea, the United States rallied the international community to isolate Russia and impose costs. With American leadership, the world condemned the seizure of Crimea through an overwhelming vote in the UN General Assembly. We expelled Russia from the G8. Last week, the G7 met for the first time in 17 years, and we continued to concert our approach to Ukraine and other pressing global challenges. We’ve reinforced the unity of our NATO Alliance and bolstered our commitment to Article 5. President Obama has pledged to invest an additional $1 billion to bolster the security of our Eastern European allies against threats or intimidation. More U.S. Army and Air Force units are now deployed to Central and Eastern Europe, more American ships patrol the Black Sea, more American planes police the Baltic skies. And, meanwhile, with the support of the international community, Ukrainians have the chance to write a new chapter in their history.

By working in lockstep with the EU and other partners, we imposed sanctions that are biting the Russian economy. The IMF, the World Bank and private sector estimates all suggest that $100-200 billion in capital will flow out of Russia this year, as investors move their money to more reliable markets. Russia’s economy contracted in the first quarter, and the IMF has declared that the country is likely in recession. Its credit now rates just above junk status. Russia has lost standing, influence, and economic clout by the day. With our closest partners—Europe, the G7 and other key allies —we continue to send a common message: Russia must cease aggression against Ukraine, halt support for violent separatists in the East, seal the border, and recognize the newly elected Ukrainian government. If Russia does not, it faces the very real prospect of greater pressure and significant additional sanctions.

The speed and unity of our response demonstrates the unique value of America’s leadership. Unilateral sanctions would not have had the same bite as coordinated efforts with the EU. American condemnations alone do not carry the same weight as the UN General Assembly. Bilateral U.S. assistance to Ukraine could not match the roughly $15 billion IMF program. And, for our Eastern allies, American security guarantees are most powerful when augmented by NATO’s security umbrella.

The United States’ commitment to the security of our allies is sacrosanct and always backed by the full weight of our military might. At the same time, we expect our partners to shoulder their share of the burden of our collective security. Collective action doesn’t mean the United States puts skin in the game while others stand on the sidelines cheering. Alliances are a two-way street, especially in hard times when alliances matter most.

As we approach the NATO summit in Wales this September, we expect every ally to pull its full weight through increased investment in defense and upgrading our Alliance for the future. Europe needs to take defense spending seriously and meet NATO’s benchmark—at least two percent of GDP—to keep our alliance strong and dynamic. And, just as we reassure allies in the face of Russia’s actions, we must upgrade NATO’s ability to meet challenges to its south—including by reinforcing the President’s commitment to build the capacity of our counterterrorism partners.