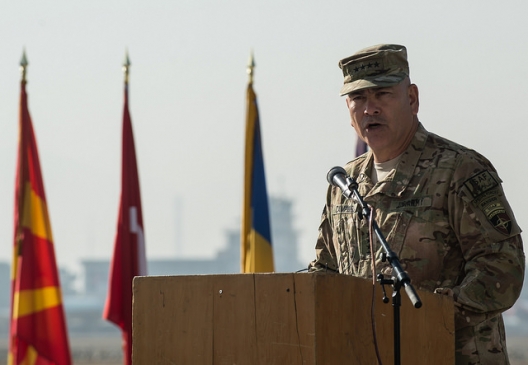 The U.S. and NATO closed their combat command in Afghanistan on Monday, more than 13 years after invading the country in the wake of the Sept. 11 terror attacks to target al-Qaida and Osama bin Laden. . . .

As NATO’s International Security Assistance Force’s Joint Command, which was in charge of combat operations, lowered its flag Monday and formally ended its deployment, resurgent Taliban militants launched yet another bloody attack in the country. And with President Barack Obama allowing American troops to go after both al-Qaida and Taliban militants in the country into the next year, the fighting likely won’t be over anytime soon.

“I don’t think the war will slow or stop during the winter, as attacks on cities are not contingent on the weather,” Afghan political analyst Wahid Muzhdah said. “I believe attacks in the cities will increase — they attract media attention.”

Monday’s ceremony saw the NATO flag of the command folded and put away amid the foreign troop withdrawal. From Jan. 1, the coalition will maintain a force of 13,000 troops in Afghanistan, down from a peak around 140,000 in 2011. As of Dec. 1, there were some 13, 300 NATO troops in the country.

U.S. Gen. John F. Campbell, commander of NATO and U.S. forces, said foreign troops now will focus on training and supporting local Afghan forces, which have led the fight against the Taliban insurgents since mid-2013.

“The Afghan security forces are capable,” Campbell told The Associated Press. “They have to make some changes in the leadership which they’re doing, and they have to hold people accountable. . . .”

Obama recently allowed American forces to launch operations against both Taliban and al-Qaida militants, broadening the mission of the U.S. forces that will remain in the country. They also will be permitted to provide combat and air support as necessary, while Afghan President Ashraf Ghani also considers resuming controversial night raids that could see Americans take part.

Up to 10,800 U.S. troops will remain in Afghanistan for the first three months of next year, 1,000 more than previously planned, said a NATO official who spoke on condition of anonymity to discuss troop deployments. As a result, there will be little, if any, net drop in U.S. troop numbers between now and Dec. 31, when the international combat mission formally ends.