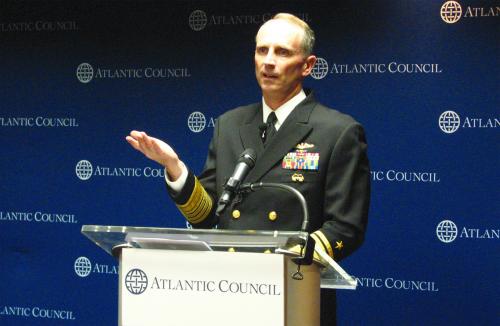 From Christopher P. Cavas, Defense News:  Preparations are continuing to base four U.S. Navy destroyers in Rota, Spain, beginning in fiscal 2014 — a move that will allow the ships to provide a near-continuous ballistic-missile defense (BMD) shield for Europe.

And while the U.S. remains the only nation so far able to field a sea-based BMD system, the nation’s top naval officer sees roles other navies can play to support the mission.

“Many of the allies that have that anti-air warfare capability are interested in seeing what can be done,” Adm. Jonathan Greenert, chief of naval operations (CNO), said in an Oct. 31 interview. “Each has their own boxes and political dynamics. But there is a renewed interest in seeing how can we help you with ballistic-missile defense.”

Greenert met with many of his European counterparts in mid-October during a regional seapower symposium in Venice, Italy. BMD was one of many topics discussed during the meetings.

The CNO noted that Aegis destroyers operating in a missile defense mode aren’t as effective in the anti-air role, forcing the need for an escort to protect the BMD shooter. European navies operate a number of destroyers and frigates that are capable in that area.

“If they have that capability, they’re saying, ‘Maybe we can do that,’” Greenert said. “So there’s an interest in finding what that would mean. What would those [concepts of operations] be? What would the command-and-control structure be?”