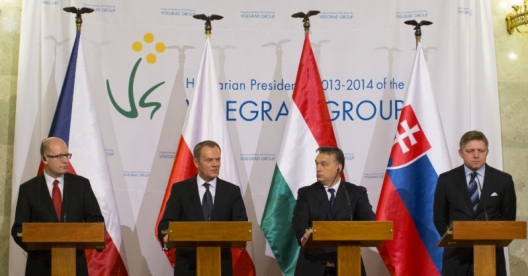 We, the Prime Ministers of the Czech Republic, Hungary, Poland and Slovakia, recognize that current security trends in Europe call for even closer regional defence cooperation and multinational programs deeply rooted in NATO and EU policies. The Visegrád Cooperation continues to serve as a platform for coordination of our countries in all European and transatlantic security policy fora.

In our statement in October 2013 we tasked our Defence Ministers to deepen defence cooperation among our countries by drafting a Long Term Vision specifying our shared strategic objectives, strengthening cooperation in the field of training and exercises of the armed forces in the V4 format, and creating a framework for an enhanced defence planning cooperation. We thereby endorse the results achieved and, in particular, welcome the adoption of the Long Term Vision this March. The areas of cooperation stipulated in the Long Term Vision, and subsequently identified opportunities for common V4 defence projects and cooperative ventures provide the sufficient foundation for the New Opening in our defence relations. We encourage further efforts in implementing these forward-looking ideas.

In accordance with the Long Term Vision and other documents approved during the Hungarian V4 Presidency we are committed to make further progress in our defence cooperation. We will use the recently designed structures to identify areas of practical cooperation and pursue specific projects in the field of defence capability development including joint development projects and military equipment acquisitions. In this process we support the involvement of V4 national defence industries as much as possible. At the same time we are open to cooperation with other partners outside the V4 where and when useful.

Cooperation among the V4 national defence industries will be further explored in the field of research and development as well as production, in order to provide efficient solutions for the capability needs of our armed forces and to strengthen our national defence industrial base. An example of a mutually beneficial industrial cooperation project could be the common development and procurement of a universal modular tracked platform or wheeled armoured personal carrier. In addition to new capability development projects, previously agreed or running regional initiatives including the Smart Defence project on pooling CBRN capabilities and the Joint Logistic Support Group need to be implemented.

We will continue preparation for the V4 EU Battlegroup (V4 EU BG) to be on stand-by in the first half of 2016. The Visegrád Battlegroup serves as a linchpin for our defence cooperation in the area of training, exercises and capability development. The current security situation in Europe underlines our intention to link the V4 EU Battlegroup certification exercise with NATO’s Trident Juncture 2015 exercise. Based on the experience gained during the creation of our EU Battlegroup, we see merits in establishing a permanent V4 multinational force.

We endorse the commitment of our Defence Ministers to organize annual V4 military exercises starting from 2015 focused also on collective defence according to Article 5 of the North Atlantic Treaty. These exercises will be essential for our armed forces to remain interoperable. In this context, involvement of other regional partners, as well as the U.S. forces is desirable. This is our contribution to NATO’s Connected Forces Initiative and also supports the implementation of reassurance measures to enhance our collective defence and deterrence.

The aggression of Russia against Ukraine and the subsequent annexation of Crimea have changed the security environment in Europe and made us re-think our defence posture. We are determined to actively and substantially contribute to reassurance measures within the Alliance. These events could also provide stimulus for further cooperation. We recognize the increasing importance of Multinational Corps Northeast (MNC NE) in the region. We also welcome the MNC NE framework nations’ work to enhance its operational capabilities and usability as a platform for regional defence cooperation.

The crisis confirmed that NATO, founded on strong bonds between North America and Europe, continues to be the cornerstone of the transatlantic security and collective defence and an essential forum for security consultations. Keeping the transatlantic partnership strong and stable is in our shared and vital interest. We look forward to the upcoming NATO summit in Wales as an important opportunity to show the strength of the transatlantic relationship and provide a credible and comprehensive outlook for the Alliance beyond 2014.

Healthy partnership also means fair burden-sharing. Here, we commit ourselves to invest sufficient resources in our defence and reverse the negative trends of the past several years. Our ambition is to gradually increase our defence spending towards the threshold of 2% of GDP and allocate appropriate portion of our defence budgets to modernization projects with the aim to develop new defence capabilities. At the same time, we will ensure maximum efficiency of how we spend our defence budgets.

The V4 brand is already recognized by our Allies and Partners. We are committed to continue our common efforts to be a visible element of the global security environment in line with the EU strategic tasks set up by the European Council in December 2013, as well as part of the “European share” in the transatlantic relations by generating our own creative defence solutions.
Therefore, we, the Prime Ministers of the Visegrád countries, task our Defence Ministers to further enhance our defence cooperation by:

– preparing the Action Plan of the V4 defence cooperation during the Slovak Presidency;
– elaborating the V4 Training and Exercise Strategy during the Slovak Presidency;
– exploring the possibility of strengthening cooperation among V4 defence industries in the field of research and development and production;
– exploring options of the common development and procurement project of universal modular tracked platform and wheeled armoured personal carrier;
– exploring the possibilities of forming a permanent V4 modular force which could be used as a Visegrád contribution to NATO and EU rapid reaction forces as well as in crisis management operations, building on the experience and knowledge gained through the preparation of the V4 EU BG.

We, the Prime Ministers of the Visegrád countries, task our Defence Ministers to report back to us at the end of the Slovak V4 Presidency about the progress achieved in these areas.

Budapest Declaration of the Visegrád Group Heads of Government on the New Opening in V4 Defence Cooperation.