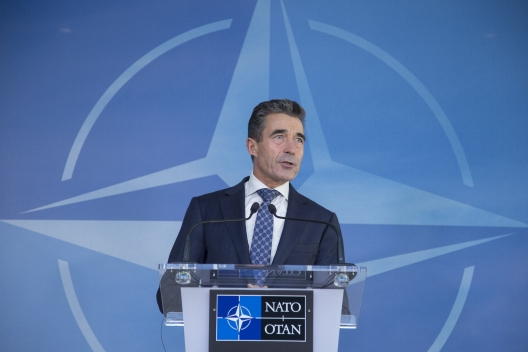 As Russia completes its invasion and eventual annexation of Crimea — and possibly threatens more Ukrainian territory — one can be forgiven for asking, “Where’s NATO?” With NATO Secretary General Anders Fogh Rasmussen in Washington this week, perhaps we’ll find out. . . .

No NATO territory has been invaded by Russia, so NATO’s collective defense commitment has not been formally tested. But NATO allies in the East — the Baltic States and Poland, for example — are rightly worried about Moscow’s intentions. And, perhaps even more importantly, non-allies — such as Moldova, Georgia, Ukraine, and Azerbaijan — are watching to see whether NATO pushes back, or accedes to a revived Russian sphere of influence over pieces of the former Soviet Union. . . .

In the wake of Russia’s imminent annexation of Crimea, here are a few specific suggestions of what NATO — with strong U.S. leadership and participation — should and can do:

*  Shift the logic of NATO action, from partnership to defense and deterrence.

*  Issue an iron-clad statement articulating the absolute commitment of the alliance to defend the territory of all NATO member states, no exceptions.

*  To back up this commitment to collective defense, update and put in place defense and exercise plans for each and every allied member, and strengthen air defense assets deployed to the Baltic states.

*  Determine that any further assaults on Ukraine’s territorial integrity beyond Crimea represent a direct threat to NATO security and, accordingly, issue a statement saying that any such efforts to break off more territory will be met with a NATO response.

*  Task the NATO military authorities to draw up contingency plans in the event of a Russian military invasion or subversion of eastern Ukraine.

*  In concert with the European Union, NATO should sell new military equipment to the Ukrainian armed forces, based on U.S. and EU loan guarantees.

*  Also in concert with the European Union, agree to an embargo on arms sales to Russia, including French “Mistral” ships and German live-fire training gear.

*  At Prime Minister Yatsenyuk’s request, provide NATO-country advisors and trainers to assist the Ukrainian forces in defending their country.

*  Counter increasingly rabid Russian propaganda pitched at ethnic Russians in Eastern Europe with increased funding for broadcasting outlets such as Voice of America, Radio Free Europe, and local efforts — such as Latvia’s center of excellence in strategic communications.

Kurt Volker is Executive Director of the McCain Institute for International Leadership and a former US ambassador to NATO.